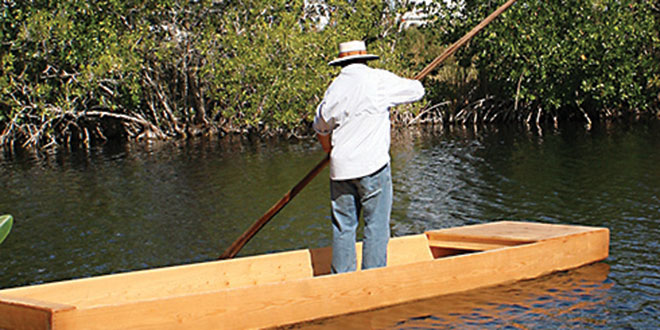 The event marked the preserve’s 40th birthday and brought together a diverse group of people with a shared appreciation of Everglades’ history and protection of its resources.

Representatives from the Miccosoukee and Seminole tribes were on hand, demonstrating traditional beading, carving and weaving crafts and speaking on the role of their ancestors in shaping South Florida.

Jack Shealy, founder of Collier Seminole Nature Tours, and his guides Jules Brown and Danielle Swisher, displayed and demonstrated Shealy’s handcrafted poleboats, a traditional skiff modeled after the early settlers’ vessels. Originally made of Cypress wood, the modern version is a combination of cypress and marine plywood, fitted for tours with removable seats. Brown explained that this type of tour is very intimate allowing participants the chance to literally brush against the 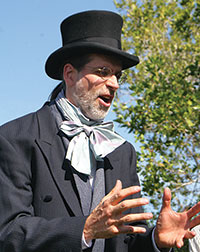 Taking a step back in history, three members of the Big Cypress Outreach project— a program providing educational activities for area sixth graders — provided first-person accounts of their contributions to area history and conservation. Will George, dressed as the New York-born archaeologist and ethnologist Frank Hamilton Cushing, captivated the audience with his escapades in the late 1880s in Key Marco where he claimed to dig up “amazing artifacts,” such as smudge pots and knives with imbedded shark teeth.

Unfortunately, once the finds were dredged from the muck of the mangroves and exposed to air and light, many pieces warped, cracked or disintegrated. He estimated that 25 percent of his haul was lost and 50 percent deemed unrecognizable. Nonetheless, Cushing sent 13 barrels filled with artifacts in sealed crates to his associate Dr. Pepper in Philadelphia.

When Cushing took ill, he continued to write his 1,000-page report bedridden in Maine. In the meantime, he was accused by the New York Herald of “doctoring” his artifacts. The paper never published the pictures of the artifacts they claimed were 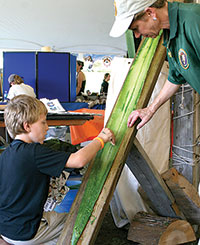 fakes. Cushing’s collaborator, Dr. Pepper, passed away, and he pushed aside his Florida manuscript to pursue field work elsewhere. He died in 1900 after choking on a fish bone and eventually the paper was completed by historian Moses Sawyer.

Guy Bradley, portrayed by Luke Gommermann, was a bird hunter turned game warden in Monroe County. In the early 1900s, it was fashionable for women to adorn their hats with exotic feathers, causing extensive pillaging of South Florida rookeries. A single plume could fetch as much as $10, Bradley explained, comparing the amount to what the average milliner earned in a week! Egret, ibis and herons by the hundreds filled the Everglades, he reported, but on a return trip to Florida, the same rookeries were “shot out” apparently during nesting season, which runs between July 15 and April 15, decimating the bird population.

In May 1901, the Florida Bird Protection Act was passed outlawing the purchase or sale of a bird or part of a bird. Violation of the act incurred a misdemeanor fine of $5 and/or imprisonment. Bradley maintained an office 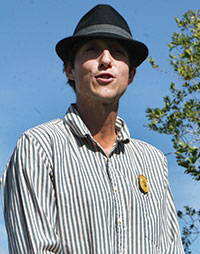 in Key West and was notified by telegraph of poaching activity. In 1905, Wade, one of Florida’s first environmental protection officials was shot and killed by poachers in an attempted arrest.

Born in 1890 in Minneapolis, Minnesota, Douglas came to Miami as a young journalist. “I wrote a column for the Miami Herald,” she explained.

During a houseboat cruise through the Everglades in the 1930s, she was awed by “all of the birds feeding on the Gulf, flying back to the sunset.” She recalled an enormous full moon shining over the boat and at that moment declared, “The Everglades is outstanding national park caliber.”

In 1947, she published “The Everglades: River of Grass” and successfully redefined the notion that the Everglades possessed enormous value and was not just “worthless swampland,” prime for drainage and development. The Grande Dame of the Everglades passed away in 1998 at the age of 108.