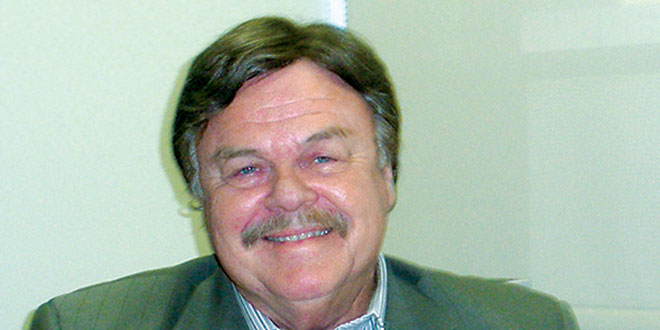 Count Ken Bennett among the legions of people who have fallen in love with Marco Island.

Bennett is the new managing partner at Berkshire Hathaway HomeServices’ Marco Island office, a post he assumed four months ago.

“I love the beach,” he said. “I think it’s one of the most beautiful beaches I’ve ever seen. I like the laid back feel here. The people are all very friendly. It’s a much slower pace of life, which I think is great. It’s a little paradise, and it’s a well-kept secret, too. The whole lifestyle is just beautiful. It kind of reminds me in ways of the beaches of Southern California when I was growing up.”

A Los Angeles area native, Bennett managed an independent real estate company in the Orlando area for 15 years before coming to the island for his new job.

The move represents a return of sorts for the former defensive end and tight-end who was a football teammate of Mark Harmon, star of the CBS hit “NCIS,” at Los Angeles Pierce College. When Bennett first came to Florida in 1994, he worked in Fort Myers managing an office for Prudential realty and became a fan of life in Southwest Florida.

“I always wanted to come back to the Gulf Coast because I think the lifestyle here is so much more relaxed,” said Bennett.

Bennett’s time with Berkshire Hathaway began a little more than six months ago with a meeting he had in Orlando with Brigid Peterson, the company’s vice president for the state’s west coast. She mentioned that there a management opportunity on Marco, and he was immediately interested.

“I said, ‘You’ve got to be kidding because that’s the jewel of resort areas,’” he said. Next came a meeting with Reinaldo Mesa, CEO for Berkshire Hathaway HomeServices Florida Realty, and after a few week’s consideration, Bennett decided to seize the opportunity.

By “we,” Bennett was referring to his fiancé Lisa Ranalli, who has remained in Orlando until their home there sells.

There was an element of chance involved in the journey that led Bennett to a career in real estate. After college, he enlisted in the US Navy in 1973 rather than be drafted and was fortunate enough to spend his six years as a sailor working in for the office of the Chief of Naval Personnel in Washington, D.C.

When he decided to re-enter civilian life, Bennett made his way to a job fair at a Marriott hotel in Washington, where he met a man named Herb Pinkerton who changed his life.

So Bennett went to real estate school and got his license in Maryland, and upon his discharge, he began his new career in 1979. “I immediately had a lot of success with it,” he added. “It’s been a good career for me.”

As a manager, Bennett said the part of his job that he finds most fulfilling is helping the people under his charge find success, especially those who are new to the business.

“It’s really gratifying to build that relationship with them from the very beginning and to be instrumental in their first few transactions and then watch them go on to be superstars in the business and generate the sort of income that a lot of people would love to have,” he said.

Bennett is encouraged by what he’s seeing from the condition of today’s real estate market, which is more slow and steady than booming, as it was in the early part of this century.

“I think what we like to see in this industry is steady growth, consistent growth; I think that works well,” said Bennett. “When you have radical stages where things go up 15-20-30 percent per year, things can get crazy, and I think we proved that fairly well back in ’07 and ’08. That type of wild, uncontrolled growth just isn’t healthy for anybody at the end of the day.

“We’re seeing a tremendous pick up in our business,” he added. “The average sales price is growing at a very reasonable rate here on the island, which is good. Our inventory is down quite a bit both for single-family homes and condominiums. Our available building lots are up a little bit, which is interesting, but we’re seeing good growth in overall values. We had a great December in this office, and as a company, I think that portends well for our seasonal market, which extends through April, May of this year.”