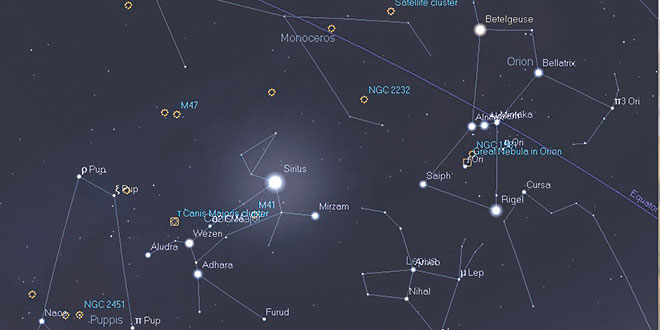 Looking south, 9:00PM Apr 3. See how many star clusters you canfind with your binoculars in the Milky Way.

Shining high in the sky tonight in the southeast is the bright star Procyon in the otherwise non-descript of Canis Minor – the little dog. Canis Minor processes but two stars – Procyon being the brightest. Procyon is larger, hotter and brighter than our Sun, but the primary reason it’s the seventh brightest star in the sky is that it is so close to us, only 11.46 light years.

Procyon is thought to be approaching the end of its life and will soon become what is known as a red giant star and expand to over 80 times its present size with a corresponding increase in brightness. It won’t be soon on a human time scale though. The expansion probably will not start before 10 million more years elapse. After the red giant phase is over, Procyon will shrink down to a white dwarf star not much larger than the Earth – too dim to make out without a telescope.

Procyon’s name comes from the Greek “prokyon” meaning “before the dog”. It comes by this name by rising before its neighbor Sirius the dog-star in most northerly latitudes. This is untrue on Marco Island, however. Sirius beats out Procyon by a couple of minutes.

Between Procyon and Sirius lies a very obscure constellation called Monoceros, the unicorn. You won’t be seeing it tonight with the Full Moon in the sky. In a couple of days look again, Monoceros will still be hard to spot but with your binoculars sweep the area and you may be rewarded with the sight of several star clusters. M47 is perhaps the brightest of these.

As long as you have your binoculars out, look at Jupiter. It’s very high and bright in the eastern sky, nearly overhead – you can’t really miss it even with the Full Moon shining. With ordinary 7×35 binoculars it is easy to see up to four of Jupiter’s satellites although just seeing two or three is common. Holding your binoculars rock steady will help you get a good look; try resting your elbows on the roof of a car if you don’t own a tripod.