Before the Calusa, Who Was Here? 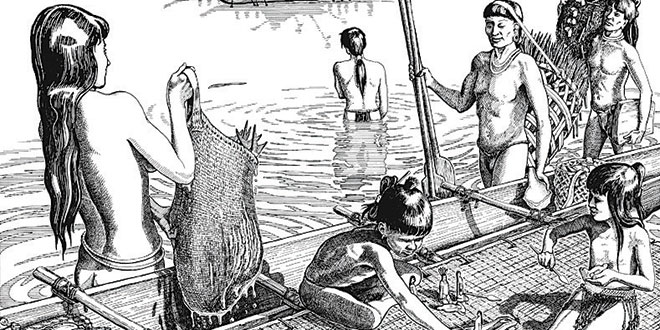 Just about everyone who visits this area is aware of some of the recent native American inhabitants of South Florida. The Calusa indians controlled the waterways from the Florida Keys as far north as Tampa Bay. The Seminole and Miccosukee roamed the inland areas and the Everglades while even more tribes settled other regions of the state. In fact, when Christopher Columbus first came to this part of the world, it is estimated that there were more than 300,000 natives in Florida.

Many of these Indian nations did not have a written history, and it seems that stories passed from one generation to another have been forgotten, leaving us to piece together any information through the discovery of artifacts and bones. The rest is all speculation, theory and a reliance on geological science, so it’s hard to say who was here before the Indian nations that we’ve learned about but let’s explore one of the more popular theories available.

If you stood on Marco Island beaches 20,000 years ago, you would have to walk another 50 miles or more before you could go swimming. We were in the midst of an ice age, and when very cold weather dominated our planet like that, ocean levels and water levels in general around the world were much lower. The Florida peninsula had nearly twice the land mass that we see today.

Since the water level 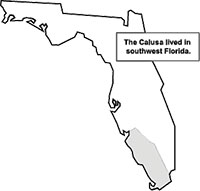 was so much lower at that time, a land bridge existed between present-day Asia, Alaska and what is now the Aleutian Islands. The waters were 400 feet lower, and this land mass was nearly 1,000 miles wide. It is thought that several groups migrated to enter and populate North America, eventually reaching Florida about 14,000 years ago.

Known as Paleoindians, these early inhabitants camped near many fresh water sources of Northern Florida and probably moved from one to another. As glaciers continued to melt and Florida became a wetter land — around 9,000 BC — the nomadic habits of these dwellers disappeared, and a more sophisticated lifestyle began. This settling brought on a need for dwellings of a more permanent nature as well as the need for pots and utensils. The populations of different geographic regions throughout the state developed individual cultures, according to their needs and their environment. When a village became too big, one or more families would break away to form a new community nearby.

By 3,000 BC, Florida became the land that we see today. By 500-700 AD, farms developed, and a sense of social cooperation to work the fields, store produce, protect the lands and to harvest crops became necessary. This type of society thrived in Northern Florida.

However, the lands of South Florida were not really suitable for the corn, beans and squash that the northern tribes grew, so Indians here learned to rely on the animal life and sea life 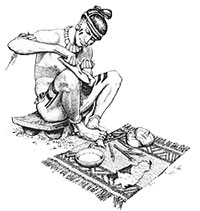 for their sources of food. In order to protect the sources of food along the shorelines, several tribes like the Calusa gained very fierce reputations.

The Calusa ruled our region for nearly 2,500 years. They successfully fought the Spanish, who wanted their lands, and defeated all intruders for nearly 200 more years. As the Spanish, French and English settled North Florida and decimated Indian populations there, the fate of the Calusa was all but sealed. The combination of new diseases, military encounters and forced labor ended their existence.

Stepping stones….This ancient civilization braved a land bridge, carved a path through glacier filled territories and made their way to what is now our paradise. More than 100 tribes spread throughout the state, many whose names will never be known. For 14,000 years, they improved their society.

I embrace their spirit. I honor their ability to expand and explore, their presence of mind to develop cooperative communities. Though they are gone, long live the adventurous nature of these free people!