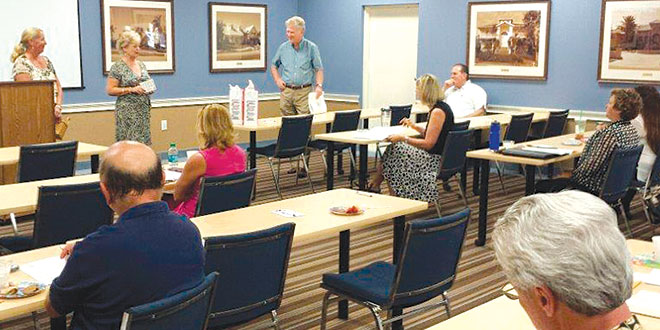 The Marco Island Area Association of Realtors is offering a new designation for local Realtors. Agents who complete the four-module course “to learn all things Marco Island” will receive a “Specialist Designation” through the MIAAOR.

Currently, the local Realtor group is conducting its inaugural class now, and the course will be offered twice a year, May and October.

“The ‘Marco Island Specialist Designation,’ like any other leadership development course, will help each Realtor member garner more knowledge about their surrounding area and those businesses who support our real estate community, ultimately benefitting the clients they deal with on a daily basis,” explains Bette McGilvray, president of MIAAOR.

According to McGilvray, the idea for the “Specialist Designation” was sparked by an executive committee outing to an awards ceremony for another Realtor association. There, the group noticed that the host organization had developed a specialist designation for its area. “We thought why not develop our own for Marco Island?” notes McGilvray. “So with the guidance of Kandy Sweeney, our communications director, and our Professional Development Committee members and Chair Gary Elliott, our Marco Island Specialist Designation was born approximately one year later.”

The course fits perfectly into the theme for McGilvray’s MIAAOR presidency: “Professionalism Through Education Exemplifies Marco Realtors,” and consists of four modules:

MIAAOR officials believe the topics covered in the course are of great importance to the Island, giving Realtors detailed knowledge as well as a personal connection to the expert discussing each topic. Upon completion, participants receive a diploma, pin and certificate, and they will be considered a Marco Island Specialist under this designation to better serve their clients.

The association also has brought together a five-star team of sponsors and instructors to make this course a reality. Sponsor Dawn Norgren is the RSN (Realtor Support Network) chair and part of the Island Title 5 Star Closing Team, which is celebrating its 32nd year on Marco Island.

“We are very excited for this latest endeavor and truly believe that the specific information the participants will receive will greatly enhance its members appreciation for our very special piece of paradise and will help inform the buying public of the same,” says Norgren.

Jack McStravic, building official for the city of Marco Island

Nancy Richie, environmental specialist and acting manager of code compliance for the city of Marco Island

McGilvray is certain the current market climate will bolster the success of those with the “Specialist Designation.” After all, Collier County is one of three counties to which the wealthiest are attracted, bringing baby boomers (8,000 daily turning 65) in droves. Additionally, home prices will projected to continue their rise for the next 12-24 months, and Marco Island, which recovered better than the rest of the country because of low inventory and increased buyer traffic, will continue to shine.

“It should be noted that the inaugural class consists of a number of seasoned real estate professionals as well as new licensees,” she adds. “This tells me that this is a course our members have been waiting for and one that will set each designee apart from other agents on Marco Island.”

Ben Rouleau,MIAAOR Board of Director