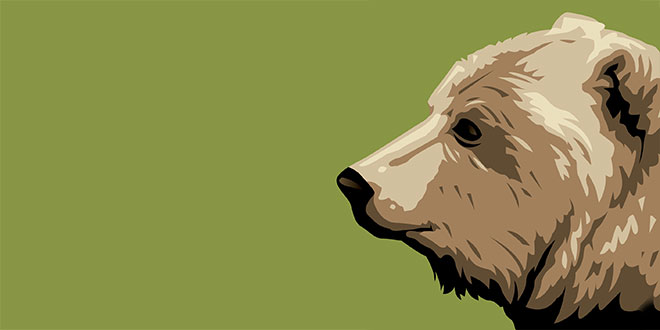 Bears are such cuddly creatures, aren’t they? All the bears I have met are cute and cuddly.

My first meeting with a bear I called “Honey” occurred when I was 7 years old, and enjoying being the youngest child in the family until Mom brought home our baby brother. With my position as family baby quickly usurped, I could have been damaged for life had she not had the wisdom to bring me Honey at the same time.

Did I mention that Honey was quite stuffed? That year, the largest department store, which also sponsored the annual Santa Claus parade, introduced the honey bear, which was a light brown and golden yellow teddy bear instead of the usual two-tone black and white to which I was accustomed. Now, I can imagine all the bear aficionados jumping up in alarm wondering about my ignorance of the origin of the Teddy Bear, which was garbed in brown fur and named for President Theodore Roosevelt, Jr. At that age, I had no knowledge of history, and the only thing I realized about Honey was he was able to keep a secret better than anyone I knew, and he quickly became my closest confidante. He was so sympathetic to all my woes and never uttered much more than a squeak when his stubby little tail was squeezed. Isn’t it odd, how most stuffed bears are referred to as “he” and not “she” as in Theodora?

I’m not sure what happened to Honey eventually, but I assume that when I left home the remnants of his shabby body were consigned to an equivalent of Goodwill along with my blankie. In subsequent years, at least a dozen of his relatives have found their way into my life. Most of them are big, brown and very huggable. However, there is something missing: None of them has ever been the recipient of my secrets. But one fellow, if you hold him closely, actually has a heartbeat.

It was rather tragic, I thought, when the Teddy Bear Museum closed its doors. Such a wide variety of bears called it home. I can just imagine them all coming to life when the doors closed each night, enjoying a well-attended Teddy Bear Picnic. Does no one treasure nostalgia any more?

My next bear encounter fortunately was from a distance, as a rather large one decided to use our dock in Canada as a place for bringing the family for refreshments. It was a little disconcerting to say the least, and encouraged me to acquire firearms training, a license and a 12-gauge shotgun. I didn’t intend to go hunting, and from the kick and bruises caused by that shotgun, I really hoped I’d never have to use it for protection.

We had an abandoned apple orchard on our property and I’m sure that was part of the attraction. One night I returned home from a party, setting the remnants of an apple cake on the trunk of my dusty black car before opening the door to the house and taking it inside. It was late, and rather than put the car in the garage as usual, I left it outside.

I got several surprises the next morning. There, in the dust on the trunk of the car were perfect paw prints. In addition, Brownie had upset all my flower pots, most likely sat in them, then wiped his furry, muddy rump along all the picture windows. Was that his way of expressing disappointment over not finding the apple cake? Aside from occasional sightings, we had no close confrontations with the bear.

I really believed moving to Florida would be the end of bears except in zoos. As you know, that is not the case. Bears are everywhere, and lately, they seem to be pretty common and rather bold. We are warned to keep pet food and trash well covered or inside, but obviously that isn’t enough. No longer can you feel safe anywhere, as shown when a bear was sighted right near the corner of Vanderbilt Beach Road and the Tamiami Trail in Naples recently, as well as in gardens, pools and patios. The Florida Fish and Wildlife Conservation Commission claim that some of the very relaxed bears have to be euthanized as they are too comfortable around humans. That might also be a warning for humans: Don’t get too relaxed around bears!