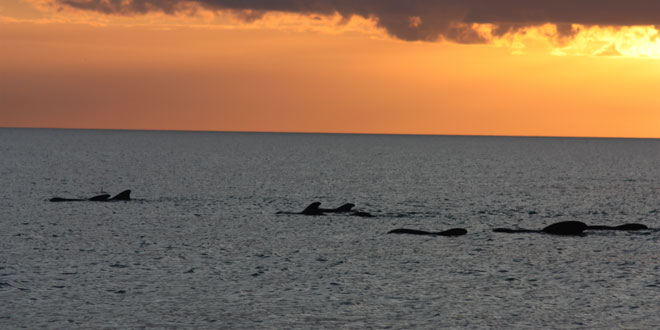 The reason for the recent strandings is unknown.

On Monday, January 20, this pod of pilot whales was found stranded at Marco Pass at sunset. The pod was ushered out to sea and was last seen on that day about two miles offshore. These whales were initially spotted in Naples on Sunday, January 19 near Gordon Pass in Naples Bay.

At the same time, another pod was stranded in Lee County. After a long, tireless effort, rescue attempts came to an end. Of those stranded, eight died over two days, four of which were euthanized by veterinarians.

On Thursday, January 23, a total of 25 deceased pilot whales were found on Kice Island, just south of Marco Island, according to NOAA. Initially spotted by a boater,

Sea Tow assisted FWC and the Sheriff’s Office in guiding the whales out. Photos By Kirk Gardener

16 females and nine males were found. NOAA has also identified these as the same pod that was seen off of Marco on Monday and in Naples on Sunday.

Necropsies of all the pilot whales will be performed along with those which beached themselves in December. At that time, close to 50 pilot whales were stranded in the Everglades; several died.

While it will take quite some time before results return from the necropsies, possibilities for the incidences have been discussed from virus, impacts from the Caloosahatchee discharges last summer, sonar from the Navy or other pollution possibilities. No definite conclusions have been confirmed.