Be On the Lookout for the Kingly American Kestrel 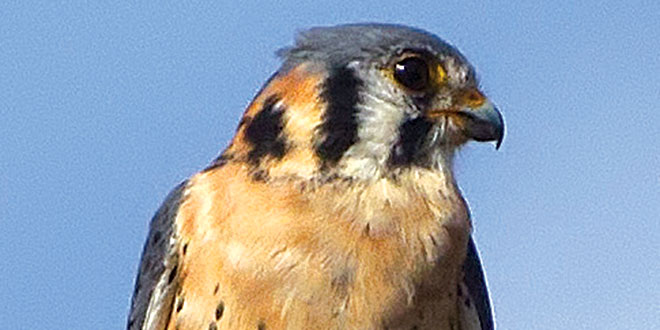 On Marco Island, an urban, intensely developed island, surrounded on three sides by dense mangrove estuary habitat and one side by the Gulf of Mexico, it really is not uncommon to see a variety of wildlife in our yards and along roadways. Driving through several island neighborhoods one recent cold November morning, more than a dozen American Kestrels were observed in just a few hours. All of these small raptors were spotted on electric lines, perching, some swooping over the grassy empty properties with their distinct “klee klee klee” call — sometimes a high-pitched “killy killy killy” — that can be heard easily, and all near burrowing owl burrow sites.

The American Kestrel (Falco sparverius), known commonly as the sparrow hawk, is one of the smallest and most common of falcons and the only kestrel of North America. Just 9-12 inches in height, weighing between 3-6 ounces (or as much as 34 pennies!) and with an average 21-inch wingspan, this beautiful bird is small but powerful.

Its coloration is magnificent, like a king dressed for court. The male has an uncommon slate-blue head and wings that contrast with its rusty back and striped tail. The females do not have any blue colors but are rusty and reddish browns. Both male and female share a light buff-colored breast with some barring and spots. Both also have black vertical slashes over their eyes that are referred to as black “sideburns” or even called a “mustache”. The female has more black stripes or bands on her tail; the male just one.

They live in a variety of habitats, but require open areas to hunt, a few tall trees to perch and cavities, such as dead trees, or natural crannies in their environment and in buildings to nest and raise their young. With these requirements, the species is in rapid decline across the country. So much so that since the 1960s, a 50 percent decline in the population has been accounted each year. On Marco Island, they are seen during the day on electric light posts and wires, perched on the tiptop of palm fronds or a corner of a roof, actively searching open areas for prey, such as insects, lizards, even small snakes and small birds, such as doves and, if the season is right, unfledged burrowing owl chicks. They hunt by day, swooping in on prey on the ground and carrying their catch back to their perch to feast.

Many are dependent on manmade nest boxes to produce their young in most areas of the country. They also use cavities in dead or dying trees like the woodpeckers. Kestrels, though fierce raptors, do compete with woodpeckers and even the European Starlings for nesting sites. As birds of prey, the male and female 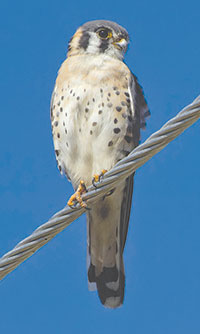 will pair up and mate for life and do typically nest in the same location each year. They can have up to five light, buff-colored, speckled eggs, with only one or two young surviving. Predators, such as raccoons, crows and other raptors, such as Cooper’s Hawks, red-shouldered hawks, barn owls, great horned owls and screech owls, will rob the nests for eggs and flightless young.

The female will sit on the eggs with the male feeding her for close to 30-35 days of gestation. The male will cover the eggs when necessary to maintain a constant temperature. Both the male and female will feed their chicks, and it is a full-time job as the chicks, growing quickly, eat twice as much as the adults for the first few months of life.

Once the eggs hatch, the young do mature quickly and can fly by 30 days of hatching and will be ready to produce their own families within a year. Kestrels can live up to 11 years in the natural environment, and it has been reported that a kestrel lived 17 years in captivity, but most only live one or two years on average due to natural predation, feral cat predation, pollution (such as overuse of herbicide and pesticide), automobile strikes and loss of habitat. For these reasons, this species is on the watch list as threatened.

The American Kestrels that live in the most northern United States, Canada and Alaska do migrate and winter in South Florida during the months of November through April. There is a year-round resident in South Florida, however, the Southeastern American Kestrel (Falco sparverius paulus). This subspecies to the naked eye is very similar in color to the northern migrating species but smaller. So, this time of year, it is easy to notice many more kestrels.

Due to the similarity to be sure you have identified a Southeastern American Kestrel, it would be one you observe in the summer months on Marco Island. Due to similar decline in numbers due to nesting and foraging habitat loss, the Southeastern American Kestrel in Florida is listed as a threatened species. The Florida Fish and Wildlife Conservation Commission does have a nest box design and program to encourage nesting if interested in helping this species. (www.myfwc.com).

When you are driving around Marco Island, take a closer look at the bird sitting on the wire or pole, it may be an American Kestrel, or if in the summer, most likely a Southeastern American Kestrel. Enjoy its beauty and strength, and know it is keeping the insect and small reptile population in check on our island. But, burrowing owls beware!

For more information on Marco Island’s beautiful and kingly American and Southeastern American Kestrel population or other wildlife, please contact Nancy Richie at 239-389-5003 or nrichie@cityofmarcoisland.com.