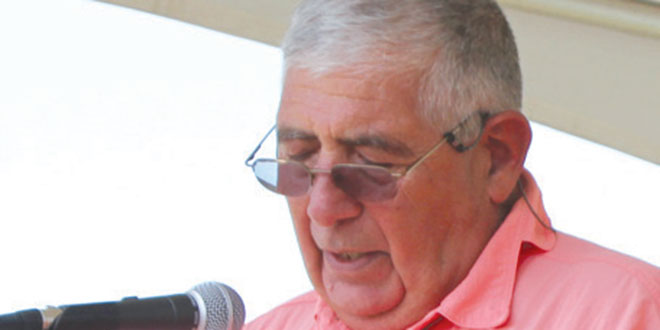 Joe Batte’s resume is an impressive one.

For the last four years and four months, he also has served Marco Island residents on the City Council, and he wants to do it again, looking to the Nov. 4 election. This will be his third campaign for City Council. While his first bid was unsuccessful, the motivation remains the same: Getting off the bench and doing something about the issues Marco Island is facing.

“The first time I ran for City Council, I came home complaining one day during the STRP. The roads were torn up, and things were a mess. My wife, Anne, looked at me and said instead of complaining about it why don’t you run for council and do something about it,” remembers Batte.

“It’s good when people get involved in city government, so I am doing something about it,” he adds.

Coastal Breeze News sat down with Batte to discuss his upcoming campaign, the election and the issues he feels are most important to Marco Island residents.

On the performance of the current City Council:“This council has a good track record of listening to the people. When I look at the make up of this council, I am proud to serve with them. In the last election, all of the incumbents lost. The people had a message for us. They were telling us something. This council is promoting the transparency people want. We promote the fiscal conservatism the people want. Without the people that elect you, you are nothing. I spend two or three days a week meeting with constituents…If I don’t do that, then why am I doing this?”

On citizen advisory boards:“I am a big supporter of the citizen advisory boards. They can help (the council) make good decisions. They are smart people, dedicated people, and they can help us make good decisions for the city…Now, we have a waiting list for these groups. I think that is because the people feel like we are listening. They know we are listening. I think people felt distant from their city council in the past. They want to be heard and want to be represented. We work for you. We need your help. We need your advice.”

On the Flag Plaza at Veterans’ Park:“Many times, I will come here and think about the friends and comrades I served with. They were great people. I support this park very, very much, and I am proud that we are making progress with it. We have terrific people on the volunteer committee who have done a lot of work. I want to push the city to be very supportive of the park. Money is a tough thing for us now, but people need to know that this is a place where we honor our vets. When you walk here, you know this is where we honor our vets. The freedom fountain will be a great cap on letting people know that. I will be looking to see if there is a way the city can help with that.”

On the Mackle Park Community Center Referendum:“It goes back to the STRP program for me. (The STRP) put such a serious wound in this community. The program is over now, and we have rebounded. But, it was a terrible time… The mistake the councils made then was that they didn’t bring the people along with them. A lot of people in the city didn’t want the STRP program. They didn’t vet it with the people…They didn’t fully answer or 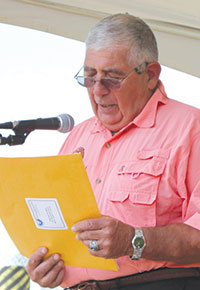 attend to the concerns the people had about the issue… If the people don’t want it and you don’t bring them along, then you are in the STRP situation again.

“We’ve tried to give as much information as possible (on Mackle Park), but this is not a decision that the council needs to make. It is not like the (Smokehouse Bay) bridge. I don’t need a referendum on the bridge. That is a health and safety issue, and those are the decisions that we are supposed to make…I know that this is a non-binding referendum, but it is not non-binding to me. If the people decide they don’t want this now, then that is it for me. I will never be in a position to say I know you don’t want it but I think differently. I can’t speak for everyone on council, but I happen to think we should do it. Mackle Park is an important place in our city. If you go over to Mackle Park, you see children playing and adults walking around the lake…The many increasing young families on Marco, they need a place to be proud of. The building is old. We need to do better, and putting money into an old building that is not going to serve the people the way they want to be served is not right. The price tag (on the new facility) is pretty darn good. I do not want put money into an old building that won’t serve today’s people or tomorrow’s people.”

On the Marco Island Police Department and finding a new chief:“I think we have a fine police department. People still ask why we need a police department on Marco when we pay for the Collier County Sheriff through our taxes, and a professional law enforcement person will tell you that you need a local presence, not an off-site one. You can’t have effective law enforcement without a local presence — not if they are going to give our people the protections that we need. You have to make sure you know what is going on.

“I wish Hunter was still with us. I feel like he tried to improve the department, and I think he did. We will continue to do that with the next chief, but I am no rush for Roger (Hernstadt) to make a decision (on the chief) because I know he will make a good decision. He will take the time to study and watch the performance of other people and make the right decision. I think he will take his time and deliberate. That is one of the traits I really admire about Roger, and I have a lot of confidence in him on this decision.”

On what is on the radar for Marco Island:“We have major PUD’s coming down the line, like the Beall’s shopping center. We still have the issues with the storage companies. We also have the 951 corridor and growth. This is probably something that concerns me the most in terms of dealing with the influx of people, and we have to be three steps ahead on this one. That is why reducing our debt and helping the city manager move his budget program forward is so important. We can’t be slaves to interest rates. We have a fire house that needs improvements. We have our pensions that we need to be very careful with, and we have unfunded liabilities to attend to.

“Council has had a full plate, but I watch the people on this council work. They are extremely confident. They didn’t come out of nowhere. Most of us have worked on committees from day one. They have given hours and hours of their time. They needed no training. They knew exactly what they needed to do. Whether I am on council or not, we have a good group of elected officials to moves us forward. They know the issues.”