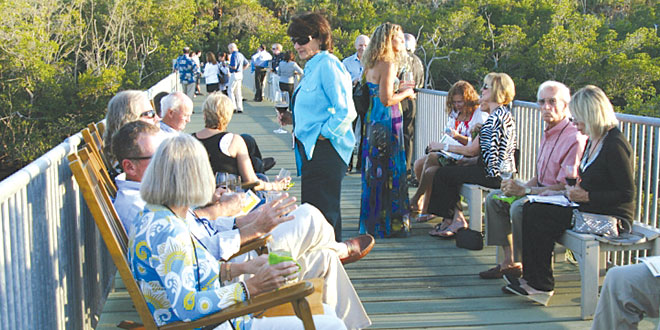 The Friends of Rookery Bay held the Fifth Annual Batfish Bash for the Bay Saturday, March 15, at the Rookery Bay Environmental Learning Center in Naples. Nearly 200 guests enjoyed a silent auction amidst the aquariums and art gallery, sunset and cocktails overlooking Henderson Creek, and a live auction followed by dinner and dancing on the center’s back lawn.

FORB is the non-profit corporation that has been connecting people with Southwest Florida’s dynamic estuarine environment since 1987. Its mission is to support the Rookery Bay National Estuarine Research Reserve, which protects 110,000 acres of coastal lands and waters between Naples and Everglades National Park. 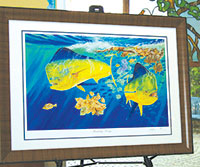 Guy Harvey donated a lithograph for the live auction titled ‘Breaking Away,’ featuring two dolphinfish in the open ocean.

the night could not have been more perfect,” said Craig Seibert, president of the FORB board. “We raised more money this year than ever before,” he added, saying the event raised $100,000 in total.

Silent auction items amidst the two-story exhibit hall delighted auction enthusiasts as they sipped on their Batfish Brew (the event’s signature drink), while servers passed hors d’oeuvres. They got some great deals on items like artwork, fishing charters, kayak tours, dinner deals, rounds of golf, wine tastings, and Red Sox tickets at Fenway Park. There was even a week-long stay in a lakeside cabin in Minnesota. All items were donated by local companies and other supporters.

Out under the stars, event participants enjoyed delicious food from Matthews and Gardner Catering. 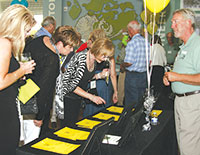 Guests at the 2014 Batfish Bash for the Bay bid on silent auction items.

After dinner was served, Chris Lombardo, the evening’s energetic auctioneer, kept everyone on their toes and grabbing for their bidding paddles as he sold all seven live auction items, including artwork by Guy Harvey, trips to New York City and New Hampshire, a boat tour and lunch with the Reserve Director Gary Lytton, and a getaway at a secluded cabin within the Reserve complete with a campfire dinner and boat tour. The headlining live auction item — a seven-day luxury yacht vacation in Belize — caused quite a stir in the crowd until the bidding ended at $3,400. A special category called “Fund-a-Need” raised a record-setting $9,300 toward the 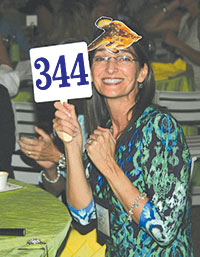 The winning bidder of the 7-day luxury cruise to Belize aboard the Sundancer II —valued at more than $6,000

purchase of a Utility Terrain Vehicle (UTV) to be used by the Reserve’s research and resource management staff for mapping the shoreline, prescribed fires, beach clean-ups and more.

Proceeds from the Batfish Bash for the Bay support the Reserve’s youth science education programs, research and habitat management. For more information about the Rookery Bay Reserve or Friends of Rookery Bay visit www.rookerybay.org.