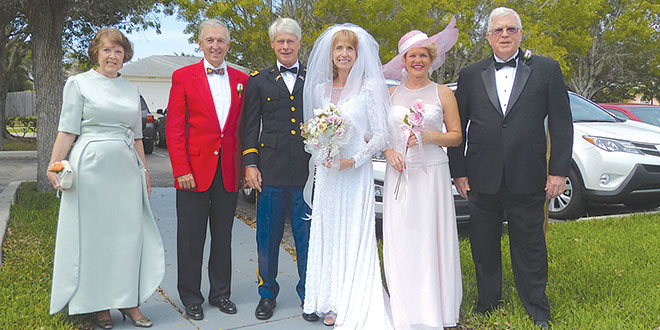 Many “ohs” and “ahas” were heard Thursday, Feb. 27, as the “bride,” Margi Abercrombie, was escorted down-the-isle by her “father,” Bob Meyn. The bride wore a beautiful full-length, over-beaded lace gown with a cathedral train, and dad was elegantly attired in a black tux.

Both outfits, as well as those worn by all the other members of the mock wedding party, were chosen from merchandise on sale at the Bargain Basket. The Basket currently has among its varied inventory, eight magnificent bridal gowns — complete with head pieces and veils. Manager Sue Woods stated that it would be possible to outfit an entire wedding party there for considerably less than the price of the bride’s dress in a traditional shop.

The annual fashion show at United Church of Marco Island on North Barfield Drive was attended by more than 200 happy guests. Chairwoman Juanita Henning and her committee did a delightful job of coordinating fashion ensembles, raffle prizes 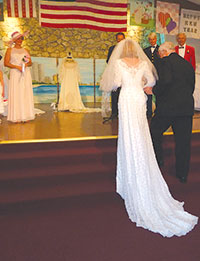 and table decorations, all from the merchandise available at the Bargain Basket.

A delicious luncheon consisting of a triple salad and cherry crumb cake was provided by Kretch’s on Bald Eagle Drive. Models were accompanied down the runway by Joan Marie on the piano and organ. In a special guest appearance, Miss Fanny Frugal (Judy Day), told all present how they could dress for even less than BB prices using cast-off place mats, a shower curtain, a table centerpiece and an imagination to create an ensemble.

Bargain Basket is an outreach mission of United Church that is located at 750 Bald Eagle Drive. For more than 30 years, it has been providing shoppers with remarkable values. It is stocked by donations and staffed by nearly 80 volunteers. The proceeds from sales are used to fund donations to local charities, such as Habitat for Humanity, Harry Chapin Food Bank, Woman’s Shelter for Abused Women and St. Matthew’s House, as well as others.