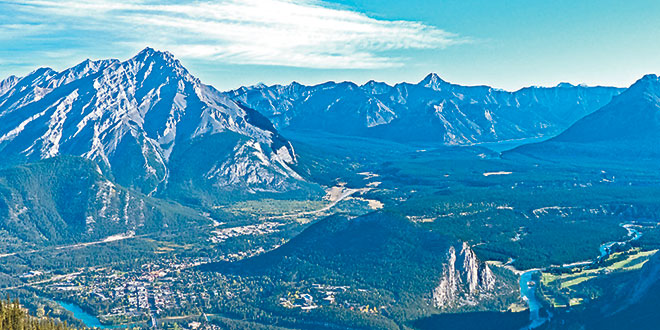 Ninety minutes from Calgary, in the Bow River Valley, Banff is the unofficial capital of Alberta’s Canadian Rockies. Located within Banff National Park, its development is tightly controlled. The population is capped at 10,000; only those with a “need to reside” can live there and businesses must provide accommodations for employees.

Banff was developed in the late 1800s for tourism; even the main street was built to afford the best views of nearby Mt. Rundle. Its commercial center, with its variety of stores, mini malls, restaurants, coffee and toffee shops, is very busy. What impressed me about Banff is how they handle pedestrian and car traffic in the downtown. At cross streets, there is a time in the sequence of green and red lights when all the lights turn red and pedestrians can cross every way, including diagonally, at the same time. Locals told me that the drivers like this format because they can make left and right turns easily without having to stop for pedestrians; for pedestrians, it is ideal.

Downtown is also home to both the Banff and Parks Canada information centers, which provide good walking, hiking, and driving maps. The Parks Canada bureau has one window devoted solely to hiking information. Banff Museum, located in an historic building at the southern end of the town, with its many species of preserved animals and original wood finish is a taxidermist and wood craftsman’s delight.

A public transportation system, ROAM buses, colorfully decorated with mountain wildlife, provides transportation throughout the area, including most of the tourist sites close to town.

Bow River Falls were featured in the 1954 film, “River of No Return.” Photos by Vickie Kelber

It affords a good opportunity leave your car and not have to deal with traffic and parking issues, particularly in the downtown area.

One of the most popular tourist stops is the Banff Gondola which whisks passengers, four to a car, up 8,000 foot Sulphur Mountain for a 360 degree view of the Bow River Valley and its surrounding 6 mountain ranges. There is an observation deck and restaurants at the top, but when we visited, the building was undergoing a $26 million renovation, so it was closed. It is expected to reopen by the end of this summer. A short walk from the gondola’s station takes one just a little higher for enhanced viewing.

The picturesque 30-foot high Bow Falls and its rapids are just outside of town, easily reached by car, public transport, or walking path. Its claim to fame is that it was featured in the 1954 film, “River of No Return,” starring Robert Mitchum and Marilyn Monroe. Reportedly, Ms. Monroe was injured filming the scene at the falls; she spent her time in Banff recovering from the injury while Mr. Mitchum enjoyed the local spirits and fly fishing. The word “bow” refers to a type of reed that grows along the banks of the river.

Tunnel Mountain Drive is a scenic route out of town from which wildlife is often seen and there is a stop overlooking the Fairmount Banff Springs Hotel. The hotel, built by the Canadian Pacific Railway and once the largest in the world, dates to the late 1800s. There is another stop along this route 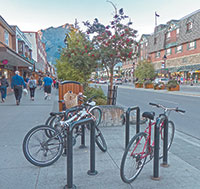 for a colorful panorama of the Bow River Valley and up close view of Banff’s hoodoos, tall, irregular rock formations. We saw elk on our trip along this road.

Cascade Gardens, hidden away a short walk across the river from town, are a series of terraced gardens, stone structures, and gazebos. They are nothing spectacular, but do provide a tranquil place away from the bustle of town and tour buses.

Mt. Norquay, one of Banff’s ski resorts northwest of town, provides another location for scenic viewing. A chairlift continues to operate after ski season to the top of the almost 7,000 foot mountain. It is very common to see wildlife on the trip to and up Mt. Norquay.

Lake Minnewanka, the largest body of water in Banff National Park, is a popular spot for walking, cycling, fishing, boating, a one hour narrated boat cruise, and its reportedly $1.8 million restrooms. Yes, they did cost $1.8 million; the nature photographs inside it were lovely, though. Nearby Johnson and Two Jack Lakes also provide picturesque lakeside walks; Two Jack has a campground. The Lake Minnewanka Scenic Loop is a drive from which all three can be visited.

The Cave and Basin National Historic Site is the location of the first hot springs discovered in this area in 1883 and the birthplace of the national park system in Canada. There is a Discovery Tour offered that gives an historical perspective of the area. Three miles away is Banff Upper Hot Springs where one can soak in its hot springs pool, visit the steam room, or receive a 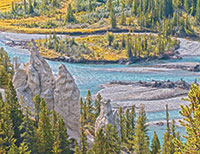 massage or aromatherapy wrap in the spa. Towels and even bathing suits can be rented at the Hot Springs.

Hiking opportunities abound in Banff. A few trails begin very close to downtown. The aforementioned Bow Falls Loop is an easy trail to the falls and then continues on to the Banff Springs Hotel. The Fenland trail is a flat, wooded trail along a creek dotted with beaver dams. The day we took it, we saw no wildlife except birds and squirrels, but did encounter a very fresh bear track. The Fenland Trail leads to the three Vermillion Lakes, which provide an important wetland area for migratory birds in the shadow of Mt. Rundle.

Sixteen miles from Banff, the town of Canmore, outside of the national park, offers a quieter and less expensive alternative to Banff. Once a mining town, its main street reminds me of a frontier town. Favored by artists, Canmore has restaurants, shops, spas, and galleries, along with a variety of accommodations. It was the site of the Nordic skiing events for the 1988 Calgary Olympics and its Nordic center is popular in both summer and winter. The ROAM bus service mentioned above links Canmore and Banff.