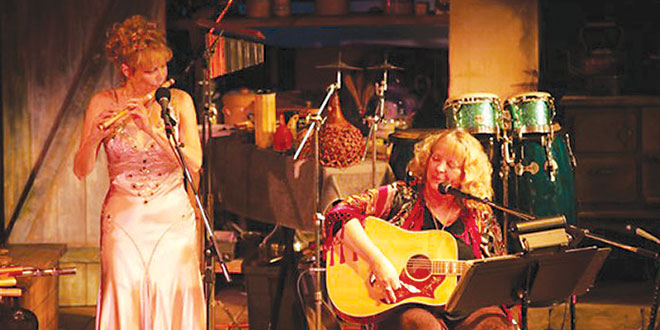 Banana Moon is the latest CD released by Marco Island resident Shirley Lorene. Shirley has been a commanding voice in the music industry for almost four decades. Banana Moon is the fourth CD Shirley has produced recently and will be a fan favorite for long time followers. It’s also a great introduction to her musical talents for those unfamiliar with her previous works. She has also produced many early records on the nostalgic 45 rpm vinyl.

“My goal at this point is to market the music that I’m writing,” says Shirley of her latest release. “I have so much music written, now I’m getting it recorded. It’s going out to

Ray Nesbitt lays down his track as Shirley looks on.

LA and all the places where it can be heard. I’m working with the top musicians in their field and it’s all come together in a great way.”

Since she was born, music has played a driving force in her life. Shirley learned to sing at the same time she learned to talk and would accompany songs playing on the radio. She picked up the guitar at age 10 and by 17 she was playing with the same guitarist Cher used during performances. She received a standing ovation during her first on-stage performance and that provided the impetus for launching a career.

During the late 60s and early 70s, she was a big part of the music scene. She has appeared with a veritable who’s who list of a generation: Moody Blues, 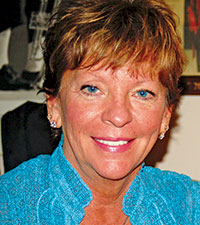 Shirley did four concert tours with Eric Burdon and the group War. “I was there when he caused a riot at Cheney Stadium in Tacoma in 1969. I performed first, and was all about peace and love. Then Eric came on and started a riot. I was 18 years old, hiding in the dugout of the stadium, hoping to make it out alive. Although Eric was done after that, I got to play with War three more times on tour. They were truly happy for me when the crowd gave me a standing ovation, even though they were the lead act.”

Shirley’s career would be 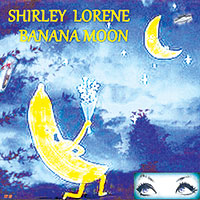 the envy of almost anyone in the music industry; the history, the names, the memories. These would satisfy most anyone, but not Shirley. At age 65 she’s going strong. She dares to cross genres with authority. Two of her CDs are inspirational in nature (“God music,” as Shirley calls it) and the vocals, as well as the musical score, will truly take you places. The flute, played by Kat Epple, really stands out. Much of it is blues, rock, Caribbean, and even a waltz-style tune thrown in – all in one place.

Shirley’s inspirations come in many forms. “Twice in one day, I was run off the road due to road rage. The second time I was shaking so bad and just grabbed a piece of paper and wrote down everything

In the studio recording Banana Moon

I was feeling. That song is ‘Shoot your Dream’ and is on Banana Moon just as I originally wrote it that day.”

There’s more… a lot more. But that is saved for another time when word count is not at a premium. To get your own Banana Moon CD, you can visit Shirley’s website (shirleylorene.com), go to CD Baby, Amazon or iTunes. Or just type “Shirley Lorene” into your favorite search engine. You’ll find a lot of information, including some great videos on YouTube.

When your Banana Moon CD arrives, grab your favorite beverage, get in your comfy chair, close your eyes and listen to the first track. You’ll swear you’re in the front row of your favorite venue, jamming along with Shirley and the band. “The beat goes on,” as Shirley likes to say. And what a beat it is.

One response to “Banana Moon Helps the Beat Go On!”