Balocki and O’Connell: Stories of Honor 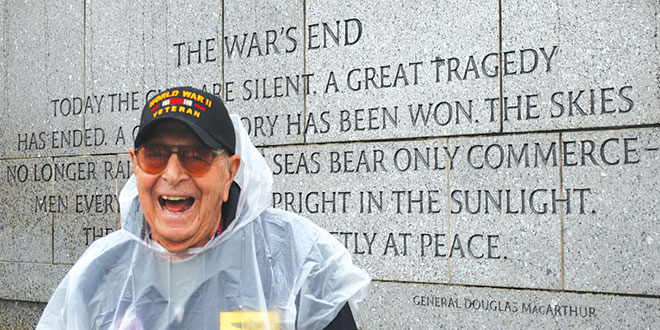 Rudy stands in front of a quote by Gen. Douglas MacArthur.

Rudy Balocki and Francis O’Connell have a lot in common. Both men were born and raised in New England — Balocki in Connecticut and O’Connell in Rhode Island. Both men now live on Marco Island. Both men joined the U.S. Army right out of high school, and both men fought in World War II.

Recently, both Balocki and O’Connell also were among the 75 veterans flown to Washington, D.C., on Saturday, Sept. 13, courtesy of Honor Flight of Collier County, for a whirlwind, police-escorted tour of the nation’s military monuments, including the World War II Memorial, Marine Corps War Memorial, Korean War Memorial, Vietnam Memorial, Lincoln Memorial, and Arlington National Cemetery and the Tomb of the Unknown Soldier.

The day started early with a flight from Southwest Florida International Airport to Baltimore-Washington International Airport. Veterans were greeted by a color guard and salutes from fellow travelers, and prior to take off, the airport fire department gave the Allegiant Air MD 80 jet a twin water cannon salute.

Upon their return, the veterans were greeted by a group of more than 1,000 people. Everyone from Boy Scout and Girl Scout troops, military bands and school groups to friends and family stood in a line three- or four-people 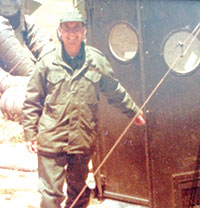 deep to honor the veterans with a hand shake and a salute.

“The trip was so wonderful and unforgettable,” says O’Connell. “It brought back a lot of memories…It was humbling, believe me.” He was particularly surprised by the welcome home the vets received: “Nobody told us that we would experience that. When we got out and looked around, there were people everywhere. These little children were standing waving flags and shaking hands.”

Honor Flight is the brainchild of Earl Morse, a physician assistant, Retired Air Force Captain and private pilot who wanted to honor the veterans he had spent his career care for. The inaugural Honor Flight took place in May 2005 when six small planes flew out of Springfield, Ohio, taking 12 World War II veterans on a visit to the memorial in Washington, DC. By the end of the first year, Honor Flight had transported 137 World War II veterans to their memorial.

Since then, an ever-expanding waiting list of veterans from Honor Flight’s network of 127 regional hubs in 41 states has led to the transition to commercial airline carriers to accommodate as many veterans as possible. To date, Honor Flight has flown more than 100,000 veterans to the nation’s capital to see their war memorial.

In the future, Honor Flight also will pay tribute to America’s other heroes who served during the Korean and Vietnam Wars, followed by veterans of more current wars.

To be sure, the Honor Flight was a long-time coming for both Balocki and O’Connell. Each had planned to make the trip a couple of times over the past few years, but circumstance and health issues had prevented them from making the 24-hour trip. This time, though, the outing went off without a hitch. Balocki was accompanied by his Guardian, Jim Prange, and O’Connell’s guardian was Mark Sturdivent.

“I have known Rudy forever,” explains Prange, who has served as a Guardian for other Honor Flight trips. “I was really excited at the opportunity to be his Guardian.”

Balocki was even able to share the once-in-a-lifetime experience with his daughter, Barbara Downey, and his grandson, Colin, who also were in Washington, D.C., at the time. Colin attends Georgetown University.

In the end, the Honor Flight experience was very personal for both men as well. For Balocki, it drummed up memories of being 17 1/2 years old when he was drafted into the Army: “When I went for my physical, I was

Francis O’Connell above and at upper right.

It reminded Balocki of his stint in basic training. First to Fort Devens in Massachusetts; then to Fort Gordon in Augusta, GA; then to Alabama to learn jungle warfare; then to Hawaii and Johnston Island; then to Fort Ord in California; and finally to the Phillippines. “I’d never even seen a gun before,” he recounts. “If it weren’t for the guys from the South that taught me shoot a rifle when we went to Georgia, well, I was lucky. I was to the only Yankee in the southern outfit; my nickname was Yank.”

He remembered his service in the World War II Pacific and the dangers that surrounded him and his fellow soldiers: “The monkeys saved our lives. We would send them up to get our bananas and coconuts in the trees. We couldn’t climb the trees ourselves without being shot. We couldn’t smoke at night because it would give away our position, so we would sit in the trenches just waiting for sunrise so we could smoke.”

He reminisced about the three months he spent as General Douglas MacArthur’s jeep driver: “The only memory I have that is good was when I was with MacArthur. I became the jeep driver 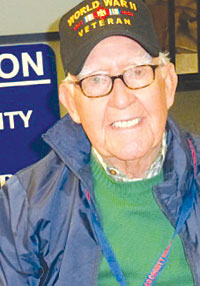 because the other driver had been shot. There were no good days. You didn’t know if you were going to see the next hour let alone the next day…He treated me like son. I had to be neat; no slop. Somedays, he would talk; somedays, he wouldn’t say a word. He was a general. He was an Army man.”

He also recalled the abrupt end to his Army career when the Red Cross came to tell him he was needed back home immediately: “When I was driving with MacArthur, I was invited to go with him, but I had to sign up for eight years…I always wonder what would have happened to me if I had gone with him for those eight years, but family duty called. I want back to work. I had to go to work. There were no ifs, ands or buts. I worked for 46 years for Stanley Works.”

O’Connell’s World War II service followed him his entire 43-year Army career, which included college at Brown University, working in various U.S. embassies, teaching at the Officer’s Candidate School, teaching marksmanship, working with an ordinance disposal crew, and helping prepare young soldiers to ship out to Vietnam during that conflict. 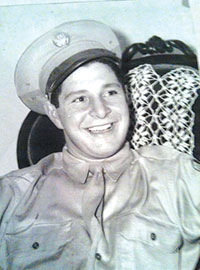 back to his journey from being drafted in 1943 to basic training at Fort Bragg, NC, to shipping out to Africa then to Sicily and throughout Italy then to France and then to Germany. He was a forward observer, and part of a crack team of five men — the fearless five — who sought out enemy targets for the artillery to fire on.

“I didn’t choose to do this; I was chosen,” he notes. “This was a duty I had to perform. I was very young and kind of stupid. I always thought this was it. I probably won’t see home anyway.”

The Honor Flight experience also transported O’Connell back to the five-month long Battle of Anzio and to the moment his team’s luck ran out in Southern France, when the fearless five were taken prisoner by German forces: “I was a prisoner of war for about a year…We were taken to a prison camp near Munich. They took us out every morning and into Munich, and the job they gave us was to fill in bomb craters after aircraft bombings by the Americans and British. Then, they came in the building one day, and took us out and put us on a truck. They took us 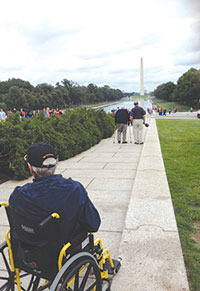 to a forest where we cut down trees and moved them to the roads for transport.”

He relived his liberation by the U.S. 16th Armored Division: “The Germans marched us to the Austrian border where we encountered the 16th Armored Division, and they liberated us on the road. We were always held down by the guards. We didn’t have too much food to eat. Not much clothing. That was the winter of 1944-1945 in Germany. I was very weak, tired and sick; I weighed 89 pounds. They took us home in a ship, and I spent three months recuperating in a hospital in New York State. They wouldn’t let my parents see me until I was well enough to leave. I was 20 years old.”

O’Connell contemplated his time in combat and as a prisoner of war and the aftermath of both as well: “There were so many of us that went through the same thing, and so many of us never came home. There were many years after I first came back that I never talked about it. There are a lot of things I still don’t talk about it. When you are in a war and on the front lines fighting against the enemy, what happens in between is about five seconds, and your life can be snuffed out.”