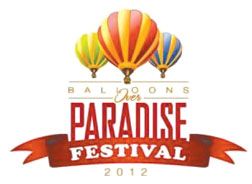 It is anticipated that over fifteen thousand festival enthusiasts will converge on the Immokalee Regional Airport April 13- 15th to see the hot air balloons participating in the first ever ‘Balloons Over Paradise Festival’. This event is sponsored by the Seminole Casino Immokalee.

The festival will feature 30-40 hot air balloons in addition to a full schedule of music, art, and family fun. Guests will enjoy the sights, sounds and grandeur of these remarkable balloons. The event promises to arouse all of the senses from the sheer “ooos and ahhs” of seeing the majestic hot air balloons in their full vibrant display of color.

Imagine balloons lifting from an air field at dawn amid an amazing crescendo of sounds from a string and percussion orchestra. The day will be filled with family friendly activities from regional artisans displaying their works, to music and storytelling. Everyone will enjoy watching dogs run a course through agility dog trials, and jumping disc dog displays. The pilots and crew will be accessible throughout the festival for children (or the young at heart) to discover the fantasy of flight.

Dawn patrol will kick off the event with a balloon glow lighting to a classical musical score, followed by a mass ascension of more than thirty balloons. The afternoon will feature demonstrations by agility dogs, a local artisan village, a children’s village and musical education tent. The day will also feature the Harvest festival parade and the crowning of the Harvest Queen. An afternoon performance by celebrated recording artist John Anderson, JJ MC Coy and Nouveaux Honkies will end with a balloon glow at sundown.

Dawn patrol will again kick off the day with a balloon glow lighting to a classical musical score, followed by a mass ascension of more than thirty balloons. Musical entertainment will play throughout the day as Gene Ferrari sings hits from the American standards song book and award winning singer Kathy Kosins caps off the festivities. The afternoon will feature demonstrations by agility dogs, a local artisan village, a children’s village and musical education tent.