The Little Bar’s boards have been removed and three more tap beer choices have been added! PHOTOS BY Natalie Strom

It’s that time of year again. The hurricane boards spray painted with “See you in October” have been removed and Goodland is back in business. The Little Bar’s answering machine no longer vaguely states, “we will be closed until we reopen” and the dance floors at Stan’s and The Old Marco Lodge are polished and ready. Not to mention that the Interpretive Center at MarGood Park is also now open to the public.

A soft opening was held on October 2, at MarGood’s main building which now features historic artifacts relating to Goodland and a small gift shop. The Interpretive Center will tentatively be open Tuesdays through Saturdays. Nancy Olson of Collier County Parks and Recreation has been eagerly recreating the building that served as a museum, restaurant and movie theater in its past lives. “This is just the beginning,” explains Olson. “There’s a lot more artifacts to bring in that were donated to us by Elhanon and Sandy Combs.” The owners of MarGood RV Park sold the property to the county in 2006 to ensure that it would remain a park and never be transformed into – gasp – condos!

As far as Olson is concerned, “The sky’s the limit,” on what can be done with MarGood Park and the Interpretive Center. Art walks, community classes and live music were all mentioned when discussing ways to utilize the park which was revamped and then reopened last March.

As for good eats, Marker 8 has sustained us all summer. Buffalo fried chicken, steamed carrots and Bud Light was my main summer staple. I’m definitely looking forward to their always entertaining and delicious Sunday breakfasts in season. May I say mimosas!?!?

Wait…. what? I’m Natalie! And yes, it is sad, but true that after seven years I will no longer be gracing Little Bar’s customers with my ever attentive service as a waitress. 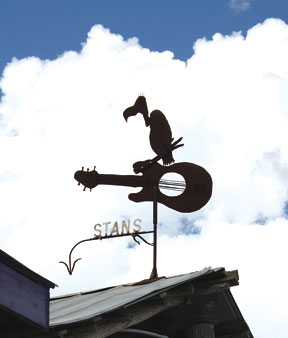 Stan’s will be open on Saturdays and Sundays through October and will be openevery day except Monday come November.

Well, maybe one or two nights when season rolls around… (how could I leave my family?) But until then, I will be focusing on continuing to make your day with my ever witty and humorous comments about Goodland life. And I’m sure you’ll find me in the Little Bar a whole lot consuming inspiration at the bar.

I will also be found consuming inspiration in the form of Buzzard Punches with the Gober family down at Stan’s. It’s truly a family affair this season. As of Saturday, October 6, you’ll see all three of Stan’s sons, Jay, Russ and Steve. “All my boys will be there too,” adds Steve. Ryan, Dylan, Michael and Zack will be hard at work on the grill, at the bar and serving tables. Queen Mary is rumored to be making an appearance and Jeff Hilt and the Stampede Band and Trippple Shot will be playing that first Sunday. The following Sunday offers NEW live music, featuring Fakahatchee, a country band out of Naples. “We’re going to continue to do what we’ve always done,” explains Steve. He will even be stepping into his dad’s shoes, getting up on stage to greet all of their guests as Stan always had. Steve laughs, saying, “I won’t be doing dad’s jokes though!”

Not to be outdone, The Old Marco Lodge will be hosting its reopening party on October 14. Get ready for a big surprise when you head on back to the Riff Raff Bar. A U-shape bar that seats 25 now awaits thirsty customers who love live music with a beautiful water view. For those who don’t enjoy those things, don’t annoy Goodland with your bad attitude. Stay at home.

But for all of you fun-lovers out there, Goodland awaits and is happy to be back in business.

Natalie Strom has lived in Goodland for over two years and has worked in Goodland on and off for more than five years. She is a graduate of the University of Iowa and is also a former Buzzard Queen of Stan’s Idle Hour in Goodland.