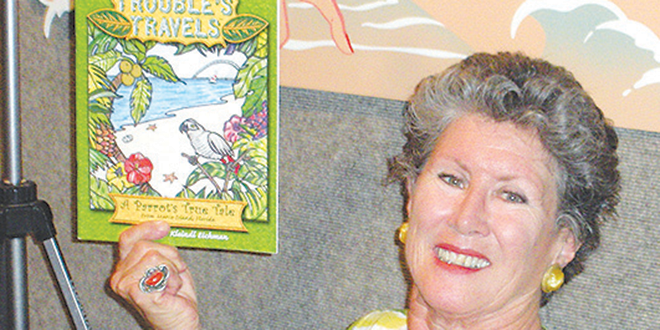 Kathleen Eichman and her coloring book entitled “Trouble’s Travels,” based on the escapades of “Trouble,” the African Gray Parrot perched over her shoulder.

Sue Strachman’s Marco Island vacation included a discovery that warmed the bibliophile’s heart. The find that brought a smile to her face was the third annual Marco Island Writers Authorfest 2015, held recently at the Marco Island Center for the Arts. Authorfest featured 36 local authors promoting and selling their books, as well as readings and discussions by 16 of the authors. Strachman was part of a well-attended gathering, highlighted by spirited conversation as attendees rambled from one display laden author table to the next, sipping wine and snacking on cheese. A resident of Silver Spring, Md., in Washington, D.C. suburbs, she came to Authorfest after seeing it advertised in a local newspaper. Strachman came away with two purchases: Pamela Fisher’s picture book, “Pammy the Pig” for a granddaughter and the young-adult novel, “Wake Up Calls,” by Connie Gaertner. “It’s fun to talk to the people here,” said Strachman. “It’s fun to talk to the authors. I’ve really enjoyed it.” Aside from youth-oriented fare, a wide range of other literary varieties were represented at Authorfest, including mysteries, romance, memoirs, women’s fiction and cook
books. Donald Sunshine of Marco was one of the authors who read a 10-minute excerpt from their book and then fielded questions from their reading-room audience. A Writers Club member for three years, he read a chapter from his “Life’s Moments: From the Hawaiian Islands to 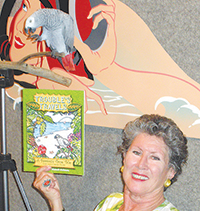 Kathleen Eichman and her coloring book entitled “Trouble’s Travels,” based on the escapades of “Trouble,” the African Gray Parrot perched over her shoulder.

the Appalachian Mountains.” He described the book as being, “42 stories, some of them are about places, some are about people. My wife tells me the humorous ones are stories where I haven’t followed her advice and made a fool of myself.” Sunshine said the exposure Authorfest provides participating writers is beneficial, especially in his case because he’s also a painter. “The event, it’s a nice opportunity to meet the wonderful people that we have on Marco Island who appreciate all of the arts so much,” he added. Curiosity about what exactly an author fest is led Gary Elliott, a realtor with Keller Williams Realty on Marco, to stop in. “I’m quite impressed that there are so many authors in there and they’re all pitching their books and they’re all selling their books and I bought a book,” he said. Jan Kinne Conway, author of the book Elliott purchased, “The Finisher, A New Path for Your Second Half,” was a first-time Authorfest participant having joined the Marco
Island Writers earlier this year. She and her husband Jim, a fellow author, live in Petoskey, Mi., when not spending the winter on Marco. Conway said they have been selling the book, which stresses the importance of pursuing one’s passion, primarily at speaking engagements so Authorfest provided a rare marketing opportunity. “It’s amazing,” she added. “I think it’s a great opportunity for authors to sell their books.”