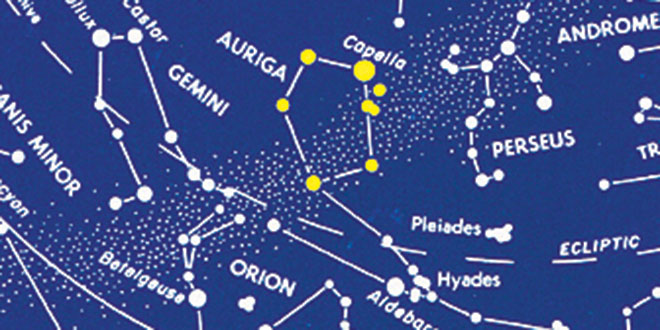 Looking High in the North, 9:00PM February 6. Can you see the kids? SUBMITTED PHOTO

Very high tonight in the northern sky rides Auriga the Charioteer. The driver usually also is visualized as a shepherd holding a goat over his shoulder. The bright star Capella is thus nicknamed “the goat star,” and the two dimmer stars just to the left are likewise named “the kids.”

Auriga is located 180 degrees away from the galactic center in Sagittarius, and so when you look at Auriga, you are looking at the shortest way out from our galaxy. The Milky Way, although thinner, is still substantial in this area, and there are numerous star clusters to interest even the most casual binocular user. Inside the rough ring of Auriga, there are at least six clusters visible to binoculars; two of them are bright Messier objects M36 and M38 with M37 just outside of the ring.

If you want a real challenge, you may be able to spot the Crab Nebula (M1) with 9×50 binoculars. Look for the tiniest wisp of faint fuzz you can imagine, and you have it. Among all of the objects on his list, Messier may never have spotted a stranger one. The Crab Nebula is a supernova ruminant — still in violent expansion 1,000 years after the explosion. The nebula, because of the expansion, has dimmed over the centuries, and if Messier was still alive today and using his old telescope, he would never have spotted it. Modern equipment, though, still gives stargazers a chance.

Also in view tonight is Gemini with the “twin stars” Castor and Pollux. If you have some trouble telling the two stars apart (as I do), then remember that Castor is the closer of the two stars to Capella. In ancient times, Castor was considered brighter than Pollux (although this is not certain), but now Castor seems to be somewhat dimmer than its twin. Also Castor hides a secret: It is not one star but six! Delicate instruments were required to discover this.