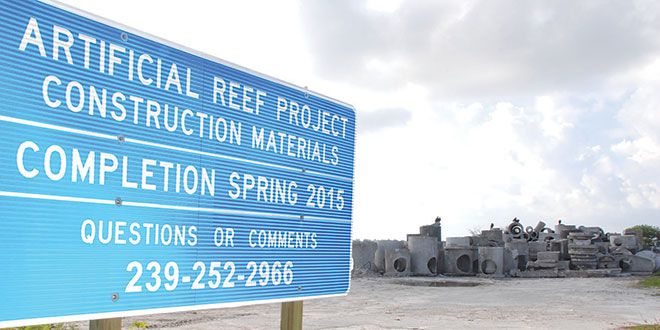 The material for the artificial reef is ready to go at the base of Jolley Bridge.SUBMITTED PHOTOS

The notoriously lengthy process of wading through government red-tape is now over. All of the permits are approved. In just 60 days, construction is set to begin on one of the world’s largest artificial reef projects. The six reefs — each the size of a football field — weigh in at around 500 tons each and are made up of six smaller pyramid-shaped reef modules. They will be deployed 12-30 miles off-shore from Marco Island, Naples and northern Collier County.

“I’m really excited about this project. It’s been a passion of mine, and I never thought it would be done in 14 months. That’s a testament for the people involved, to get this done so quickly. I’ve never worked with a more dedicated group of people,” said Peter Flood, Naples attorney and fisherman, during his recent presentation on the artificial reef project at Rose History Auditorium.

Flood said that in 2011 he assembled a task force and suggested they apply for government grants to help boost the local marine habitat. They had the grant money in-hand 18 days later, and have since been working hard to bring this project to fruition. Feeling support from Marco Island, Collier County, local fisherman and the community as a whole, Flood’s expectations are that the reef 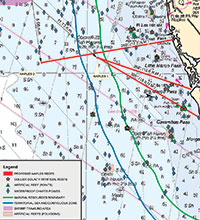 will be expanded upon and enjoyed by generations to come.

“It’s a designed reef. It was engineered to last,” said Flood.

In 2012, the retired World War II-era USS Mohawk was dropped 28 miles off-shore from Fort Myers Beach; a $4 million project that is only expected to last 85 years in the saltwater. With a price tag of $3.4 million and materials like recycled and donated concrete, limestone boulders, culvert pipes and sidewalk chunks, the projected lifespan of these reefs is around 750 to 850 years. Like the Mohawk, hopes are that this artificial reef also will attract marine life species that haven’t been around in years.

The project is expected to bring $30 million to the area’s economy by way of tourism, fishing and other related revenue and the team anticipates this reef will kick-start recreational diving right here at home.

Funding has been and continues to drive this project. The $1.3 million in grants from BP’s Gulf Tourism and Seafood Promotional Fund along with donations from the private sector have made this work possible. Donations to the non-profit organization of $100,000 by any person, family or business will allow them naming rights to any one of the six reefs. Donations of $2,500 will put a name plaque, visible to divers, on one of the smaller reefs.