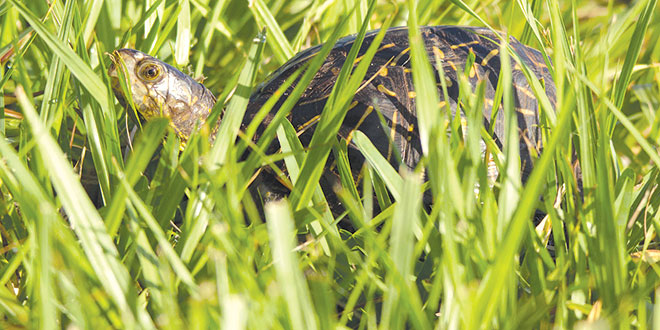 A not so well known turtle roams Marco Island. It’s not the glamorous Loggerhead Sea Turtle or the well-known Gopher Tortoise. It is very commonly seen in the beachfront dunes and near wetlands and pond areas of the island such as Barfield Bay, in Hideaway Beach conservation areas and along Spinnaker Drive.

The Florida Painted Box Turtle (Terrapene carolina bauri) is a small turtle that is not only a small wonder but a treasure for the island. Its striking array of a yellow pattern on its shell is art in nature; some have said the yellow patterns on the shells remind them of the lightning we commonly experience in southwest Florida. It is like a batik pattern.

The Florida Painted Box Turtle’s characteristic and original array of yellow lines on the carapace (upper shell) is one of a kind. And each turtle has a one-of-a-kind pattern. These turtles are not large; full grown they are 4-8 inches in length. Their shell, or plastron, is highly domed with a slight keel, differing than other “land” turtles on Marco Island, such as the Loggerhead sea turtle, Gopher tortoise, red-eared slider or mud turtle.

These interesting terrestrial turtles can live to 40-50 years of age. Uniquely, they have a hinged bottom shell (plastron) that closes tight for protection from the elements and predators. They eat mostly small insects and low-growing vegetation and are considered omnivores. They live in vegetative cover and need a fresh water source nearby so it is not surprising they find the beach dunes near Tigertail Beach lagoon and along the beach suitable habitat. If it is hot, they will dig in the soil and burrow in the mud to keep cool. Typically, their range is only about a 750 foot area.

Florida Painted Box Turtles will lay one to eight eggs between May through July in south Florida, burying them in just inches of soil near a water source. Once hatched, the tiny turtle hatchlings are easy prey to insects, lizards, snakes and birds. If a hatchling survives, statistically one of the eight hatched, they are slow growing and need cover and a water source to survive. It takes approximately four years to mature and produce young. The population on Marco Island is documented and scarce. They are slow to mature and produce but once established can live for many years.

It is legal to have a maximum of two with a license Florida box turtles as a pets. But please take note: it is not legal to take one from the wild. Collecting box turtles or any turtles, is not only illegal, but negatively affect their populations, as they are slow to mature and produce to sustain a natural healthy population. If interested in having a pet box turtle, please purchase from a licensed vendor. This type of pet will require decades of dedication and knowledge of what they eat and habitat to ensure a healthy life.

If out walking on the beach or in the Spinnaker Drive area, don’t be surprised to see a Florida Painted Box Turtle strolling by. Let it go on its way as you note its original pattern of yellow arrays on its shell. It is an example of art in nature, something the Marco Island beach and environment known for historically as documented by the Calusa Indians.