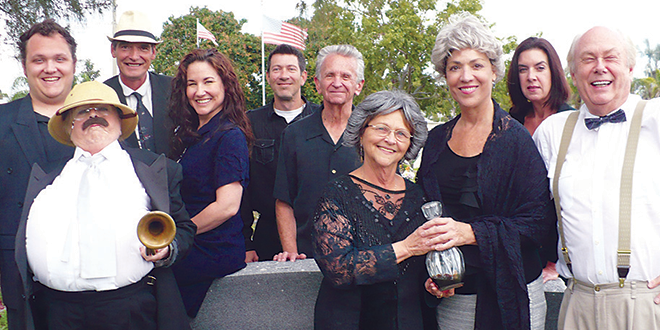 The Box Office is open and tickets are currently on sale for the Island Theater Company’s upcoming spring production of Arsenic & Old Lace sponsored by Clausen Properties. The classic Arsenic & Old Lace is by American Playwright Joseph Kesselring. The production will run from April 9th through April 18th. This famous comedy was a smash hit in New York and on the road and is one of the most popular classic plays of all time. The year is 1941. The location is a small house next to a cemetery in Brooklyn. In the house lives two kind, thoughtful, sweet old ladies, Martha and Abby Brewster who have developed a very bad habit. It appears that they murder lonely old men who have some sort of religious affiliation and they consider doing it an act of charity. Their bugle blowing nephew Teddy (as in Roosevelt) takes them to the Panama Canal (the cellar) and buries them. Their nephew, Mortimer Brewster, a drama critic, returns home one evening only to find a dead man in the window seat. Another nephew, Jonathan, r

eturns to the home after years of fleeing the authorities due to his “unofficial practice” of killing people and using their faces to change his. However the results cause him to look like Boris Karloff due to the poor craftsmanship of his German accented, alcoholic sidekick Dr. Einstein. As the story continues, we see each character trying to find resolve in their suddenly flipped upside-down lives. Mortimer tries to keep his aunts safe and prevent them from continuing their nasty habit while trying to stay sane with the woman he loves. The aunts busy themselves trying to continue their “charities”, while Jonathon works to establish a wealthy practice that is stationed inside the home.

The cast of Arsenic & Old Lace includes many island favorites along with some new faces to the theater.

• Judy Daye, (theater veteran) plays Abby Brewster. A darling lady in her sixties who poisons Elderly men. Abby is the sister of Martha and an aunt to Teddy, Jonathan, and Mortimer. 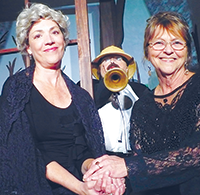 with her sister Abby. She is an aunt to Teddy, Jonathan, and Mortimer.

• A. Megna (new to ITC) plays Teddy Brewster. The nephew of Abby and Martha, Teddy is a man in his forties who thinks he is Theodore Roosevelt.

• Jared Wagner (ITC veteran) plays Mortimer Brewster. Nephew of Abby and Martha. A drama critic who is engaged to Elaine and a nice man who cares for his aunts.
• Karen Anglin (ITC veteran) plays Elaine Harper. Mortimer’s fiancée and the daughter of Rev.Dr. Harper. She is surprisingly wise in the ways of the world for a minister’s daughter.

• Cathy Clausen-Neff (an ITC veteran) plays Officer Klein • Bill Filbin (a newbie to the theater) plays Mr. Gibbs. Gibbs is a man who wishes to rent a room from the Brewster sisters.

• John Moulton (an ITC veteran) plays Jonathan Brewster. Nephew of Abby and Martha. Jonathan is a psychopath who has had plastic surgery and now looks like Boris Karloff.

• Richard Joyce (a theater veteran) plays Officer O’Hara. A police officer is a would-be playwright who pesters Mortimer to read his play.

Arsenic & Old Lace opens April 9th and runs weekends through April 18th at the Rose History Auditorium, 180 S. Heathwood. Tickets are $20 and can be purchased in person at the Marco Island Historical Society Gift Shop or at Centennial Bank, 615 E. Elkcam Cr. They can also be purchased online at www. theateronmarco.com, by calling the ticket office at 239-394-0080, or at the door 30 minutes prior to each performance. Opening Night tickets include the “Meet the Cast” Opening Night party following the performance. Evening performances begin at 7:30 pm. There is one Sunday matinee performance on April 18th at 2:30 pm. Doors open a half-hour prior to performances. Group discounts are available! To reserve seats for a group of 10 or more, please call the Box Office at 239-394-0080 to make your reservations and receive 10% off on your order. Student groups receive additional discounts.