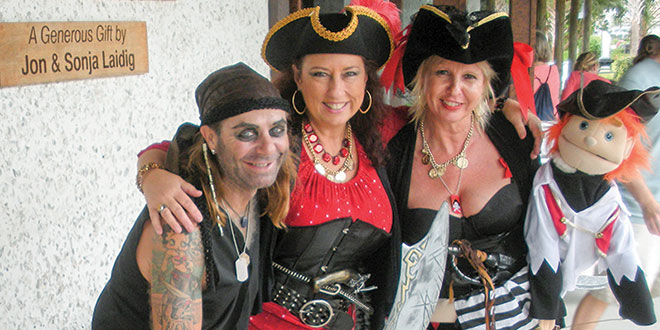 Rain and wind outside did nothing to dampen spirits of the children and adults cavorting inside the Marco Island Historical Museum on a recent Saturday.

The dank conditions also failed to significantly hold down attendance at the museum’s Third Annual Pirate Day festival, held from 10 AM-2 PM, Jan. 24.

Pirate-themed crafts, face painting, pirate games and treasure hunts are the attractions at the family-themed event, where youths came decked out in their buccaneer best to solve puzzles, capture “treasure” and enjoy food, drink and all the museum has to offer.

“It’s been a lot of fun, even though the weather’s been high-seas-type weather,” said Tim England, who was in his final day as the 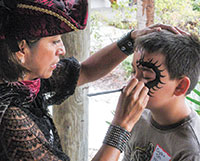 facility’s manager. “We’ve had a lot of people come through, a ton of people. I think the last count was over 300 people already (at about 11 AM). So it’s been great.”

Children partook of a variety of interactive games overseen by pirate-garbed volunteers, such as sifting through a bucket of sand seeking out gems and sharks teeth, lessons in tying deep sea knots, pirate-theme puzzles and Captain Blood’s Treasure Chest, where they picked three keys from 10 choices, with the right key unlocking a chest filled with jewels, sharks teeth, minerals and jewels.

But Captain Blood’s Treasure Chest also presented the children with an alternative. “If they take the Captain’s Choice, they win a gold 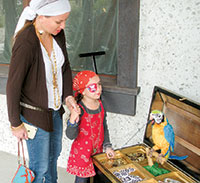 Amia Curry and her daughter Marcelina, 6, check out some pirates treasure as they arrive at Pirate Day. PHOTOS BY DON MANLEY

doubloon,” said England. “They can choose only one.”

Amia Curry of Marco and her daughter, Marcelina, were enjoying Pirate Day for the first time, and they plan to make it a regular part of their family fun. “It’s great,” said Amia Curry. “There are a lot kids. They’re all having a really good time. There are lots of different stations and lots of different things to do — really nice.”

Pirate Day is normally a largely outdoor event, but the inclement conditions forced many activities to be moved inside, a shift that did offer some positives, said England, who now manages the Immokalee Pioneer Museum at Roberts Ranch, which, like Marco, is part of the Collier 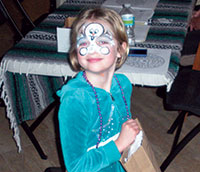 “It’s kind of good because it’s getting them (the youths) into the museum, as well,” he said. “They’re having some fun, but they’re also seeing their museum and that’s what it’s all about. Collier County Museums is about the people here. It’s their history and we are the caretakers of their history.”

Peter and Erika Vickerman of Minnesota came last year for the first time, along with their daughters Summer, 6, and River, 4.

“We made sure we could get back here for this,” said Peter Vickerman. “There are just a lot of great activities for the kids, and it’s fun to walk through the museum and learn a lot more about the different people that were before us.”