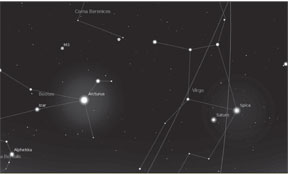 Extend the curve of the Big Dipper’s handle eastward and you will reach the bright star Arcturus. (You can always find it easily by remembering the mnemonic arc to Arcturus). The star itself is hard to miss; it’s the fourth brightest in the whole sky and the brightest star in the northern hemisphere – although Arcturus is close enough to the celestial equator to be easily visible over nearly the entire Earth. For the Hawaiian Islands this star appears directly overhead on Summer evenings; ancient Polynesians could use this information to navigate to the southeastern shore of the Big Island. Arcturus is an orange giant star and it’s thought the Sun will look much like Arcturus in its old age.

Extend the curve of the Big Dipper’s handle past Arcturus and speed to Spica, the brightest star in the constellation Virgo. Rather dimmer than Arcturus, blue giant Spica is still the fifteenth brightest in the sky. The name Spica means “ear of grain”. Spica is only two degrees from the ecliptic – close enough that the Moon occasionally passes in front of it. This type of event is known as an occultation; important information about both the Moon and the star can be uncovered by careful studies of occultations.

The mythology of Virgo is a little confused, although nowadays the constellation is called “the Virgin”, since Babylonian times it has also been associated with fertility and the harvest. Possibly because in 2000 BC Virgo rose just before the Sun at harvest time and was a signal to reap the wheat. Alas, it is no longer the sign it once was; due to a phenomenon called precession of the equinoxes the Sun now is actually inside the constellation when it rises at harvest time and Virgo is invisible.

Virgo is the second largest constellation in the sky after Hydra. It takes the Sun about a month and a half to pass through it in the fall; Saturn was in Virgo last April and it will still be passing through it next April.

Saturn is now close to opposition and is about as bright as it ever gets. It is brighter than it has been over the last couple of years as it’s famous ring system is now tilting towards Earth and the icy rings are highly reflective. Even though the rings are now favorably placed they unfortunately remain beyond the reach of binoculars. About 30 power is required to bring the ring system into view; at the 7 to 9 power of standard binoculars the best you can do is try and convince yourself, as Galileo did, that Saturn looks rather odd.

Mr. Usher is President of the Everglades Astronomical Society which meets every second Tuesday at 7:00PM at the Norris Center, Cambier Park, Naples.