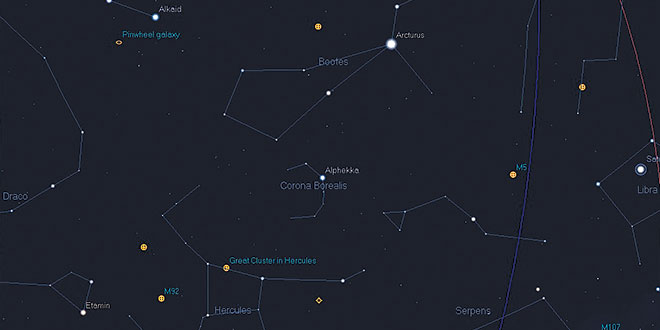 Very high in the east lies Arcturus, an orange giant star that is the brightest star in the sky this evening. Arcturus is also the brightest star in the Sun’s general neighborhood; it is about 170 times more luminous than our home star. If you are having a bit of trouble finding it remember the phrase “arc to Arcturus,” which means follow the arc of the Big Dipper’s handle until you reach the bright orange Arcturus.

Arcturus is the brightest star in the constellation of Boötes, the herdsman. In ancient times, the star was a couple of degrees closer to the center of the constellation. This is because Arcturus has what is called a large proper motion; it’s slowly moving southwards and a little east – but not fast enough to be noticed in a single lifetime.

Tonight there are a number of interesting globular clusters within range of your binoculars and one, the Great Cluster in Hercules, is just within the possibility of naked eye viewing. If you see it with the naked eye or binoculars you might compare it with the even larger Omega Centauri mentioned in a previous column. Although smaller than Omega Centauri the Great Cluster has the advantage of rising much higher in our sky thus giving the better view. There are about 300,000 stars in the Great Cluster, but it takes a large telescope to see individual ones. Through binoculars it looks like a perfectly spherical ball of fog, fading towards the edges.

The fairly nearby M3 is probably too dim to make out with the naked eye, but is easy to see with binoculars if you take care to locate the object carefully. It’s actually larger and brighter than the Great Cluster – but being farther away from us it winds up dimmer. While you have your binoculars in hand check out M5 in the nearby constellation of Serpens. Also a large globular cluster, it may have as many as 500,000 stars in it, but most estimates are smaller, perhaps “only” 100,000 stars. Like the other two clusters mentioned, only fairly large amateur telescopes can make out individual stars.

It’s important to draw a distinction between globular clusters and open clusters (also called galactic clusters). A typical globular cluster is roughly spherical, contains many tens or hundreds of thousands of stars and is maybe eight billion years old. They also are well scattered across the sky. Open clusters, on the other hand, contain tens to hundreds of stars, are irregularly shaped and usually only a few million years old. Open clusters tend to be found predominately within the band of the Milky Way.