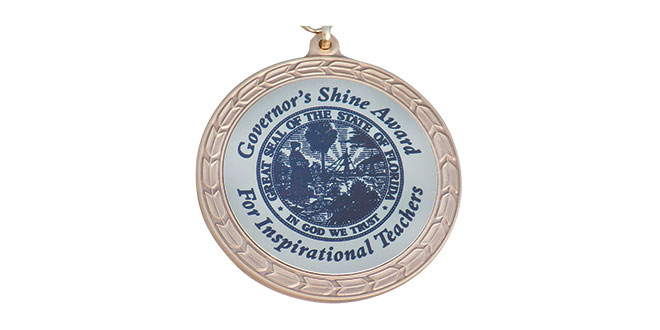 Governor Rick Scott’s Shine Award recognizes outstanding and inspirational contributions made by Florida educators.Rients and three of his colleagues receivedthis prestigious award from the Governor during his visit to MIA on March 4th

On March 4, 2016, Governor Rick Scott came to town and didn’t stop until reaching the campus of Marco Island Academy (MIA). One of the reasons he came was to see for himself how this small high school (opened in 2011) could have risen so rapidly in the state’s academic rankings. (The Florida Dept. of Education has ranked MIA as an “A” school for the past two years. Since then, the Washington Post has rated MIA as one of the 255 most challenging high schools in the nation.)

Another reason the Governor came was to personally present his coveted Shine Award to some of the outstanding teachers who were instrumental in MIA’s success. The Governor’s Shine Award recognizes educators and administrators in Florida who make significant contributions to the field of education. As the Governor puts it, it is his “way of showing his appreciation for Florida’s exceptional teachers and for their commitment to improving Florida’s education system.” Four of MIA’s educators received this award during Scott’s visit. Two of them, Principal Melissa Scott and language arts teacher, Kirby Rients, have already been featured in Coastal Breeze News. This edition will highlight the contributions of Spanish teacher, Mariah Walther.

Walther, the middle child of four siblings, grew up in Montgomeryville, Pennsylvania, (pop. 12,600) a suburban Philadelphia community near the Bucks County border. After high school, she matriculated at West Chester University, the preeminent teachers’ college in the area (My parents went there also), graduating in 2011 with a BA in Spanish and accreditation as a K-12 teacher. Majoring in history with a Spanish minor, Walther didn’t fully commit to Spanish until the middle of her junior year. “I always enjoyed my Spanish classes in high school,” she said, “Spanish is such a beautiful language and is all around us.” What cinched it for Walther was a university sponsored International Study Abroad at Universidad Salamanca during the summer of 2010. Old City Salamanca has been designated a World Heritage 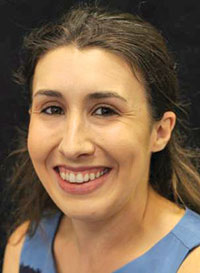 Site. The university, founded in 1134, is Spain’s oldest and supplies 16% of Spain’s market for the teaching of the Spanish language. “I just fell in love with the language and the culture behind it [when I was studying in Spain],” Walther told me, “[Spanish] is so commonly spoken in our country, especially in Florida. I want my students to understand what a great advantage they will have in all aspects of life by being bilingual.”

In June, 2015, U.S. News published a startling eye opener of an article. The lead read: US now has more Spanish speakers than Spain – only Mexico has more. The report went on to note, “There are 41 million native Spanish speakers in the US plus a further 11.6 million who are bilingual, mainly the children of Spanish-speaking immigrants. This puts the US ahead of Colombia (48 million) and Spain (46 million) and second only to Mexico (121 million).” As of July 2015, the US Census Bureau estimated that those of Hispanic origin constituted 17.4% of our total population – roughly one out of every five persons. What difference does this make and who are these people anyway? Well, two of them, Senators Marco Rubio and Ted Cruz, came near to being nominated for president of the U.S. this year. Closer to home, MIA’s 2016 Graduate of Distinction (Duneshka Cruz) and last year’s Valedictorian (Fermin Mendoza) are also proudly in this demographic.

After graduation from West Chester, Señora Walther, as she is addressed by her students, began a succession of teaching assignments in the Philadelphia area, interrupted by the premature birth of her second son, in 2013. Taking a hiatus from teaching “to focus on my family,” Walther resumed teaching in January 2014. In June 2015, hankering for some southern Florida sunny weather, Walther attended a Collier County School District “jobs fair” where she was interviewed by the MIA staff. It was an easy sell for both parties. Walther was hired shortly thereafter and moved to Bonita Springs 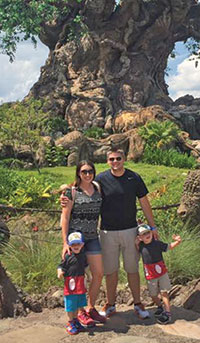 Submitted PhotoMariah and Frank Walther at Disney World with sons Connor, 3 (left) and Shea, 4(May 2016).

the same month. Since August 2015 she has taught Spanish I-III, grades 9-12. “I often tell [Principal, Melissa Scott] that being offered this position was one of the best things to ever happen to me,” Walther said, “The students here are simply amazing and so talented, both academically and beyond. They inspire me each day to become a better educator.”

I recently attended one of Señora Walther’s Spanish II classes. I walked into a room where students were attempting (with fair success) to communicate with the señora in Spanish. Walther was right out there, in the midst of the kids, keeping things lively and bright, focusing on whatever student that happened to be in her crosshairs. It took a lot of concentration on the students’ part to come up with the right Spanish words. The previous day they had watched a five-minute film about a vampire that went to a dentist because he had a toothache. This day they were working in small groups to change the ending for the unfortunate vampire – all in Spanish (except for the señora’s timely corrections). I easily recall spending a lot of time in high school French class watching the clock, planning the weekend and praying I wouldn’t get called on. As far as I could see, there was none of that here. “I don’t use a traditional textbook,” Walther says, “I use a teaching method, TPRS (Go ahead – Google it), which focuses on using the most common vocabulary and grammatical structures in the language. Students act out skits, tell stories and write their own stories all in the target language. I try to limit the amount of English used in class, only when it is absolutely necessary for comprehension to occur.” According to Principal Melissa Scott, this approach must be working. “Mariah [in only her first year] has completely transformed and revitalized our foreign language program and department.” Scott says, “She is engaging, personable, and completely dedicated to her 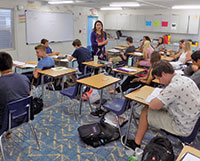 Señora Walther converses with students in Spanish as they make up a different ending to a story she has presented. Photo by Barry Gwinn

students.” The students seem to agree.

Bryan Flynn is a senior at MIA. He took Spanish I and II this year. His comments are illuminating. He said he learned way more Spanish than he expected and as a result he may continue Spanish in college. His thoughtful critique of Señora Walther is one any teacher would be proud of:

“Señora doesn’t take really a traditional route of presenting us with Spanish words, defining them, then taking a quiz on them. Her class is very interactive and makes Spanish fun. Most of this year in her class we told stories in Spanish. Through these stories she would present the different concepts of Spanish I and II and, nearing the end of the year, Spanish III. We get to make up the stories as we go, with Señora Walther’s approval of course. I believe that with the students making up parts of the story, it gets them involved.

Señora Walther relates to the class very well. She knows that every student needs to be approached differently whether in teaching or just general conversation. She doesn’t have trouble with holding people’s attention during story time because it’s fun and people like listening and participating in the humorous stories. During classwork activities like learning new words and tenses, she uses a green ball to toss around the room from person to person. Everyone pays attention so they don’t get hit with the ball. Also together as a class we use body signals to demonstrate Spanish verbs.On a scale from 1-10, as a teacher, I would rate her an 11.”

Chelsea Perez, a sophomore taking Spanish I, adds a different perspective. “Mrs. Walther uses stories and world experiences to help us understand the language,” says Perez, “she engages with her students through adding humor to the stories we create, but also helping us understand situations that we would find ourselves in on a daily basis.”

Year by year, teacher by teacher, and student by student, MIA is building an enviable legacy on our island.