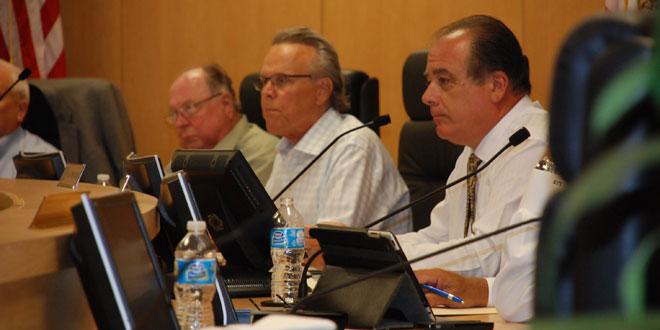 Marco Island city councilors listen to both sides of the Marriott project debate during the June 2 meeting.

The Marco Island Marriott Beach Resort’s $150 million renovation plan cleared its first hurdle Monday (June 2) night when City Council approved the amendment to the hotel’s planned unit development and master plan by a vote of 4-2. Councilors Amadeo Petricca and Chuck Kiester voted against the measure, and Councilor Joe Batte was not in attendance.

The approval came after nearly six hours of presentations, impassioned community responses, in-depth discussion and a surprise promise from Marriott General Manager Rick Medwedeff. The hotel’s ownership group will kick in $1 million to expedite the renovation of the Smokehouse Bay Bridge. The extra money takes the 18-month bridge project down to 10 months, eliminating any potential overlap between the bridge work and construction at the Marriott while also eliminating the potential need for Marriott construction traffic to use San Marco Road (U.S. 92).

“We were asked to look for yet another benefit to Marco Island, and we took that to heart,” Medwedeff told city councilors. “This would be a significant enhancement to island residents…It would benefit the tax payer because we would fund the $1 million to make that happen.”

At the heart of the discourse were four elements: two PUD amendment requests and two land development code modifications to allow the Marriott to reconfigure their current meeting space, add an additional 26,000 square feet and add a new 84-room guest tower. First, Marriott officials requested an 11-foot variance on the current height limit in its PUD, which would allow the proposed guest tower to reach 111 feet — the exact same height as its current two guest towers. Second, Marriott asked to build a structure on the east side of Collier Boulevard to house its HVAC systems. It would be located north of existing cooling tower.

The land development code modifications sought by the Marriott included adjusting a 10-foot landscape buffer to a 5-foot buffer on the parking lot north of the valet entrance and reducing the number of landscaped islands on the interior of the parking lot.
Marriott officials want

The voices that have spoken the loudest against the Marriott

proposal — Bob Olson, Bill Harris, Karina Paape and Dr. Bill Trotter — stood firm, demanding the Marriott be held to the stipulations established in its 2001 PUD. “Gentlemen, I have been forced to live and breathe this issue at a gut level,” Olson said from the podium. “My arguments maybe tainted with emotion, but this is about land use…We need to get this right and get it right right now. I really live this issue. I live right next door.”

“This is not about 84 rooms,” Trotter explained. “It is about intensity and potential intensity…It is about the potential impact on the island.” He urged City Council to slow down and consider how all aspects of the project will change the community.

Supporters of the project focused on the Mackle brothers’ original vision for Marco Island. Local businessman Bill McMullan — who was a friend of the Mackles — read from Deltona Corp.’s 1964 annual report, which depicted Marco Island not as a haven for retirees but as a bastion of “resort leisure living” where “growth will be derived from tourist activities.”

Long-time Marco Island Realtor Jim Prange echoed McMullan: “I would like to remind everybody that the Mackle brothers designed Marco Island to be a year-round community with schools, parks and churches. It is a real shame that the young families of Marco Island are never represented at these meetings. They are too busy trying to survive — many working two jobs, attending and coaching athletic events and raising their children. Many do not have the time or the money to get involved or fill out surveys from the civic association. As a result, you are getting a one-sided answer.”

Representing the Marco Island Chamber of Commerce and the Marco Island Area Association of Realtors, Dick Shanahan reiterated that “any community in this country would welcome the Marriott proposal…There is no perceptible downside to this proposal.”

When the conversation turned to the men behind the dais, Councilor Larry Honig summed up the general consensus of City Council: “This project is reasonable. It is not an overreach, and it won’t

worsen the character of the island…This is not a massive construction project on this island.”

Still, there was work to be done, and City Council spent the better part of two hours going over the 17 conditions in the ordinance imposed on the project by the Planning Advisory Board. They hashed out concerns over the 1243 parking spaces, traffic, landscaping and pest control. Councilor Petricca asked a number of times who would be responsible for policing these conditions and how it would be done. Councilors agreed that noncompliance with any of the conditions will result in a fine of $250 for the first violation and $500 per day per violation for repeat violations.

New conditions were discussed as well. Some councilors suggested adding language that would prevent any further changes to the PUD, and City Attorney Burt Saunders is looking into this. Councilor Petricca expressed concerns over out-dated language throughout the PUD ordinance, and he, Saunders and City Manager Roger Hernstadt will be meeting to go over these issues.

“The whole point of expediting the bridge construction will really cause problems on Collier Boulevard, but to reduce the time involved to 10 months is mutually beneficial to the Marriott and the city,” said Councilor Kiester.

Councilors agreed that city staff needed to meet with the bridge contractor — Quality Enterprises USA — to discuss the proposed timeline, $1 million contribution and alterations to its $7.625 million contract for the bridge.

With the first public reading and hearing completed and the clock approaching 11 PM, Council Chairman Ken Honecker set the second public hearing and reading of the PUD amendment for June 16, and Councilor Honig summed up the evening: “I think we’ve made tremendous progress tonight.”