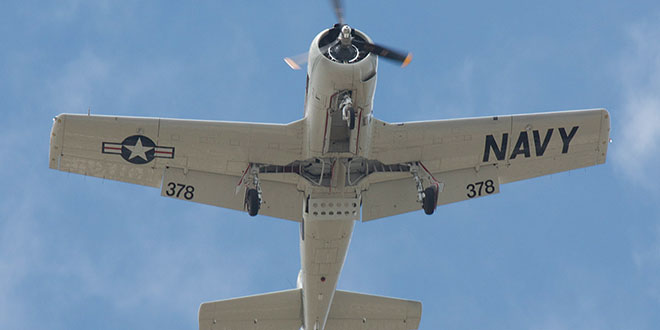 Our local VFW will honor those who lost their lives while serving our country in the Armed Forces on Monday, May 26, at 11 AM, at Veterans Memorial Park. The public is welcome to attend.

Lee Henderson, commander of the VFW Post #6370 and commander of the Marco Island Civil Air Patrol, will start the ceremony by making the announcement to present the colors. The Color Guard will be Jim Lang, Richard Walker and Dave Gardner. This year’s opening prayer will be said by Rev. Thomas McCulley of New Life Community Church, and the National Anthem will be sung by Craig Gruesel. Members of the VFW post, the Civil Air Patrol, Coast Guard, City Police and Fire Rescue Department, Boy Scouts and Girl Scouts, Cub Scouts and Brownies will be in attendance. Lt. Colonel Robert Berlam will do the Marco CAP fly over. Also recognized will be the individual branches of the military.

Mike and Janet Stapleton will recite a soliloquy, and John Dollinger, commander of the District 13 Florida American Legion, is the featured speaker. Herb Savage will sing “God Bless America,” and the Strummers will provide the music. Rabbi Maline will say the closing prayer.

Just in time for the event, the Veterans’ Memorial Flag Plaza should be complete, says Lee Rubenstein, commander of the new Marco Island American Legion Post 404. The plaza will feature five flags representing each U.S. military branch — Army, Navy, Marines, Air Force and Coast Guard — and a commemorative brick-paver walkway leading to the 80-foot, paved circle which is highlighted by a star, medallions and commemorative benches.

2007, the Veterans’ Memorial Fundraising Committee raised $350,000 of the memorial’s more than $470,000 total cost, and the city of Marco Island contributed $60,000 to the project, which will also include the beautiful 26-foot wide, 10-foot tall Freedom Fountain. A 10-foot tall bronze, in-flight American eagle tops the fountain. An artist rendering of the Freedom Fountain is on permanent display at both City Hall and Mackle Park.

While the committee has relied upon private donations to acquire funds, along with the sale of commemorative brick pavers, bench plaques, service-branch medallions and flag pole memorials, it was a generous donation from World War II veteran Robert and Thelma Sargeant of Marco Island that made the Flag Plaza’s completion possible for Memorial Day. Funding for the eagle was donated by Marco residents Mike and Jill Havey. Susan La Grotta of the Marco Island Beautification Committee and Al Benarroch of Affordable Landscaping are working together on landscaping, and Bonita Springs-based Precast By Design donated the labor and precast materials for a stone-like finish to the concrete blocks on the planter bench.

Funds are still being raised for the fountain’s construction, and lines of inscription are available on the granite panels on the fountain. Rubenstein says the committee hopes to conclude fundraising by year’s end. For donations to the fountain or to purchase pavers, visit www.cityofmarcoisland.com/index.aspx?page=367.

Lee Henderson, commander, and Dave Gardner, past commander of VFW Post #6370, emptied the flag receptacle located at Veterans Community Park recently. The box was completely filled. A second box for flag disposal box is located across the parking lot at City Hall. Each box is emptied frequently.

On one such occasion last year, Dave took out a total of 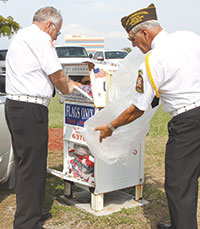 89 flags. The flags ranged in size from small stick flags to 8’ X 12’. Flag etiquette requires flags be disposed of in a dignified manner once they are worn, frayed or torn. This disposal service is provided free through our local VFW.

A replacement flag can be purchased through the Marco Island VFW. Dave explains, “The flags are 100 percent American-made (as in Kansas City). These flags are the highest quality, and our prices are about 60 percent of the same flag at a box store and about 40 percent of the price from a company such as Annin in New Jersey. Still, we only sell one for every 10 we dispose of? And, we deliver them to your doorstep FREE of charge. You can also purchase a flag at Radio Shack on Collier Boulevard. One-hundred percent of the price paid will go to the VFW.”

So, what does the VFW do with the proceeds from the flags? Dave says, “There are thousands of veterans in our country who can no longer care for themselves and have no one else to help them. The Veteran’s Administration, along with money sent from our and other VFW Posts’ “service fund,” give these people a place to live in comfort, dignity and the companionship of their comrades for the rest or their lives. Our “poppy sale” collections also go into this protected fund. No money from our flag sales and poppy sale go to the Post funds.”