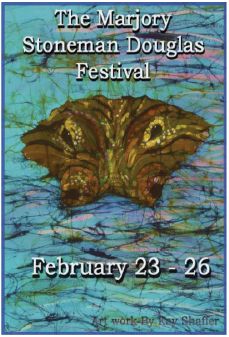 The Annual Marjory Stoneman Douglas Festival will hold its opening presentation in Everglades City on Tuesday, February 23. Dr. Laura Ogden will address Everglades Culture and History with a luncheon and fashion show following.

Marjorie Stoneman Douglas is a name as familiar to Floridians as the Everglades. In her 108-year lifetime, she was a relentless advocate of preserving the natural beauty of the Everglades. She realized, before many others, the delicate ecosystem existing in the land and water of South Florida and passionately fought to protect it.

Douglas was born in Minnesota in 1890 but moved to Florida in 1915 after the end of her marriage, to begin writing for the Miami Herald. She lived in a small, modest cottage in Coconut Grove in Miami for more than 70 years, with no driveway and no stove until her death in 1998.

Douglas’ 1947 book The Everglades: River of Grass still sells approximately 10,000 copies per year although many may not know that is how the area became known.

Following the opening event, the program for the rest of the week includes walks, talks, films, a photo workshop with Rick Cruz, and Otter John with his wild animal show. For a schedule, stop by the Museum in
Everglades City, see www.evergladesmuseum.org, or phone 695-0008. Reservations are required for some of the activities .