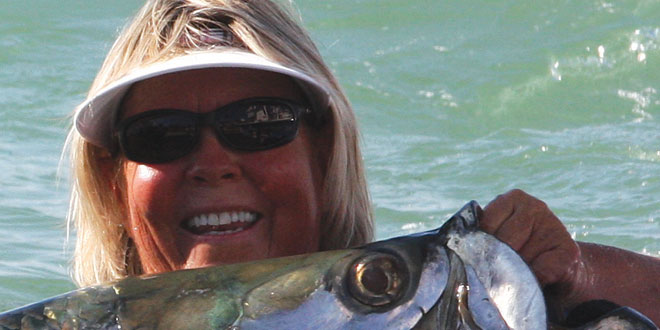 I so enjoyed the recent conversation I shared with Everglades Fishing Guide, Becky Campbell. She revealed little pearls of wisdom describing her vast experience “hunting” for fish. Becky speaks of fishing with a gleeful glimmer in her eye and prefers to refer to her experiences as “catching” rather than simply “fishing.” I thought it most appropriate to share my conversation with Captain Becky with other angling enthusiasts because expert tips like these are few and far between.

Becky grew up in Clearwater, where she describes the water as being a beautiful crystal clear green. Due to the amazing water clarity, she learned to sight fish as a youth and could eventually begin to identify specific types of fish by watching the way they swam away as the boat neared them. Becky explained that each fish has its own unique “wiggle” or ”kick” when moving from a boat as it nears.

When asked how she got “hooked” on fishing, Becky tells a story of being on a boat with her Mother, Jane, at age four, when Jane asked Becky to hold the rod for a moment while she took off her coat. The instant Becky took hold of the rod, a tarpon hit and started its characteristic acrobatic jumps and aggressive runs. At that moment, Becky was hooked, both literally and figuratively.

Among Becky’s many youthful memories involving fishing and life on the water, Becky fondly remembers shelling, exploring, fish gigging, diving, spear fishing, bill fishing and simply observing the nature around her. The fact that she learned how to back a boat trailer into small lot before ever acquiring her driver’s permit speaks volumes of her background. Becky spent many years on commercial fishing boats in Clearwater during her years following high school, where she became adept at various types of commercial fishing including gill netting for mullet, stone crabbing and hook and line for grouper. After obtaining her Captain’s license in 1984, Becky became a part time guide, but continued commercial fishing until 2000.  Tarpon and Snook were two of Becky’s most sought after species when guiding. 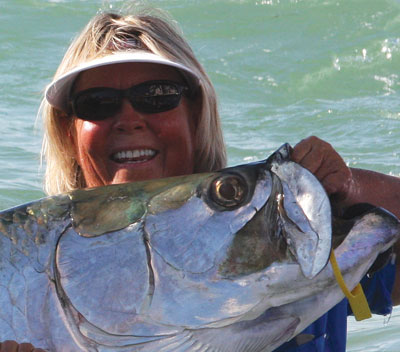 full time fishing guide. When asked what she found most challenging about fishing the back country areas of the Everglades she stated, “the tide and the visibility of the water.”

Almost all experienced back country anglers know all too well that water depth can be dangerously low in many areas, especially at low tide, so knowing the water and the tidal exchange effects is an essential ingredient to any angler’s safety and success. Due to the fact that the tannins in our local back country waters prevent the water from being clear, one cannot always effectively determine water depth using eye sight alone.  Doing your “homework” and acquiring knowledge of the mangrove maze of the islands, along with tidal changes and water depths, requires years of experience – which Captain Becky clearly possesses.

Becky remembers vividly getting her guiding start by sitting at local Everglades City restaurant, City Seafood, and waiting for people to come by at which time, she would initiate conversations with them about fishing. Most of Captain Becky’s first customers were acquired this way. Today, she has earned the respect of many other local fishing guides and her customer base is rock solid, based on great results and memories made on her charters.

Becky describes anglers as falling into one of two categories: “hunters” or “opportunistic” anglers. Becky proudly explained to me that she is a “hunter.” Hunters do just that; they hunt. They seek areas that she describes as being “alive.” In her explanation, areas that are “alive” have characteristics like prevalent baitfish, tidal movement, birds and structure.  “Opportunistic” anglers, on the other hand, tend to anchor in one or possibly two spots, waiting for the fish to show up and hopefully begin feeding, according to Captain Becky.

When asked what tips Becky could provide anglers from novice to expert levels she explains that one must “do their homework.” This involves learning the behaviors and feeding patterns of the targeted fish and the importance of keeping a log each time one goes on a fishing trip.

Captain Becky’s charter company is called “Everglades Fishing Charters” and she continues to run her charters out of Everglades City today. You can contact Captain Becky at www.EvergladesFishingCharters.com.