And the dig goes on 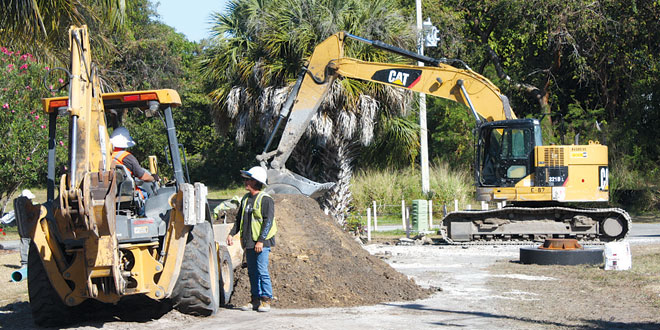 The Marco area of Caxambas, also known as “The Estates,” has been disrupted for quite some time as the sewer project travels through the hilly area built up with shells by the ancient Calusa civilization. Advanced Archaeology, Inc. has been with sewer contractors, Mitchell & Stark, every step of the way, especially when it comes to the zoned areas known to be artifact-rich.

Financed by the City of Marco Island and the Marco Island Historical Museum, work including shovel testing, unit testing and column sampling has now led to the final phase of the sewer and archaeological process. Caxambas is an area that has been relatively “undisturbed” over time which is why it has been found to be intensely rich with artifacts. Now in the midst of Phase III of the process, “the archaeological methods being used have never been conducted at such a large-scale for a Calusa Indian ceremonial mound/village complex, until now” explains Advanced Archaeology CEO Joe Mankowski.

During the Phase III process, which is being paid for by the Marco Island Historical Society, Advanced Archaeology is monitoring for any human remains as it is illegal in the state of Florida to desecrate a grave – even one that is unmarked.

The second aspect of Phase III involves “salvage and recovery,” according to Field Director Gene Erjavec. “Select spoils from the trenching of the sewer have been removed and staged at a temporary location for us to now sift through for artifacts.” The city was gracious enough to bring in fill for the area of sewer being archaeologically monitored so the mounds could be examined.

Now, the large mounds of shell and dirt, with their original locations clearly marked by numbered flags, sit in wait for archaeologists and many volunteers to search through them. Hopefully findings will bring answers to some long-asked questions regarding the mysterious Calusa Indian tribe.

Joe Mankowski explains, “we are scientifically documenting a cross-section across the entire length of the sewer trench that is presently being excavated at the Otter Mound area. This section is time-associated with the Calusa Indian life ways, dating to at least 1,000 years ago.”

“This dig is an archaeologist’s dream,” adds Erjavec as findings throughout the months-long process are leading to some interesting and groundbreaking finds.

“We have found evidence of post molds within the cross-sections of the trenches that occur at the base of the chiefdom mounds, which might be supporting evidence of multi-structural areas of living quarters for the secondary-tier of the community,” explains Mankowski. “Social complexity and hierarchy was furthermore evidenced by the mound-building efforts that were undertaken by this culture, by constructing a temple-mound and other mounds for the chiefdom-level of this society.” Otter Mound is believed to be where the main chief would have lived as it is the highest point within Caxambas.

Archaeologists believe that literally tons of shell was used to create these mounds to keep the Calusas high and dry. “Within these areas of suitable habitation, we have found cultural materials such as bone tools, shell tools, pottery, and animal bone, which is a testament and window into the daily lives of the Calusa Indians of the past,” furthers Mankowski. “This evidence has shown that these people were a sophisticated society: a communal-effort to support a subsistence based primarily on marine-harvested species of clams, oysters, turtle and fish.”

While it can never be 100 percent certain how the Calusas lived, Advanced Archaeology is constantly finding more and more evidence to support the current beliefs regarding Calusa life. As the company moves forward, it will be looking for volunteers to help sort through the many piles of dirt filled with artifacts. To become a volunteer, visit the Marco Island Historical Museum at 180 S. Heathwood Drive to learn more.