An active Chamber of Commerce 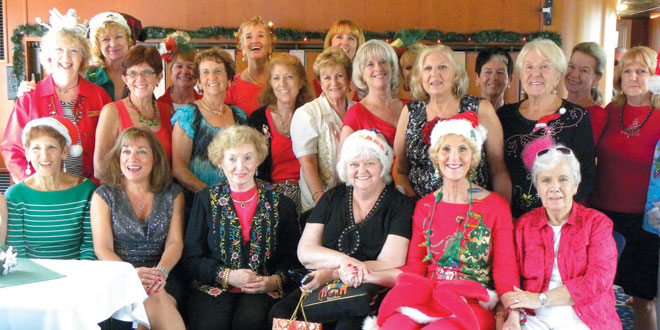 $1,210. That’s how much the Marco Island Area Chamber of Commerce turned over to Christmas Island Style on December 19th. The occasion was the Chamber’s monthly After Five event. This one, in keeping with recent tradition, was held at the Marco Island Hilton Hotel. Incoming Chamber President Nancy Carrington turned over all proceeds from 100 generous attendees to Christmas Island Style Chairman Steve Stephanides.

Festivities began with Hilton General Manager Mac Chaudry welcoming guests and expressing his appreciation “for the opportunity of holding this particular After Five at the Hilton as a yearly tradition”. Mr. Chaudry and the Hilton staff laid on a sumptuous spread for the guests who reciprocated with excellent appetites.

J. Robert carried on another tradition by providing background music, including most of the familiar seasonal tunes. He’s been at it a long time, and the quality showed.

Incoming Chamber President Carrington told the crowd that, “It is a privilege for the Chamber to work with Christmas Island Style”. In his response, Mr. Stephanides thanked the Hilton, the Chamber and the guests for helping to bring a unique holiday experience to Marco Islanders and visitors.

Marco Island’s Chamber of Commerce played host to its volunteers on a magnificent sunlit Sunday afternoon aboard the Marco Princess. The Chamber’s Executive Director, Sandi Riedemann, thanked the 37 volunteers and told them that, “The Chamber couldn’t function without you. Your greetings and smiles welcome, not only visitors, but islanders as well, and help them appreciate what the island has to offer. Katie [O’Hara], Donna [Niemczyk] and I thank you for undertaking all the important jobs that simply must be done.” Katie and Donna are the Chamber’s two professionals, together with the Executive Director. Ms. Riedemann also introduced Nancy Carrington, owner of Marco Island Florists, as the Chamber’s 2013 President.

The Marco Island Area Chamber of

Commerce is located at the Chamber Plaza on North Collier Boulevard, and has a wealth of material about the Marco Island area. The Chamber has represented island businesses for 35 years.

The Chamber’s guests enjoyed a luncheon of roast turkey and trimmings and had fun swapping Christmas presents as each volunteer and guest, in turn, selected a gift from the table or from a previous participant. The big prize, a box of cookies, passed through about eight sets of hands before it finally ran out of players. The anonymous cookie winner debarked in a hurry before yet another guest claimed the prize.

In addition to volunteers and guests, sponsors Bill Filbin, Realtor and winner of two Prestigious 2012 awards, and David Longfeld-Smith of Costco, were aboard for the festivities.

The Marco Princess accommodates upwards of 140 passengers. Captain Rodger Parcelles has successfully owned Sunshine Tours since 1984. The latest Marco Princess has been in service for about ten years.

‘Twas the week before Christmas

And all you could hear

Was the sound of friends chatting

And lots of good cheer!

The setting was CJ’s On the Bay where owners Curt and Jacquie Koon were hosts for the Annual Marco Island Chamber of Commerce President’s Club Soiree. About 30 members enjoyed a tasty outpouring of hors d’oeuvres and assorted drinks on a balmy December evening.

The President’s Club consists of members who make a donation of $100, in addition to their dues, to support various Chamber charitable functions.

Incoming Chamber President Nancy Carrington of Marco Island Florists, presided at a drawing in which she distributed shirts and flashlights thoughtfully donated by Jacquie and Curt.

President’s Club member Debra Shanahan summed it up, “It’s a pleasure to be with friends who have a positive outlook, enjoy the wonders of Marco Island, and take the extra step to help others.

Many thanks to Jacquie and Curt and the Chamber staff and volunteers for all they do.”