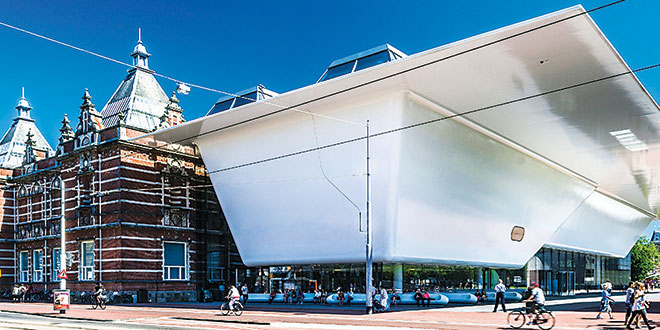 The Stedelijk Museum with its new addition. PHOTO COURTESY OF STEDELIJK MUSEUM

I first visited Amsterdam in the 70s; my husband and I were last there in the 80s. On that trip, after a week in the city, we traveled on to Brussels. We were amused when a guide who took us to visit Waterloo and some of the countryside chateaus of Belgium referred to Amsterdam as a “doomed city.”

On a recent visit there, I’m pleased to report that it is not doomed. It is a vibrant, diverse city, known for its tolerance, picturesque canals, and outstanding art collections. After a recent government sponsored overhaul and renovations to some of its main attractions, the city is even more inviting.

Following two weeks in Istanbul, we had planned two weeks in Holland. Regular readers of my column know that was not to be as my husband developed Achilles’ tendonitis and we had return home. I was limited to just one day in Amsterdam. I decided to use that time to make a quick tour of the tourist highlights for an impression of how it has changed in thirty years.

Emerging from Central Station, the main train station, I was immediately faced with big changes. The entire area is a construction site for new metro and subway lines, as well as condos and office space.

Looking past the security fences, piles of construction debris and ongoing construction, there were a number of new kiosks, built to look like traditional Dutch homes, selling tickets for canal boats, tours, museums, theaters. One of them houses the Tourist Office. Behind these kiosks are the first of many sites 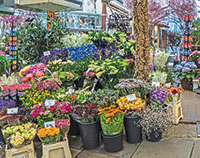 for the departure of canal tour boats. I seem to remember that on my last visit, there were limited options for canal tours. Some of the charming canals in the vicinity of the station are temporarily not so charming, as they are under construction for even more boat tours.

Still in front of the station, I looked to the right and couldn’t believe what I saw. Modern glass buildings and one of them was a high rise, the Regardz Silver Tower! On my first visit to Amsterdam, I remember a tour guide proudly noting that there were no, as she said in her Dutch pronunciation of an English word, “skycrappers” in the city. While there has been an attempt to keep contemporary tall buildings out of the city center, there are now 35 in other parts of the city that are more than 200 feet tall. The Silver Tower is shorter at about 180 feet.

As I proceeded up Damrak, the main street emanating out from the station, I was struck by how crowded the city was. It was Sunday and a beautiful day, but it was off season and the sidewalks, as well as those on the side streets were, as they say in Europe, “chockablock” or jam packed. Damrack is now a strip of chain stores, souvenir shops, amusement centers, and fast food outlets, most notably Doner kabob places, but also the familiar McDonalds and others.

When last I saw the obelisk National Monument on Dam Square, the steps at its base were populated with hippies (yes, even in the 80s). 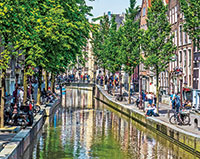 Today, those stairs are still a popular resting spot, and it is ringed with a sea of bicycles. Bikes have always been an important method of transport in Amsterdam, but there seems to be so many more of them.

One of the biggest changes is ongoing in De Wallen, better known as the Red Light district. It once was a seedy, marginal area which had become overrun with, reportedly, Eastern European organized crime and money laundering. In 2008, the government embarked on a ten year plan to clean up the area and make it more tourist centric. About half of the window front brothels and cannibis coffee shops were closed. The city purchased many of the 17th century buildings which have been converted into galleries, shops, restaurants, and theaters. Yes, there are still some prostitutes in the windows, but now there are other reasons to visit the area. The once infamous cannibis coffee shop, The Grasshopper, has transitioned into what appeared to be a very popular pub and steakhouse. A restaurant, Anna, opened in a former brothel in the shadow of the Oude Kerik or Old Church. There is a croissanterie next to an erotic shop, a New York Pizza next to an adult video store. A few doors down from a lady in a window is a high end clothing boutique.

Next, it was on to the floating Flower Market, Bloemenmarkt, which has been on the Singel Canal for more than 150 years. The fact that it floats dates back to the time when its products were brought in by barges. 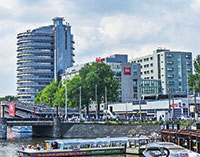 It has always been a block long, but it seemed to have grown. Not so much increased in size, but featuring many more products. Fresh flowers are still abundant; locals do come here to bring home fragrant bouquets and house plants. Hundreds of bulbs and seeds were for sale, as were cannibis starter kits, exotic plants and flowers and souvenirs ranging from flower bedecked bags to fake Delftware and kitschy wooden shoes.

On my second trip to Amsterdam, before there was a Rick Steves guidebook, I read a short reference to a secluded inner courtyard of homes in the middle of the city, the Begijnhof. Dating from the Middle Ages, it originally housed lay sisters of the Catholic Church. I had to search to find it. My husband and I were the only ones in this peaceful, serene courtyard and in deference to the privacy of the residents who now lived there, I took no photos. Its seclusion has certainly changed. A sign, blocks away, points to the location. Its sidewalks were overrun with people talking and snapping photos. I noted 3 group tours passing through. The word that came to mind was “circus”.

After a quick stop at Vondel Park, a popular park which has just undergone a 10 year renovation project, I arrived at my final destination, Museumplein. On our last visit, we had stayed at a hotel adjacent to it and spent many hours here. It is the location of the major art museums, Rijksmuseum, Van Gogh Museum, and Stedelijk Museum which houses modern art. The Rijksmuseum reopened last 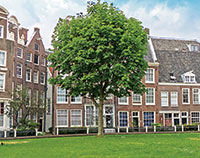 The Beginhof. photos by VICKIE KELBER

year, after a 10 year renovation. Van Gogh had been closed for a 7 month update, also in 2013. The Stedelijk, my favorite, had undergone 8 years of partial closure, renovation and expansion, doubling its space. Most controversial is a new white and glass extension which I’ve been told the locals sometimes refer to as “The Bathtub”.

I was so looking forward to revisiting these wonderful museums, particularly after their makeovers. Unfortunately, it was not to be and I sadly got on a tram to return to Centraal Station. On the tram, I noted yet another change. In addition to being able to purchase a ticket from the driver, there was also someone in a booth near the rear of the tram selling tickets. Not only did I have to swipe the ticket at the electronic reader when I first purchased it, I also had to swipe it when exiting.

The main sites in Amsterdam are so compact and so indelible that I conducted my self-guided tour without a map, relying on memories from thirty years ago. My regret is that I wasn’t able to revisit the art museums to enjoy those changes, but, perhaps another time.