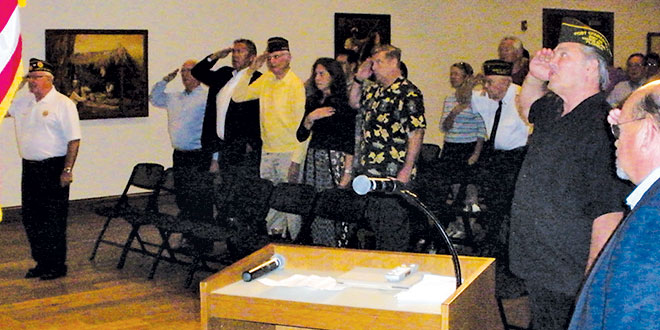 The Pledge of Allegiance was recited with reverence at the Christmas Island Style Holiday Salute to Veterans. PHOTOS BY DON MANLEY

The service of America’s military service men and women was recognized at the Christmas Island Style Holiday Salute to Veterans.

World War II veterans are known as “The Greatest Generation,” noted master of ceremonies Steve Stefanides, who is also the Christmas Island Style chairman. “There’s another “Greatest Generation coming along behind them,” he added, referring to the soldiers, sailors and Marines who have represented the country in battle in Afghanistan, Iraq and elsewhere in the Middle East over the last 14 years.

Stefanides also mentioned the importance of ensuring that military members and emergency responders, such as those who answered the call on 9/11 and afterward at Ground Zero, receive the healthcare that they deserve.

Held recently at the Rose History Auditorium, the annual Holiday Salute was kicked off by remarks from Jim Lang, commander of Marco’s VFW Post 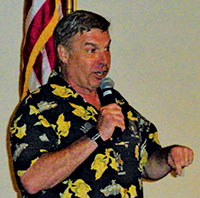 #6370 and Lee Rosenberg, commander of American Legion Post 404 on Marco.

Both recognized World War II veterans from their organizations who’d passed away during 2015: Owen Carr and Judge Thomas Pucci from the VFW, and Ray Paret, Will Uhl and Harold Rosenberg from the American Legion. Lang and Rosenberg said there were other veterans of the Great War who’d passed away this year who weren’t members of their organizations.

A moment of silence was held in their memory.

“The military is a success because of tolerance,” which boils down to “get along with each other as human beings,” Layton said.

He said race, religion and ethnic background are of no significance in the military, especially

in combat situations. “Your battle buddy on your left and your right, it doesn’t matter,” he added.

Layton, who served from 1976 to 2007, said he saw the horror that intolerance can reap while serving in Kosovo during the Yugoslav ethnic conflicts of the 1990s. “I saw many, many mass graves,” he said. “It was a terrible sight to see.”

He was accompanied at the Holiday Salute by Dr. Hakim Hamici, a Bonita Springs veterinarian who is also a native of Algeria. He is also a captain in the U.S. Army Reserves, who has served in Iraq and Afghanistan during his 22-year-long military career.

Hamici told the audience that he couldn’t even speak English when he came to America as a young adult. “I’m just really happy to be here,” he added. “Everyone dreams of coming here. God bless America. It’s the land of opportunity.”