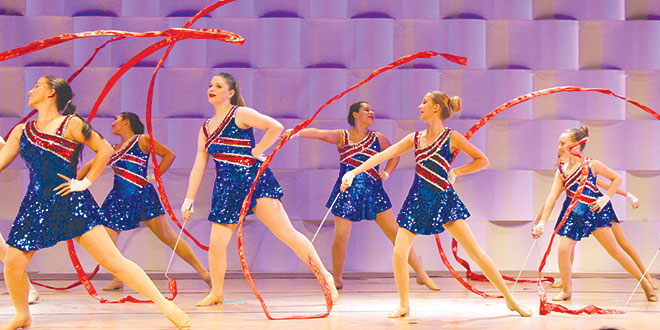 Jeff Popick was looking for a way to spend more time with his daughter, Alexis, doing things she really loves doing — namely singing and dancing. His entrepreneurial spirit and background in the entertainment industry took the desire one step further, and the American Patriettes was born.

A troupe of local girls ranging in age from 7-15, the American Patriettes is a performance group specializing in song and dance with a patriotic flare. Recently, the girls traveled to Miami Marlins Park — via stretch limo — to perform “The Star Spangled Banner” prior to the first pitch of a Marlins game, and this Sunday, Sept. 21, they will travel to Sun Life Stadium in Miami Gardens to sing the national anthem prior to kick-off of the Miami Dolphins battle with the Kansas City Chiefs. An album also is in the works.

“Alexis really enjoys dancing and performing,” explains Popick. “We wanted to put together a specialized group and take the performance level a

Above, The American Patriettes show off for the camera prior to heading totheir Miami Marlins performance.

little higher. We put our heads together and started figuring it out.” Together, they developed the idea about a year ago, and officially founded the group in February. Initially, it was to be a group of dancers who also sang a bit, and the target market was to be sporting events. Popick quickly enlisted a choreographer, Island Dance Academy’s Natalie Strafford, and vocal coach Cleo Lazaridis to work with the girls.

The girls began with a five-minute number dubbed “Salute to America,” which included a lyrical dance, a cheer portion and then went into a rendition of the national anthem. The Patriettes performed the program at IDA’s June recital.

As the group evolved in the first few months, though, Popick quickly realized that sports teams were looking for performers to sing “The Star Spangled Banner,” not stage dance numbers. As such, the group did a bit of a 180, becoming “a group of singers who dance a little bit,” says Popick. “We needed to separate out

Left, Members of the American Patriettes perform ‘The Star Spangled Banner’ at Tommie BarfieldElementary School as part of the school’s Sept. 11 commemoration.

The changes worked, and in addition to the Marlins and Dolphins, the American Patriettes performed at all three Marco Island schools — Tommie Barfield Elementary School, Marco Island Charter Middle School and Marco Island Academy — during their recent Sept. 11 commemoration ceremonies. The girls also traveled to Fort Myers on Sept. 13 to greet the Collier Honor Flight as it returned World War II vets from their trip to the National World War II Monument in Washington, D.C.

For Popick, the goal is to gain national exposure for the group. To that end, there is an album in the works. It will include American patriotic music. Some listeners will be familiar with, and some will incorporate completely original music. Currently, Popick and a team of professional song writers are working on some remixes, and he hopes to have the Patriettes in the studio and the album recorded in the next 4-6 weeks.

Ultimately, though, Popick hopes the girls gain two things from their time 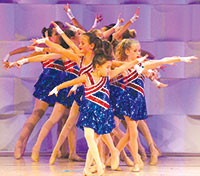 as a Patriette. First, he wants them to understand what it means to be an American and the responsibilities that come with that privilege. “Freedom to me means everything,” he says. “Everything we do in America relies on the single, core philosophy of freedom.”

And, it seems like the girls get it. When Popick asked each of them why they love America, they all talked about freedom and what it means to them.

Secondly, though, he also wants the girls to just have fun with the experience. “This is to enhance the girls lives. I want them to enjoy what they are doing. I think the world misses that part a lot. We are focused on so many other things that we miss out on the fun part,” he says.

Popick thinks the group is well on its way to accomplishing this second goal: “When they walked onto the field at Marlins Park, I saw their faces light up. The girls were in awe.”