Along the Great Florida Birding and Wildlife Trail 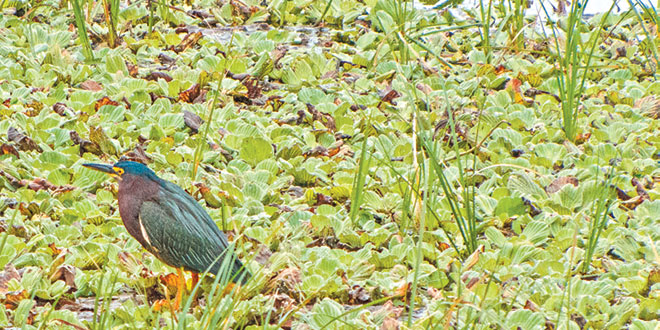 One of the many Green Herons.

The Florida Fish and Wildlife Conservation Commission has identified 515 locations throughout Florida as part of The Great Florida Birding and Wildlife Trail (GFBWT). The 2,000 miles of “trails” feature excellent bird and wildlife viewing. Highway signs identify each site, and there are guide booklets and a smartphone app available, as well as a very helpful website: floridabirdingtrail.com. At this website, the guide booklets can be downloaded and paper copies ordered. Divided into four geographical areas, each section of the GFBWT has two or three “gateways” with staffed visitor centers that provide information and loaner optics that can be checked out.

Here on Marco, we are familiar with the GFBWT because our own Tigertail Beach is one of 122 sites in the South Florida section. The staffed gateways in the South section are located at the Arthur R. Marshall Loxahatchee National Wildlife Refuge in West Palm Beach and Corkscrew Swamp Sanctuary in Naples.

A friend invited me to visit what the website describes as “one of the best birding and wildlife viewing locations in Florida,” the Stormwater Treatment Area 5/6 (STA 5/6) in Hendry County. Part of the South Florida Water Management District, Area 5 was developed to help with restoration of the Everglades by removing phosphorus from agricultural runoff via four water impoundment cells. Each cell is 2 miles long by 1 mile wide which means a trip around just one of them is six miles. More than 200 species of birds have been seen in this 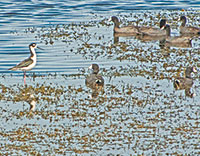 Until January 2013, access to this area was limited to guided tours. Now, it is open Friday through Monday for hiking and biking. The Hendry-Glades Audubon, however, continues to provide car caravan tours on selected dates. Information about those guided tours can be found at www.hendrygladesaudubon.org. This area is also open for seasonal hunting on Sundays; on those days, it is closed to the non-hunting public.

My friend and I wanted to explore the area on our own, so we chose a non-guided tour day. We chose to walk, although had we brought our bicycles; we could have covered more area. We packed cameras, binoculars, sunscreen, sun hats, water, snacks and lightweight rain ponchos because of the possible rain that was forecast. We brought lunches because we did not know what amenities we might pass along the way. Good thing we did, as once we left the Naples area, we saw not one store or restaurant.

Outfitted with directions printed from the internet and our smartphone GPS, we set off early in the morning for the 84-mile trip. We had no idea what we might encounter as the directions used numbered routes as identifiers when we had to make turns and concluded at what was indicated as an “Unknown Road.”

On our trip there, we traveled through various habitats. The interplay of morning fog and early light made the swamplands north of Route 75 and west of Route 29 particularly appealing. We didn’t stop for photos because I knew a quick snapshot

Along the Great Florida Birding Trail. PHOTOS BY VICKIE KELBER

would never be able to capture the beauty. We traversed citrus orchards and cattle ranches and saw some deer along the way, as well as a number of Sandhill Cranes, Belted Kingfishes, and, of course, Cattle Egrets.

The first “new” bird sighting for us along the way was a Crested Caracara. Part of the falcon family, it appeared to me to be just a more attractive Turkey Vulture. The remains of a wild boar carcass on the side of the road is probably what attracted it. According to my birding book, Caracaras often chase off Turkey Vultures and even may harass them into regurgitating what has been ingested.

After just one missed turn, we did find our destination. There is a primitive parking lot as well as primitive restroom at the entrance. A map of the area is posted, but we didn’t find it particularly helpful, so we just set out without really knowing where we were going. There is a picnic shelter as well as a 240-foot boardwalk and observation deck, but despite walking eight miles, we did not find either. I know it was eight miles because I used the Nike Running App on my iPhone. 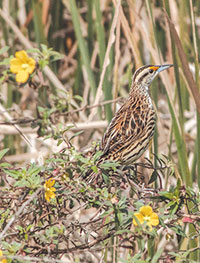 An Eastern Meadowlark blends in well withits surroundings at STA 5/6.

in splendidly with their surroundings. Common Moorhens decked out in their winter “attire” rather than the more distinctive red bills of summer, and Coots were plentiful as were more duck species than I could even begin to identify.

Various hawks were noted, including the Red-Shouldered and Short-Tailed. Swallow Tail and Snail Kites were plentiful, as were Red-winged Blackbirds and a few Eastern Meadowlarks. Debris from the Snail Kites — very large empty snail shells — were found all along the levee roads.

There were probably many more species that we saw, though. I’m not a bird expert, and really only know the more common ones. In fact, there were some that we had no idea what they were, even after consulting the two bird books we had brought along with us.

We saw many tracks from bobcats and raccoons and a few turtles lined the banks of the water. Fortunately for us, it was cloudy, so we didn’t have to deal with too much sun or too many alligators sunbathing on the side of the road. Their frequent tracks across the road with their distinctive feet and tail drag indicated some very large ones, and we occasionally saw those giants in the water or were startled by ones who had been startled by us when they suddenly jumped into the water from the levee banks.

I’m glad that we chose to explore the area on our own, but due to the vastness (17,000 acres) of STA 5/6, I would recommend anyone interested take one of the guided car caravan tours.