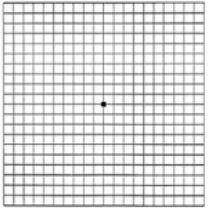 Age-related macular degeneration (AMD) is a retinal degenerative disease that causes a progressive loss of central vision. It is the most common cause of vision loss in individuals over 55 and, according to the Foundation for Fighting Blindness,  an estimated 10 million people in the U.S. either have AMD or are at substantial risk of developing it.

Study shows that genetics seems to be a major factor in more than half of the diagnosed cases.

What are the Symptoms?

Sometimes your ophthalmologist will discover traces of the disease before you experience symptoms. The first sign of AMD may be blurring of central vision, while attempting close work such as reading or crafts. Straight lines may appear distorted or warped. As the disease progresses, blind spots may form within the central visual field. If one eye has AMD, the other eye will often develop it. The extent of central vision loss varies depending on the type of AMD — dry or wet.

Wet AMD accounts for about 10 percent of all cases of macular degeneration. Abnormal blood vessels grow beneath the macula, leak blood and fluid into the macula that damage photoreceptor cells. Wet AMD often progresses rapidly and can cause substantial loss of central vision.

Dry AMD accounts for about 90 percent of all cases, and normally affects vision less than wet AMD. One characteristic is the accumulation of tiny protein and fat-containing ‘drusen’ deposits beneath the photoreceptors in the retina. The origin of drusen is unknown, but they may be from waste products of various cells and tissues of the retina. Drusen may interfere with macula health, causing progressive degeneration of the photoreceptor cells. Drusen deposits can be present without vision loss.

Reduction in central vision from dry AMD occurs gradually over many years. Vision may remain stable between eye examinations. People with dry AMD do not usually experience a total loss of central vision but finely focused vision may become more difficult.

Research suggests that medium- and large-sized drusen present a greater risk for the progression of dry AMD to wet AMD. Wet AMD causes more severe vision loss. Although no standard 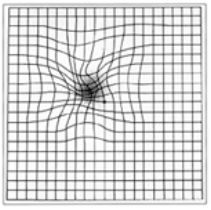 Grid as seen by someone with macular degeneration

Are There any Treatments Available?

Excellent progress is being made in understanding, predicting, and treating wet AMD. Scientists have discovered new causes including genetic and environmental factors, as well as possible risk indicators. Pharmaceutical companies are developing wet AMD treatments. Researchers are studying cell transplantation to preserve and/or restore vision.

Numerous clinical research trials are being conducted to evaluate treatments for wet AMD. Some of these have been effective in halting the progression of dry AMD as well.

AMD may be related to dietary fat, according to scientists studying people with early- and intermediate-stage disease. Study subjects who reported eating lower amounts of vegetable and animal fat were less likely to develop advanced AMD.

Fish and nuts can slow the progress of AMD. Eating fish,  which is high in healthful omega-3 fatty acids, has a protective effect. Though nuts are also protective, researchers did not determine which nuts, or how much of them, should be consumed.

Carotenoids are possible protectors against AMD. Researchers found that the more dietary lutein and zeaxanthin you eat, two carotenoids found in green and colorful vegetables, the lower the likelihood you have of developing advanced AMD. These carotenoids are highly concentrated in the macula and may be protecting it from damage.

The Age-Related Eye Disease Study (AREDS), conducted by the National Eye Institute, revealed that a dietary supplement containing a combination of vitamins and minerals could help reduce the risk of advanced wet AMD and vision loss in people who are at greatest risk.

Check out www.nei.nih.gov/amd for more information about the AREDS recommendations.

What is the Amsler Grid?

You can evaluate your eyesight for possible symptoms of AMD using a simple home testing device known as the Amsler grid. It consists of parallel and perpendicular lines and looks like a sheet of graph paper. By focusing on a marked spot in the middle of the grid, it is quite easy to detect blurred or distorted vision. The Amsler Grid is not a substitute for frequent eye examinations or an expert medical diagnosis.

Information from the Foundation for Fighting Blindness.