Again a Hit with Players and Fans 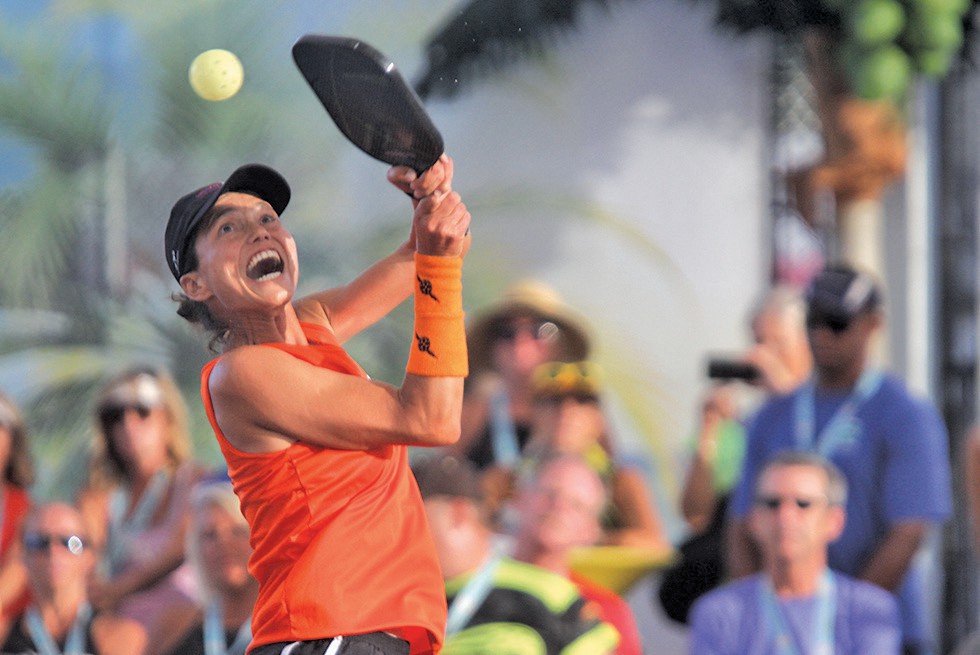 This year’s event may be recently completed, but organizers are already considering what they’d like to see at the 2018 Minto U.S. Open Pickleball Championships.

Adding courts at the tournament’s home, East Naples Community Park, to enable an additional 500 participants to take part in the one-week long event will be among the topics included in the planning for next year’s Open. 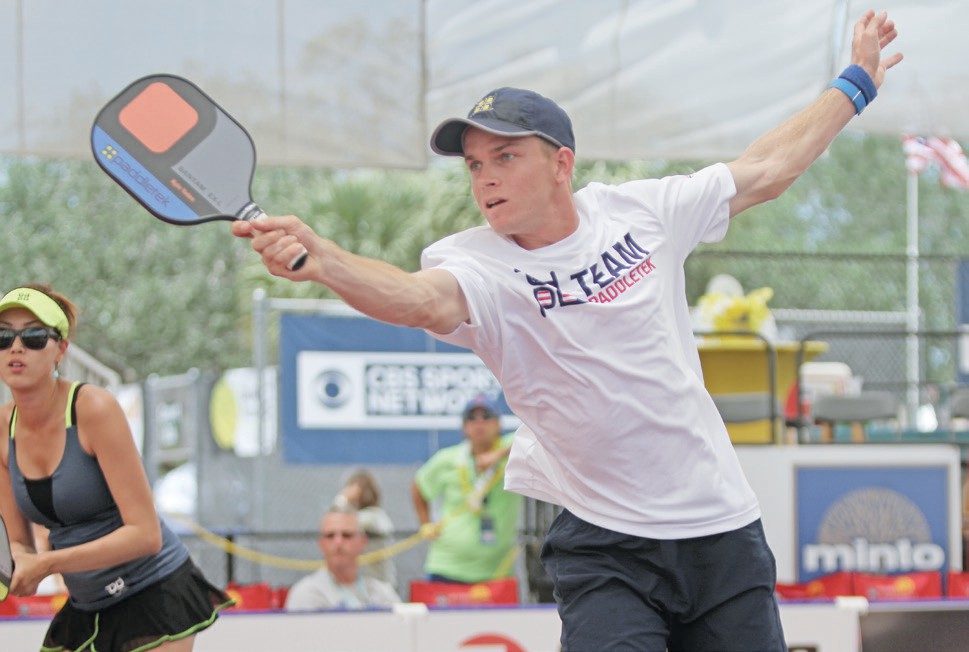 Kyle Yates hits a shot in the mixed doubles semi-final. Yates won in the men’s championship.

said Jim Ludwig, the event’s director and the executive director of the nonprofit Pickleball For All that is dedicated to introducing the sport to children and adults.

Ludwig is a member of the Open’s creator and operator, Spirit Promotions, along with Terri Graham, the organization’s president, and Chris Evon, its executive director. 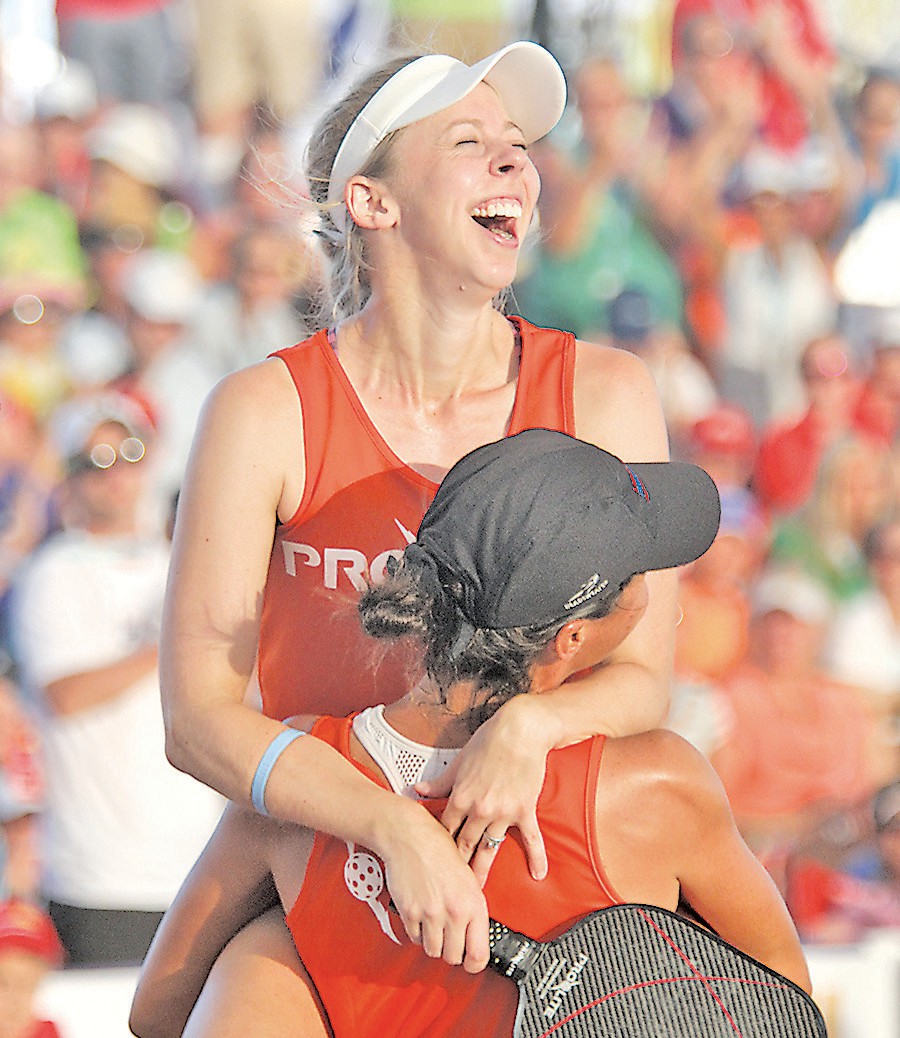 Corrine Carr Siebenschein get a celebratory lift from Simone Jardim after the two won the mixed doubles championship.

The tourney’s 2015 debut attracted 866 participants from 39 states and seven countries.

“We’re hopeful the county is going to build additional courts for us and if they do that, we’ll be able to take a few hundred more players,” said Graham. Additional courts, she added, would benefit not just the tournament, but also 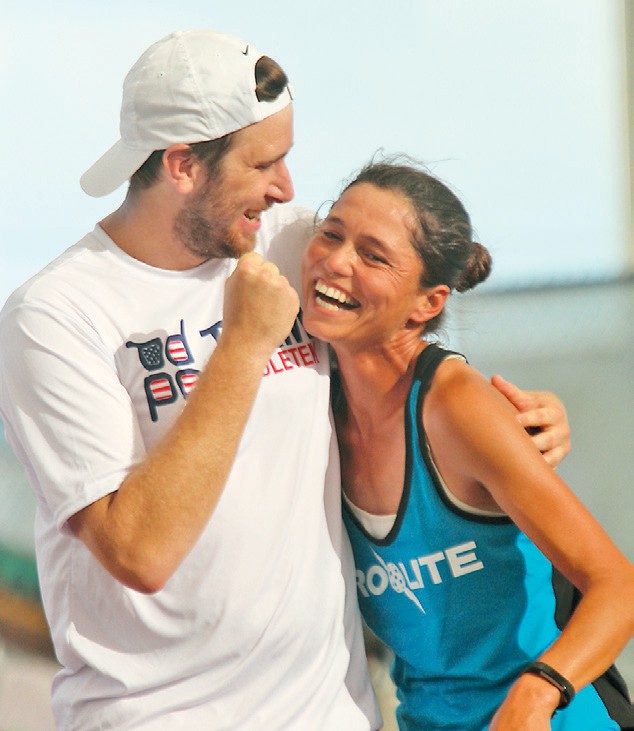 help accommodate daily demand at the park, which is a pickleball hotbed in the community.

Invented in 1965 in the Pacific Northwest, the racquet sport has become a popular form of recreation in Southwest Florida, especially among the 50-and-above crowd, and it’s reputed to be one of America’s fastest growing recreational sports. The Sports & Fitness Industry Association estimates that more than 3 million people in the U.S. that play pickleball. 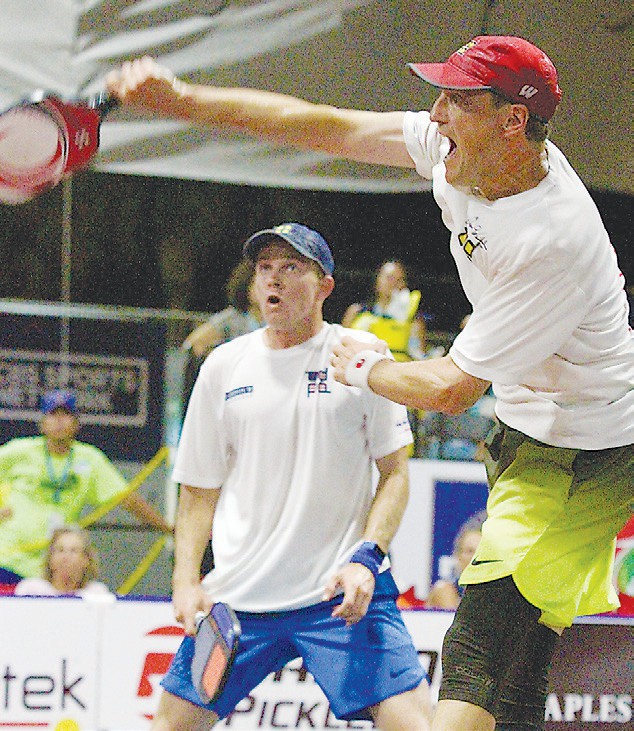 Dave Weinbach hits the winning shot in the men’s championship match as partner Kyle Yates of Ft. Myers, looks on.

a blend of tennis, ping-pong and badminton, played on a badminton-sized court using a solid paddle and a perforated, plastic sphere that resembles a waffle ball. Play can involve two or four players, who use the paddle to send the ball over a 3-foot-high net to their opponent.

Final data was still being tallied, but Jack Wert, executive director of the Collier County Convention and Visitor’s Bureau, estimated that 12,000-to-15,000 spectators, many

from outside Southwest Florida, took in the action this year.

The 2016 tournament and its 10,000 to 12,000 spectators generated $2.5 million for the Naples-area economy, according to the Naples, Marco Island, Everglades Convention and Visitor’s Bureau.

That total is expected to be exceeded by this year’s event.

“I would say that $2.5 million is a minimum and we are anticipating it will be larger than that,” said Wert.

The impressive stadium court at the U.S. Open Pickleball Championships. The $750,000 structure was paid for with Tourist Development Council funds.

represents East Naples, played a key role in helping make the tournament a reality. She was present for championship play on the Open’s final day.

“It was great to see the players and some of the young people, they really play a strong game,” she said. “I was so proud of them because they were so focused on their games, but yet they took time to talk with people.”

Fiala cited as a 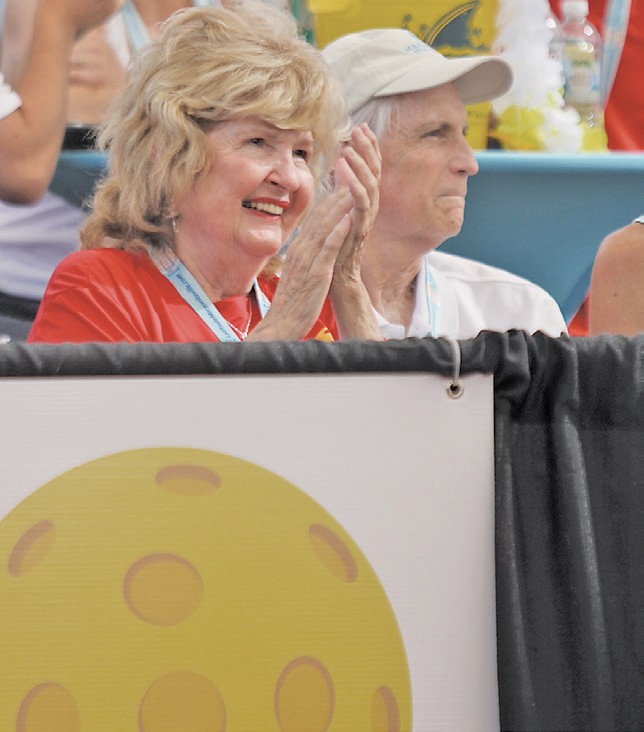 County Commissioner Donna Fiala was pleased with the second installment of the U.S. Open Pickleball

highlight the flag ceremony that preceded the final match, which saw players parade around the park’s Zing Zang Championship Court bearing the flags of their home countries.

“It was just really good,” she said. “It was wonderful.”

Ludwig was also thrilled with how this year’s event unfolded and they praised the contributions of the more than 200 people who volunteered to work at the Open.

“The players and the visitors were very appreciative and

complementary of all we did and the county was as well,” said Ludwig. Almost everybody with the county spent time at the event and they couldn’t say enough about it.”

“It’s very, very satisfying to see so many people so happy, coming down to play pickleball and just having a blast,” she said. “Seeing people dancing spontaneously; no matter the troubles in their lives, all that 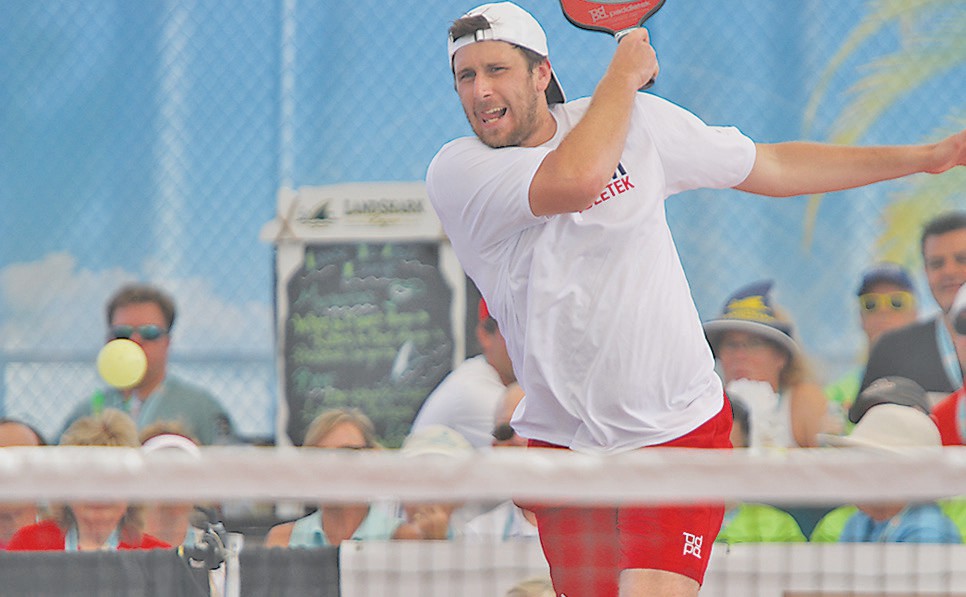 goes away for just that one week.”

Wert said that from all indications, players and spectators were again thrilled with event, especially the new $750,000 permanent shade canopy erected over the Zing Zang Championship Court and its 700 seats. The canopy was paid for by Collier County and Minto, developer of the Isles of Collier Preserve community, located adjacent to the park.

last year and we’re really looking forward to what 2018 and beyond will bring with this event,” Wert added. “We said a year ago that this was the pickleball capital of the world and I think we proved it this year.”