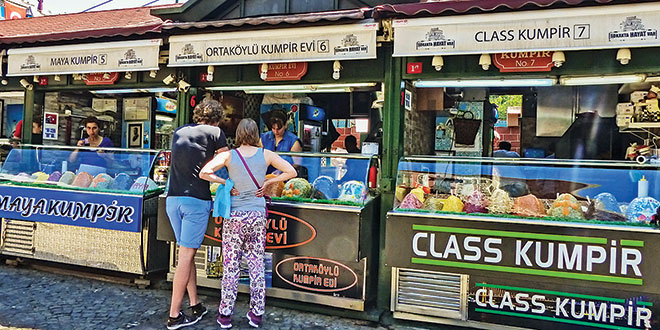 Kumpir stands with their baked potato toppings piled high line the street in the Ortakoy district of Istanbul. PHOTOS BY VICKIE KELBER

Many people have asked me about the food in Istanbul; we loved it. There was a wide variety of options available, both in terms of eating establishments and food choices.

Street food is popular. Red push carts dot the streets and hole-in-the-wall kiosks are located throughout the city. For a quick breakfast or snack any time of the day, there is limit — thin rounds of baked dough that have been dipped in molasses and sesame seeds. During the day, other carts sell grilled corn on the cob and chocolate covered chestnuts. Kumpir stalls sell baked potatoes with a variety of optional toppings. Similar stands offer waffles with many choices of toppings. The Galata Bridge is home to dozens of fish restaurants; some offer the opportunity to purchase take away balik ekmek, grilled or fried fish sandwiches.

Börekçi are tiny pastry shops with take away windows for börek, flaky filled or layered pastry. Fillings include cheese, meat, potato and spinach. There are take away kiosks for the many different types of kebabs and köfte, meatballs popular in Turkey.

My favorite street option were the many fresh juices available at juice stands everywhere. Each morning, I stopped for fresh-squeezed orange juice. In the afternoons, it was pomegranate juice. As the warmer weather arrived, skewers of pineapple and watermelon made their appearances. Because one should not drink the tap water in Istanbul, I don’t think we ever walked more than a block without seeing someone 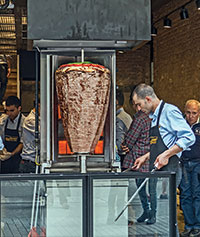 selling bottled water. We always made certain that the seal on the cap was unbroken before purchasing any.

Some ice cream kiosks feature Mara? ice cream made from goat milk and wild orchid powder and beaten with a paddle. Along Istiklal Caddesi, the main shopping street, there are traditionally dressed vendors who made quite a show of stirring the ice cream with long, wooden spoons and interacting with the crowd that gathers to watch.

Two street foods I refused to try were midye dolma (stuffed mussels) and kokoreç (roasted lamb intestines). I couldn’t believe the trays of mussels that were displayed for sale out in the open sun; it was scary. It goes without saying why I passed on the kokoreç.

Moving up from the small stalls and shops are lokantas, simple restaurants where the food is pre-made and often on display in warming trays. Frequented by workers and shoppers at lunch time, we ate at some popular ones and found the food well prepared and fresh. In addition to the kebab and köfte shops, there are pideci, which sell the Turkish version of pizza known as pide or lahmacun. More oblong than round, they come with a variety of toppings typically made of a minced meat mixture. Meyhanes are restaurants that feature a wide variety of mezes, starters, while full service restaurants are restorans.

The bottom tier of the Galata Bridge is lined with restaurants; the Galata Tower looms in the background.

and a spicy sausage. It is served with tea (chai), not coffee, and sometimes börek and yogurt.

Turkish cuisine is known for its mezes, and it is permissible to make an entire meal out of these options. Often, they will be presented on a big plate or cart, allowing diners to choose which ones they want. Offerings can include grilled or fried eggplant served a variety of ways, mint yogurt dip, pinto and fava beans, cheeses, stuffed grape leaves, artichoke, grilled meats, seafood, melon, chili tomato paste, humus.

Grilled and roasted lamb, beef and sometimes chicken are served in any of a numerous variety of kebabs and köfte. I’m told there are hundreds of different types of köfte. These meatballs are not the traditional round ones that we think of. Rather, they tend to be served more like patties or in strips. There is no pork. Manti is similar to dumplings or ravioli filled with meat, fish, chicken or spinach and usually served with a garlic, yogurt and tomato sauce.

Typical side dishes are pilav with rice or bulgar or seasonal vegetables. Almost every traditional meal we ordered came with a chili pepper garnish. Common side salads are roka, rocket (arugula), and çoban, a “shepherd’s salad” of tomatoes, peppers, cucumbers and olive oil.

Vegetarian dishes include the aforementioned stuffed grape leaves (dolma with different types of vegetables, such as eggplants, tomatoes, zucchinis, peppers) that are filled with various mixtures and bean dishes. Options made without meat

One of the many kiosks selling fresh-squeezed juices. One Turkish Lira is just under 50 cents.

Unless it involves dark chocolate, I am not a big sweets eater. Lokum, or Turkish delight, is sold all over the city. A gelatinous confection, there are a variety of flavors, none of which I really liked. Helva, made from crushed sesame seeds is also sold at all the markets and sweet shops. My favorite dessert was a caramelized pumpkin concoction similar to a flan. My husband’s was a very rich rice pudding. We both loved the baklava, a pastry made of filo dough, chopped nuts and honey, a portion of which typically was four small log shaped pieces. Almost daily, I stopped at a small pastry shop near our apartment to bring home two servings for an afternoon snack.

Ayrun is a popular Turkish beverage made from yogurt with added salt. We both passed on it. Flavored soda water is found on most menus, as are common sodas like Coca Cola. My favorite drink was visne suyu, or sour cherry juice. Chai is served in glass tulip shaped cups. It comes light or dark and in a variety of flavors, apple seemingly to be the favorite. The strong Turkish coffee is typically served 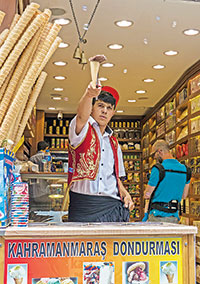 after lunch or dinner. Since it is brewed with the sugar, you need to order the level of sweetness in advance. If you want decaf, you probably need to go to one of the chain coffee shops. Our favorite was Lavazza World Best in the shadow of the Galata Tower. It even offered New York style cheesecake.

Raki is a traditional anise flavored liquor. Just as ouzo in Greece, it is usually served mixed with water which turns it milky white. Thus, it’s nickname, “lion’s milk”. Although Turkey is the fourth largest producer of grapes in the world, only a small percentage is used for making wine. I sampled only the red gifted to us by our landlady and found it to be very smooth.

Many of the American fast food chains are here as they are almost everywhere. In two locations on Istiklal Street, Mc Donald’s and Burger King are right near each other. I also saw Popeye’s, Arby’s, Krispy Creme, Caribou Coffee and Starbucks.