Dr. Allen Weiss, President and CEO of NCH Healthcare Systems, had a crowd of 200 plus listeners stand up, and quickly sit down as he asked the above questions. With only a handful left standing, he continued. “Statistically, any guesses as to what percent (of Americans) actually pass that test? It’s small; four percent is what it is.”

Sponsored by the Marco Island Civic Association, Dr. Weiss’s lecture, held on October 29, was entitled, “The Affordable Care Act Symposium.” The packed auditorium showed both enthusiasm and frustration regarding the federally mandated healthcare reform. It could better be described as enthusiastic frustration.

Piquing the interest of so many regarding the Affordable Care Act, Dr. Weiss focused the majority of his presentation on healthy living, stating: “The bottom line: change your lifestyle and change your healthcare system.”

“When we look at the cost of healthcare, globally… the United States spends twice as much a year on healthcare as Singapore does. Singapore is 26 square miles. Marco Island is about the size of Singapore (approximately 24 square miles). When we look at the figures it’s very interesting. Singapore is spending half as much on healthcare as we are on Marco Island. They’re living longer, better and healthier and they have the highest per person gross domestic product… and that gives us something to aspire to.”

Dr. Weiss explained that Singapore is not allowing anyone born passed 2001 to use tobacco products. “What if we had a tobacco free island?” he queried. One place that is tobacco free – or close to it – is Naples Community Hospital. For two and a half years, the hospital has not hired smokers and is down to only 11 percent of its employees who still smoke. A dramatic dip in employee doctor visits was seen almost immediately.

The key to Singapore and NCH’s strides in overall better health? Change. “We must change to move forward.” Describing Singapore as a country that pulled itself up by the bootstraps within the past 50 years, Dr. Weiss accredited the United States with that same perseverance. “But transitional zones make people uncomfortable.”

Rumors are started, lies are told, fear of failure and distrust in government have led to the unease of the initiation of the Affordable Care Act. Dr. Weiss attempted to calm fears and continue to explain ways in which healthcare can become more affordable, even as a nationwide system.

Case in point: “Being first doesn’t mean being the best. For example, the iPad was not the first tablet and Facebook was not the first social network… the (current) Affordable Care Act is version 1.0.” Over time, Dr. Weiss assured that versions 2.0 and 3.0 should continue 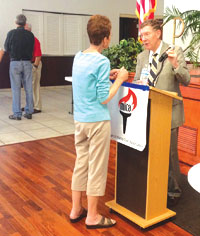 to get better, adding, “it’s here and it’s staying and it’s stressing everybody and their brother.”

“Was anybody around and (following) the news in 1965 and 1966 when Medicare got going? (It had) the same kind of push back… they also said the same with Social Security. There was a big push back with (worries of) socialism and communism. Same thing when the vets came back from World War II and we got them in programs and education. These (types of) programs are big societal changes and big controversy.”

But many Marco Islanders – locals and snowbirds, alike, have little to worry about when it comes to their healthcare coverage – for at least 13 years anyway. “People who are already over the age of 65, if you stick with Medicare, you’re going to be fine. It’s going to be around for 13 years until it gets insolvent. And if we’re smart going forward, we will decrease our costs and hopefully do the things I’ve talked about in the last hour.”

Better personal health, eliminating insurance fraud, cutting costs on unnecessary procedures and the use of technology were all discussed in length as ways to continue to modernize, improve and reduce the cost of a universal healthcare system.

But what if it fails like the program in Massachusetts in which the Affordable Care Act was partially modeled after? “What happened in Massachusetts is people who were sick and couldn’t get (healthcare) elsewhere, moved to Massachusetts. It became a sink hole for sick people.” The influx quickly caused problems with the state-run system.

Overall, Dr. Weiss’s view of the Affordable Care Act seemed hopeful, yet he continued to fall back on the importance of healthy living and education. “Has anyone ever heard of a ‘Blue Zone?’ No, it’s not the Blue Martini,” he quipped. “A Blue Zone is an area in the world where the people live to be 100 or more. Right now, Marco Island is one of those Blue Zones.” He continued to discuss how those who are insured statistically live much longer than the uninsured.

As for education, he discussed the Safe and Healthy Children’s Coalition of Collier County, pointing out that the number one cause of death of children under five is drowning. “It costs $50,000 for every drowning. Rather than letting them drown, let’s find out areas (of education) in need and train them. Weiss drilled the point home asking who will pay for that child’s death if it is uninsured.

Marco Island may be a Blue Zone, but much of Collier County is not. Many are poor and uninsured with more than sixty percent of the children receiving the free or reduced lunch program aimed at helping the “economically needy” community.

“We must change to move forward,” stated Weiss. As for the transition, “It’s going to be a painful time,” he conceded. “But think about your kids and your grandkids.” His best advice to help reduce the cost of national healthcare today: “My suggestion is lose weight, quit smoking, be less sedentary and eat the carrot.”