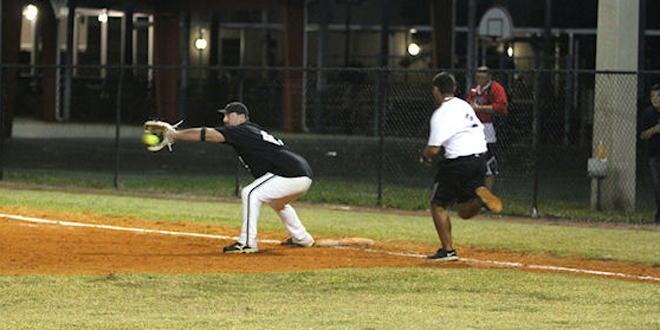 Over at TBE, Joeys held on to a 15 to 14 victory over Marco Island Vacation properties (MIVP). Ahead 15 to 13 in the bottom of the seventh, Mark Feola put Joeys back on their heels when belted a HR to get the game to within one, with one out. Then with men on 1st and 2nd, Taylor Goldsmith lined deep to right center field and Tony Oliverio made a great catch and on a controversial call, Andrew Vale was doubled up trying to get back to 1st base to end the game.

Game two saw Cocomo’s facing off against the re-vamped Islander Pool. Islander Pool with a host of new young players gave Cocomo’s a run for the fences with home runs by Rich Dahn (3rd of the season) and Matt Johnson. Cocomo’s led by Brian Day’s HR, 3 hits from Marc Canady and Salem Lake and two hits from Jim Blankenship and Brendon Hicks proved too much for the “pool guys” and notched their 2nd victory 14 to 9.

Game Two at WB saw an exciting game where Kretch’s with a 4 run 6th inning tied the game, The Brew Crew took back the lead with two runs in the top of the 7th and then was able hold Ketch’s scoreless in the bottom half to notch their 2nd victory 11 to 9, while Kretch’s dropped to 0 and 2.

Adult Softball will be off Thanksgiving but will resume action on 11/29 at Winterberry and TBE fields, games start at 6:15 pm. Come out to watch some of the action.