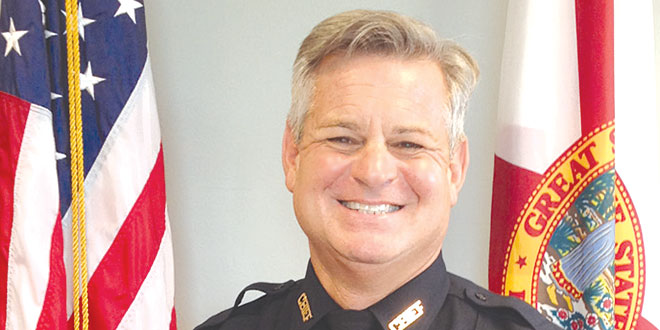 Since 2009, many Marco Islanders have gotten to know Al Schettino while he was out on patrol or walking the halls of one of the island schools. Now, they will get to know him as the Acting Police Chief of the Marco Island Police Department.

On July 25, City Manager Roger Hernstadt announced that Schettino was appointed to the position, roughly two months after former Police Chief Don Hunter left the department to start his own private security firm. When Hunter handed in his letter of separation from the city in May, Hernstadt asked both Schettino and Assistant Chief of Police Dave Baer for transition plans.

“When Hunter submitted his notice, I had recently completed the interviews with the former MIPD employees,” Hernstadt says. “I sent an email to all employees and invited them to come in and discuss their experience with the department. Fulfilled and unfulfilled expectations. Opportunities for improvements. I also asked if they felt there was anyone in the department that was potential chief material. Two names percolated to the surface: Baer and Schettino.”

The transition plans were “well-rounded assessments of where the department is and where it needs to go,” adds Hernstadt. “Both candidates could get us there… Baer withdrew his name from consideration, which made the decision easy.”

Florida born, Schettino spent most his childhood and all of his adulthood living in northern New Jersey. He remembers always wanting to be a police officer: “In school, the guidance counselor asked me what I wanted to do with my life. I remember my two choices. One was a law enforcement officer because I always wanted to help people. The second choice was a pilot.”

Schettino never earned his wings, but he has spent the last 37 years helping people as a police officer. Over the years, he has worked in every aspect of a police department from teaching at the academy to being a narcotics detective to administration to holding the position of Deputy Chief of the Ridgefield, NJ, police department.

As Deputy Chief, Schettino managed a staff of 57 and supervised a multi-jurisdictional 911 dispatch center as well as Ridgefield’s EMT operations. According to Schettino. Ridgefield is very similar to Marco Island — a densely populated area with about 12,000 full-time residents and a thriving business community.

He is most proud of the time he spent working with the D.A.R.E. program in the state of New Jersey. Short for Drug Abuse Resistance Education, the D.A.R.E. program is an international education program seeking to prevent the use of controlled drugs, membership in gangs and violent behavior. It originated through the Los Angeles Police Department in California.

“I strongly believed in the philosophy of going into the classrooms and working with the kids, developing the relationships with the students,” Schettino notes. “As much as it helped the kids, we also realized that it was sensitivity training for our officers. As police officers, we put up barriers to protect ourselves, the program helped break through those barriers.”

In 2005, after three years as Deputy Chief in Ridgefield, Schettino retired, and with his sights set on Florida, he and his wife, Carol, and daughter, Alexandra, moved to Marco Island. While he enjoyed the relief from the cold New Jersey winters and working on his house, Schettino soon decided it was time to put the uniform back on. By 2009, he found himself working on patrol for MIPD.

“I understood that one of the best ways to use my talents was in law enforcement,” he says. After a year on patrol, the school resource officer position opened up, and Schettino was a no-brainer for the job thanks to his years of working with the D.A.R.E. program. Over the years, his smiling face has become a sign of safety and security for Marco Islands youngest residents.

Schettino was honored to accept the position of Acting Police Chief: “This is my community. This is my home. I want to build on the successes of the previous chiefs and make our department a model for other agencies throughout the country.”

As Acting Chief, Schettino’s main goal is maintaining an open relationship with the community, incorporating more community programs above and beyond the department’s regular duties of protecting and serving. This includes things like volunteering for the community beach clean-ups and organizing a department team for Relay for Life.

“I believe we need to be out in the community interacting with the people, working together with the community. I want (the officers) to have a smile on their faces and be helpful and respectful at all times…I want to make it a dynamic, progressive, community-oriented police department,” explains Schettino.

He plans to do this by analyzing the structure of the department and devising ways to utilize personnel effectively. His first move was to put Officer Paul Ashby into the school resource officer position for the 2014-2015 school year.

Hernstadt is cautiously optimistic about Schettino’s plan. “He and I have had a few meetings and will have more on where he is relative to carrying out his plan,” he says. “We need to be sure we are moving forward in the right direction, and then go into implementation phase.

On paper, it looks good. Now, the question is can he and his command staff and the officers themselves accomplish those things. It is yet to be seen, but I am hopeful. The reaction that I have gotten is that they are extremely supportive of him, but the proof is in the doing.”

Schettino is hopeful as well: “We have a wonderful group of dedicated men and women working in this police department. They are really dedicated to the community. My job will be to continue to motivate them into becoming the best that they can be as they provide services to our community.”