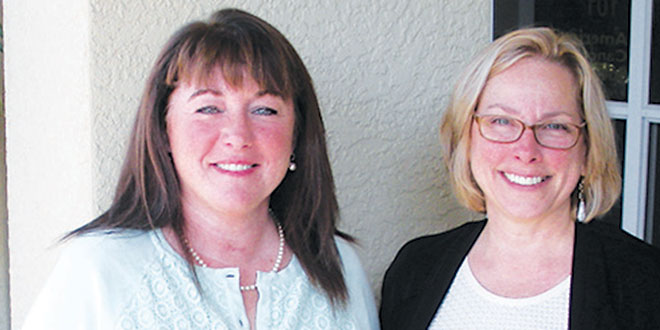 The new year has included changes at the Marco Island unit of the American Cancer Society with two of its mainstays assuming new titles and responsibilities.

They assumed their new posts in January.

In her new role, Honig is responsible for all ACS galas and Cattle Barons Balls in her territory. However, she will still be based at the Marco office, where she has worked for a little more than two years.

“What a lot of people have been concerned about is (whether) I still have responsibility for our overall interaction with the community and our board,” said Honig. “That’s the first question people ask me is, ‘are you leaving Marco’ and the answer is no.”

Olszak’s duties had included orking with volunteers, assisting Honig with events such as Relay For Life and working with cancer patients who visit the office for wig fittings, the Road to Recovery program and other services.

Her new post entails overseeing two of the unit’s major fundraisers, April’s Relay for Life and next week’s Imagination Ball. But she’ll also still spend time interacting with the volunteers and ACS clients, as she did in her old job.

Also unchanged is the fact she will report to Honig.

“So I still have all the responsibility for everything that goes on here, so it all ties together nicely,” said Honig.

The job of executive director at the unit was eliminated as part of the reorganization. An additional person will be hired at the office to help with event support.

“I’m thrilled to take on the additional responsibility for the galas for the Southwest Gulf Coast, while still maintaining my relationship with our board and all the American Cancer Society events on Marco Island,” said Honig.

The duo is eagerly anticipating the two fundraisers on the unit’s calendar over the next two months.

Olszak said the Marco unit finished fifth in the state of Florida in its Relay For Life fundraising. The event is set for 11 a.m. to 11 p.m., April 18 at Mackle Park. The Imagination Ball will be held Feb. 28 at the Marco Island Marriott Resort, Golf Club & Spa. Tickets are $250 per person and a limited number are still available.

To purchase Imagination Ball tickets or for more information about Relay for Life or ACS services, call 642-8800.