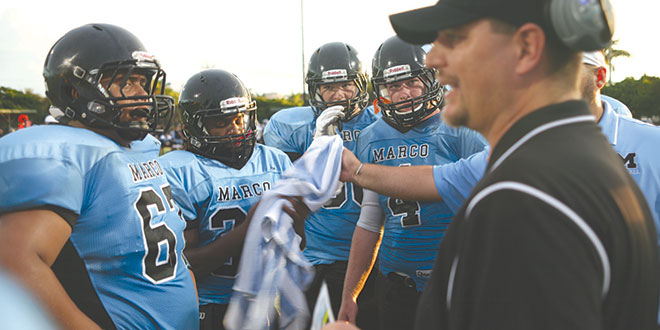 MIA Head Coach Greg Fowler talks to his team on the sideline. PHOTO BY ROGER LALONDE

How good is the Marco Island Academy football team?

It will get a major test in hosting Community School at Winterberry Park at 7 PM on Friday night, Sept. 19. The Seahawks have manhandled three opponents, outscoring them 139-8, with its most recent a 42-7 win over Fort Myers Canterbury.

Marco Island has won two straight, outscoring its opposition, 84-6, with its most recent victory over Somerset Academy Charter High, 35-0. The game was called midway through the third quarter when the Somerset coach took his team off the field following a skirmish that resulted in three players being ejected.

Patrick Michel was the Marco Island player ejected, while Somerset lost Jonathan Caula and Jorge Gonzalez. The referee in charge said all three threw punches. Michel received a three-week suspension from the Florida High School Athletic Association; it was not certain what punishment was dealt the Somerset players.

Michel has been one of the outstanding players on the team as a running back and linebacker. In the game, he scored on rushing and passing plays. He led the team in tackles with eight.

Reeves Carlisle will take over on defense for Michel, while MIA has “a lot of weapons on offense,” Coach Greg Fowler said.

The team’s season-opening two-game win streak ties the 2013 team for wins, although one of the two 2013 wins was a forfeit. In two games this season the offense has totaled more than 850 yards. Stalwarts on offense have been Fowler’s son, Andrew, at quarterback, Cole Stretton at wide receiver, running backs Cayden Couture and Tyler Gresham, and a good offensive line. Gresham, Couture and Stretton also play defensive backs. Stretton turned a pass interception into a 76-yard touchdown against Somerset.

Gresham also scored on a pass play. In the game, Fowler was 11 of 15 on passes, with three touchdowns. His 153 passing yards and his first game passing yardage, 273, gives him a total of 429.

Matchup of MIA’s offensive line against a very strong Community School defense is one of the keys to victory on Friday. Community’s defenders held Canterbury to a minus-10 yards rushing and intercepted two passes for scores.

“The offensive line staying healthy and fresh is a big concern,” Coach Fowler said. “Over their (Community School’s) last 15 games they have won 14. Their defense will be tough, but I think we can matchup. I think it will be a great game and could go down to the last minute.”