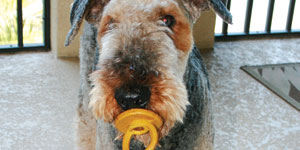 Let’s take a look at the last year, for example. Our family added a second dog. I subsequently “learned” that I did not like having another dog around. Specifically, I “learned” I really don’t like Chihuahuas.

However, I also discovered that my daddies were smart enough to see through my plan to return the “Chihua” to our local Taco Bell on the South Trail.

“Hey Chihua, they aren’t looking. Quick, jump in that window and round up our food. We’ll wait for you—TRUST me.”

The result: the Chihua got an extra Cinnamon Twist to appease his “pain and suffering” and my “selfish” actions are apparently the reason Taco Bell permanently removed the coveted Chili-Cheese Burrito from the menu.

Truth be told, I have spent my life living with a big secret—so big, in fact, I didn’t know it myself.

Don’t get me wrong, I’m super HOT and I certainly turn some heads and wag some tails but I have also been subject to taunts and jests from the other dogs at the Marco Dog Park: “Tony is a POODale, Tony is a POODale!”

They tend to shut up though after I go pee pee in their portable water bowls.

My overly sensitive daddies have always assured me I was a purebred Airedale—though they never could quite manage to serve up the papers to prove it. 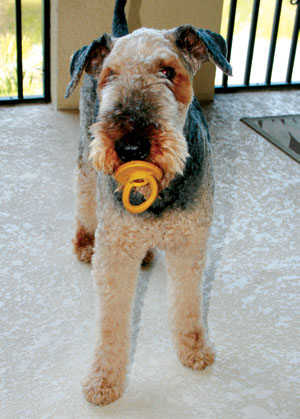 was a bitch of questionable morals, I still couldn’t bring myself to believe that any self-respecting Airedale would stoop so low as to schtupp a Poodle!

Finally, after all these years, my Facebook Friend, Lily Airedale, gave my life brand new meaning: it turns out I am a “Sheepcoat Airedale.” I’m legit!

Having since then joined an online Support Group for Sheepcoats—uh, that’s not a joke—I have learned that the Sheepcoat is a very rare, very special coat type.

But what’s more, I am not alone.

Yep, we all get older, but that does not mean we have to stop living and loving and learning and licking ourselves inappropriately in public places.

My Short Daddy (the emotional one) is 50 and is determined to focus a part of his career on helping people (www.rediscovercourtesy.org). And though he gets discouraged and constantly complains that “no one really cares,” at least he cares enough to try.

My Tall Daddy (the fun one) is 51 and never met a party he didn’t like. Of course, as the sidewalks on Marco Island roll up every night at 9 o’clock, he’s able to explore his inner party animal yet still be home by 9:15 for a quick Downtown Abbey re-run before going to bed.

As for me, now that I’m secure in my Airedale lineage, I am trying to be a better being.

Just last week I resisted the urge to raise my leg on the squatting Chihua in our side yard. (Baby steps. Baby steps.)

But the best part of the illustrious group of Sheepcoat Airedales is that we apparently don’t show our age.

You know, I may be 11 now but, with the perpetual Fountain of Youth genetically situated at my side, I’m actually looking forward to seeing what I look like when I’m 22!

Tony Wakefield-Jones is an 11-year-old psychologically gifted Airedale. He is on Facebook at  facebook.com/tony.wakefieldjones and his complete body of work can be found at attackbunnies.com.