A Thankful Year in Review 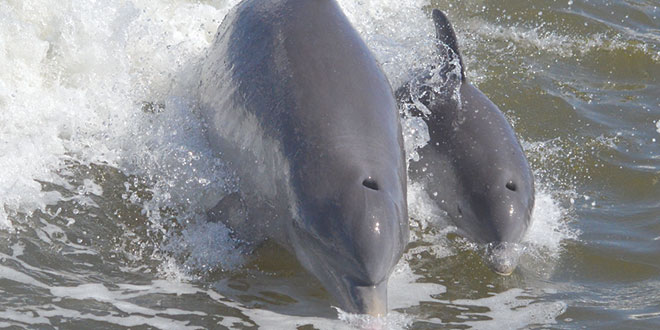 It was a banner year for baby dolphin births in our area; Mom Giza shows off her newborn, Freedom. Giza also became agrandmother this year. PHOTO BY BOB MCCONVILLE

The pessimist complains about the wind. The optimist expects it to change. The realist adjusts the sails. ~ Wm. Ward

What a fantastic year this has been! I would like to thank the Coastal Breeze News for allowing me to be a part of their team. It has been an honor and I am humbled. I would like, even more, to thank those who read my contributions to this paper. Your positive feedback and constructive criticism have made me a better person (although I like the compliments more than the criticism).

One of my favorite sayings “If there’s one thing that’s constant in life, things change” certainly rang true in 2015. Let’s review a few highlights of the year.

On board the Dolphin Explorer, as a naturalist for the only dolphin survey team in South Florida, there was lots of excitement in the water. Two-year-old Skipper, rescued from a fishing line entanglement in 2014, is maturing and doing well by mom’s side.

Another calf turned one this fall and also survived a serious injury this past summer. Rose suffered some type of puncture wound and, through constant monitoring by the survey team, it appears to be healing nicely. Rose’s behavior is now normal.

Eight baby dolphins have been seen in the area since mid September. Nine-year-old Sintas gave birth to her first calf. Giza, mother of Sintas, also gave birth this fall making her a mom and a grandmom in the same year! Other moms are Chip, Victoria, G2, Cosmo, Mama Bear and an unknown female from the Naples area now seen around Marco. This is a banner year for newborn dolphins.

In the Big Cypress Swamp, a great horned owl made its presence known by taking over a red shouldered hawks nest and producing hatchlings.

The two resident bald eagles in that area also made room for a young one last winter. They are back on that huge nest again this

fall. Several barred owls can be heard in the trees and alligators are usually present in the ‘gator hole. Night herons and wood storks and other birdlife helped make this a place of magical sightings for the year. My favorite adventure in the Big Cypress…a juvenile bobcat followed me inquisitively for nearly 200 feet down the boardwalk one day (I wasn’t sure if I was on the welcome list or the menu!).

In general, there has been a lot of talk about the continual invasion of Burmese pythons into new land as they seem to be seen more often closer to Marco Island. Bird, rabbit and other small animal populations seem to be dwindling as these constrictors eat their way from Florida’s east coast toward our region. It will be a pleasure to participate in the upcoming Python Challenge this January to help raise awareness and eradicate these invasive reptiles.

The Florida black bear hunt this year ended on the second day. With an estimated population of 3,500 black bears in the state, 298 were killed in less than 48 hours.

On a sad note, 37 Florida Panthers have died this year, a record for the state. Of those 37, 26 were killed on roadways.

Taking the bad news with the good, this writer can only give thanks. I am blessed that I can physically, mentally and emotionally enjoy the amazing opportunities that nature has placed before my eyes.

My New Year’s wish for all of you? Be wise enough to adjust your sails as the winds change. Be aware of your surroundings and smile when nature places those surprise moments in front of you. Let those special memories live within your soul forever!

HAPPY NEW YEAR TO EVERY ONE OF YOU!

Bob is the owner of Stepping Stone Ecotours and is a naturalist on board the Dolphin Explorer. He is a member of Florida SEE (Society for Ethical Ecotourism). Bob loves his wife very much!!