A Tale of a Quest 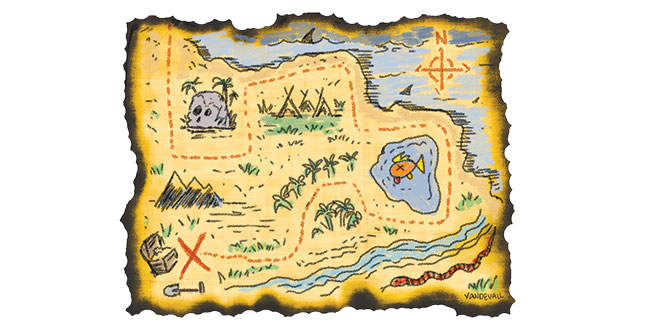 It is almost time for the big reveal. On Friday, April 11, at 3 PM, The Harbor Goldsmith will send the $10,000 “Marco Green Diamond” home with one lucky customer.

It has been a long-time coming. According to Richard Alan, owner and resident goldsmith at The Harbor Goldsmith, he has had the 1.43-carat green diamond in his Island Plaza shop for five or six years, and he made the solid, 18-carat gold setting about ten years ago. “I’ve had many colored diamonds in the store,” Alan says. “Blues and yellows and cognacs sold well. Green, on the other hand, sold not so well.”

Never one to shy away from controversy or a challenge, Alan devised the “Quest for the Marco Green Diamond” to help drum up interest in the $10,000 setting, as well as to generate some fun and intrigue and get some new faces in the shop. Looking to Marco’s pirating history, he created a treasure map and wrote corresponding rhymes and limericks for clues. “I drove around the island on my Harley, and searched for places and things that would correspond to certain numbers,” he explains.

The quest was launched back in February with a proposed giveaway date of Monday, March 17 — in honor of St. Patrick’s Day. Unfortunately, Alan was foiled by a state bureaucracy. “Apparently, in the state of Florida, you can’t just give away a $10,000 diamond ring without permission or a permit,” he quips. “Delays, misunderstandings and bureaucratic state B.S. with roll of red tape made the St. Patrick’s Day date impossible.”

Over the course of the last six weeks, some 100 people have strolled into his shop looking for a treasure chart. It’s less than he expected, but still a decent turnout. He printed up 200 charts. To qualify for the April 11 drawing — which will be conducted at The Harbor Goldsmith by a blindfolded employee — questers must return their completed and correct treasure charts to the shop by 5:30 PM on Thursday, April 10.

Alan is certain whoever wins the ring will be happy with the outcome: “People who have seen the ring in the window became enamored by it.”

If you haven’t gotten your official treasure map yet, run by The Harbor Goldsmith at 680 Bald Eagle Drive to request one and get in on the chance to win the $10,000 “Marco Green Diamond.”

Here are the clues once more:

Five consecutive coordinate numbers is what you seek:

Clue 1:
An Island logo that’s been in plain sight and the fact the island of San Marco has never possessed such a structure is quite unique. Many a navigating mariner has searched for its guiding path as the daylight wanes to avoid a deadly catastrophe. It bears the colors of bleached bones and the Caribbean Ocean, and upon it, there the first course number you will see.

Clue 2:
In the land of Good where buzzards lope, they come near and far, While this big salty lady sits silently by a minuscule bar. Safe and dry while cradled high, Your second numbers appear twice to the sober eye.

Clue 3:
On the island of San Marco in the vicinity of isle marker six and not far from the sea, There is a house of worship with its seat in a faraway place, the one and only Holy See. It’s magnificent belfry spire tall and proud, Has twin instruments that can be quite loud. The answer is not how many las companies you count and don’t go seeking too late, But how many las companies would the spire accommodate?

Clue 4:
A vast me hardy’s, it is considered a scare and magical number in days of old. This same number is how many raging seas could be sailed and make even a pirate’s bloom grow cold. Landlubbers and seamen play this gambling game created with bleached bones or of ivory square. This number has six in thirty-six chance or one-sixth probability to magically appear.

Clue 5:
A famous watering hole is a hustle and bustle all afternoon and night. One can eat and drink while sea-going vessels pass and dolphins play with utmost delight. Upon a sign in its lot, the fifth number is posted for the advised safe-moving speed, And that number for speed land-roving vehicles seeking parking must heed.