A Super Day for a Souper Bowl 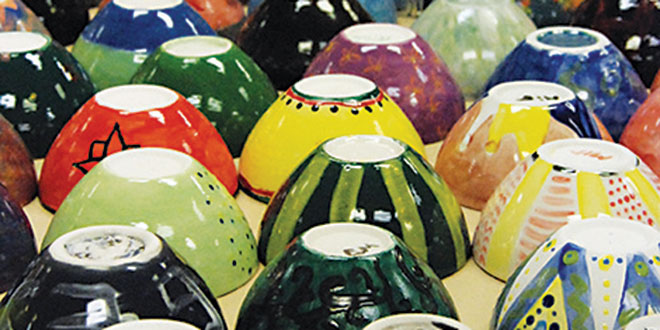 The beautiful Southwest Florida winter weather brought the Marco Island community out in droves on Saturday, Jan. 31, to the Marco Island Chamber of Commerce’s Third Annual Souper Bowl-Marco 2015. The event, which raises funds for the Leadership Marco Scholarship Fund through the sale of original, hand-painted soup bowls, entertained and fed more than 1,000 islanders.

In fact, folks were lined up a half-hour before the 11 AM start, and received a front row seat of the event preparations, which included CJ’s on the Bay Chef Laura Owen testing all of the soups to make certain they met health code

Moreover, close to 1,000 bowls made by students from Tommie Barfield Elementary, Marco Island Charter Middle, Marco Island Academy and Lely High School sold out in less than an hour. Volunteers in the “bowl barn” — the area from where bowls could be purchased — estimated that someone moved through their line to buy a bowl every 3 seconds.

“Early on, we realized we had to limit the attendees to one bowl each just to try to ensure everyone an opportunity,” said Jada Shigley, co-chairperson of Souper Bowl-Marco. “We were overwhelmed by the outpouring of community support for the event.”

out on how much money was raised, as the Chamber’s Education Committee finalizes invoices and expenses. Still, Shigley is optimistic. Sponsorship dollars were up, along with money raised on the day of the event through the sale of the bowls and the silent auction, which featured one-of-a-kind bowls designed and decorated by well-known local artists. This year’s artists included: Kim Belange, Carolyn Burger, Don Harthorn, Judy Harthorn, Lee Horton, Emily James, Frances Kut-Best, Betty Newman, Katherine O’Hara, Tara O’Neill, Bruce Robertson, JoAnn Sanborn, J.J. Stinchcomb, Karen Swanker, Malenda Trick, Kathy Von Dorn Banks and the Clay Guild of the Marco Island Center for the Arts.

[/caption] width=”200″ height=”105″ />In its first two years, Souper Bowl-Maco raised more than $26,000 through the sale of more than 1,800 soup bowls. Last year, seven scholarships in the amount of $2,500 each were awarded to local high school seniors as a result of the funds raised by Souper Bowl-Marco and other events sponsored by the Chamber’s Leadership Marco Scholarship Fund.

The stars of this year’s event, though, definitely were the soups. At least five of the participants ran out of their scrumptious concoctions within the first hour, despite an increased minimum limit of 15 gallons. The ownership at Stonewalls actually brought extra soup from the restaurant when the 20 gallons they

“I’d say overall the event was a huge success with great potential and lots of ability to grow and improve in the years to come,” Shigley noted, “but only if our community continues with their wonderful outpouring of support.”