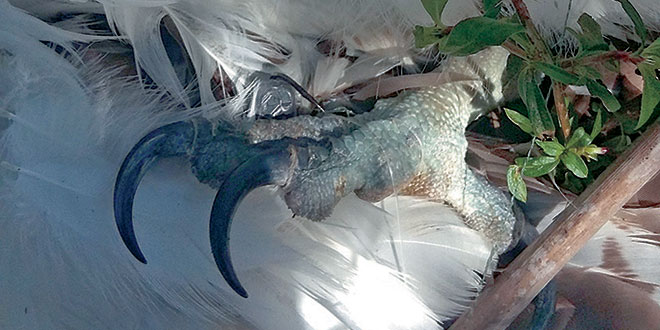 Monofilament carelessly left in the environment entangled this osprey,resulting in death. SUBMITTED PHOTO

A dead osprey was reported to be hanging from a pine tree near the fire station on San Marco Road this week. When city staff arrived, the osprey had already fallen to the ground. Its left talon was hooked by a circular fishing hook, and the body was wrapped by the line several times over with braided and monofilament fishing line. Even more heartbreaking, was the sight of the osprey’s partner perched in the tree over its dead mate. Reportedly, it was crying out for hours as its mate was hanging from the tree by the fishing line.

Abandoned fishing line is a significant pollution problem throughout Florida. Every year the Florida Fish and Wildlife Conservation Commission (FWC) reports hundreds of dolphins, manatees, sea turtles, birds and fish entangled or dead with ingested monofilament. Fishermen are asked to be responsible for their line, to dispose of it properly, and to not leave it behind.
What can you do to prevent bird entanglement?

Don’t feed pelicans and other waterbirds. This causes them to congregate in areas where they are more likely to get hooked or tangled in fishing line.

Discard fish carcasses in lidded trashcans. Birds will feed on carcasses tossed in the water, which can lead to injury or death. Birds attracted by fish carcasses may gather in areas where they are more likely to become entangled in fishing line.

Cast away from birds and shoreline vegetation.

Collect and store loose monofilament line until it can be discarded properly.

Let other anglers know how to prevent bird entanglement.

If you do hook a bird on your line, don’t cut the line!

“The first thing to know is don’t cut the line,” said Kevin Oxenrider, a biologist with the FWC. “Birds that fly away with hook and line attached are at risk of getting entangled in trees and dying. And that line is left to possibly snare other wildlife.”

The FWC has come out with these steps to rescue a hooked bird: Reel in the bird. Remove the hook. Release the bird. Go to www.MyFWC.com/unhook for details.