A Royal Tern of Events 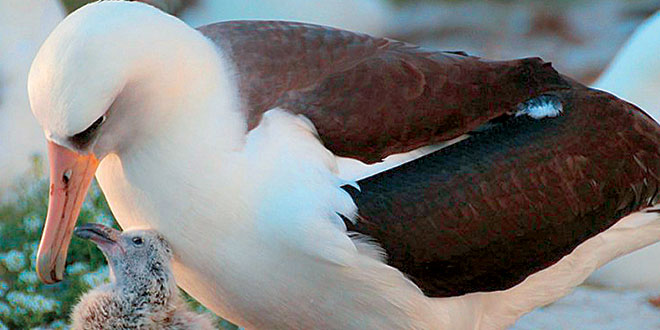 It was July 1985 in Beaufort, North Carolina when John Weske and Micou Brown banded a royal tern chick and set it free. President Reagan was in his second term as president and the blockbuster movie was about a young man accidentally sent 30 years into the past, called “Back to the Future.”

Fast forward to May 17, 2016, Keith Gahagan of Naples was walking near the Naples pier and found a dead royal tern. He noticed its silver band and took the bird to the Conservancy of Southwest Florida’s Wildlife Clinic. The eight-digit code on the silver band meant that it was part of a research project coordinated by the United States Geological Survey (USGS). Colleen Cosgrove of the Conservancy reported the band number to the Bird Banding Lab, a branch of the USGS. Jen McKay of BBL 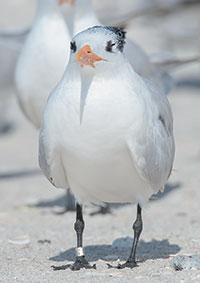 confirmed that the bird was 30 years and 10 months old, and the oldest known royal tern.

News about the recovery of a banded 30-year-old royal tern travelled fast among shorebird researchers. Lindsay Addison, a coastal biologist for Audubon, North Carolina grew up in Southwest Florida and spent a lot of time exploring the Ten Thousand Islands. She was very excited when she heard the news.

Lindsay was acquainted with Keith Gahagan, who brought the royal tern to the Conservancy. As young adults they both volunteered at the Naples Players. Lindsay also works with John Weske, a researcher who has been banding terns in Virginia and North Carolina for 30 years. She also confirmed that the silver band is going back to John Weske.

Royal terns breed from Maryland down the Atlantic seaboard and through the Gulf Coast to Texas. They winter from

Florida into the Caribbean and Central America. According to Lindsay, whenever a banded bird is found it is telling a story in a simple message, “I’m here, this is what I need.”

Banding also connects people. Lindsay knew everyone connected to the banding and recovery of the 30-year-old royal tern. “It reminds us to notice and appreciate the natural world around us and the many cool things that happen every day, like terns living three decades,” Lindsay said.

B95 Moonbird is a red knot the size of a robin. Documented to have flown 325,000 miles, the distance to the moon and back, earned him the nickname Moonbird.

According to Jean Hall, a Shorebird Steward, “We do see red knots at Sand Dollar Island. They migrate 9,000 miles twice a year from the top of the world, from Tierra Del

A flock of red knot: the orange band indicates banding in Argentina. Photos by Jean Hall

Fuego to the Canadian Arctic to breed.”

The Arctic tern makes the longest migration flights of any living species, making an annual roundtrip flight of 25,000 miles.

Wisdom, a Laysan albatross, is 65 years old and hatched a chick in February 2016. Her bander, Chandler Robbins, is 97 years old and still visits Wisdom when she returns to Midway Atoll to breed. Wisdom is the oldest known bird mother in the world.

These birds are the frequent flyers of their species and with great navigational skill, physical toughness and a lot of luck they continue to push their limits each time they take flight. They are symbols of hope for all bird species.

How You Can Help: If you see an injured or dead banded bird, first take a photo and note its location. Then call the Wildlife Clinic at the Conservancy of Southwest Florida at: 239-262-CARE (2273).