A New Stage & a New Page 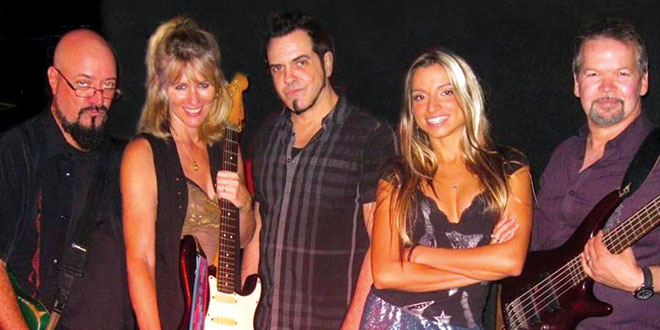 Last week, when this story first came across my (virtual) desk, I, being of confident heart, and sober mind, had a little bit of an epiphany, of sorts. Yup! It occurred to me, that over the years, on this little Island, somehow, some way, a small number musicians and entertainers have not only survived the test of time, but actually thrived in the Southwest Florida musical “climate.” Of course, the “winter” season, or as it’s affectionately referred to by the locals as simply, “season,” is by far the year’s highlight.

Jezebel is a fun loving co-ed six piece band, known for playing rock, reggae, blues, top 40 dance hits and party favorites. Although its origins came as an all female act, lead singer, Robyn Fear, explained to Music Notes that when she decided to bend on the “all girl” thing, a live rhythm section replaced the backing tracks. With Oscar now holding down beat duties on drums, and Moe on the electric bass, Robyn chose to add to the band’s name.

Now known as “The Sunset Bay Band featuring The Jezebels,” they will be playing live on Friday nights at Vandy’s/5 Brothers at 1089 North Collier Blvd in Marco Town Center. Though the band had consistently played at Porky’s, the lure of a brand new stage, and a big push in the entertainment department, Vandy’s/5 Brothers will be the band’s new home on the island. Showtime is, again, every Friday from 9 PM until 12:45 AM.

Great pizza, along with many other delicious dishes, and a full bar are among the other attractions at the newly revamped Vandy’s/5 Brothers.

Robyn Fear, who plays a Fender Strat and holds vocal duties, originally started the band, and has since then made some personnel changes. Now the band will feature Jimi, from Ft Lauderdale on lead guitar, and rotating on keyboards, will be Morgan and Angelo. Although Robyn is the main singer, the show often includes vocalists Karina, Angel and Elexis. They will be a nice relief of rockin’ sounds for the quiet times during the summer months.

If you would like more info on Robyn, Jezebel or The Sunset Bay Band, log on to their site at sunsetbayband.com.

For more information regarding food, drink other performances at Vandy’s/5 Brothers, call 239-394-5100 or visit the website at www.vandys5brothers.com.